Mary Jane Clark, the best quiltmaker in her community. 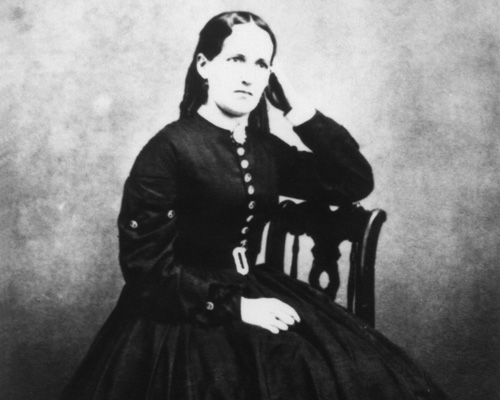 In 1842, when Mary Jane Caprenter was seven years old, she and her family moved from their home in New York to Michigan and settled in Wayne County. In 1859 she married Woodbury Clark, who had also moved from New York via the Erie Canal to Michigan in 1838.

By the time she married, Clark had made 15 quilts for her hope chest and at least one quilt for the hope chest of another. As her family grew - the Clarks had three children - she continued quilting, working alone on one quilt per year for the family and working with a group on one quilt per year for the church. Her granddaughter, Gail Clark, remembered groups quiling in Mary Jane's Belleville home. Several people would sit together around a large frame set up in the front room. The materials used were usually purchased at Potter's General Store in Belleville, but once Mary Jane included a piece of her wedding dress - a dark-maroon silk taffeta - in a Crazy quilt. Because of her selection of colors and her use of even quilting stitches, her sisters thought she was the best quilter in the community. Gail saved many of the better quilts in a cedar chest so they wouldn't become worn. Because of her foresight, the family now has eight or nine well-preserved quilts. 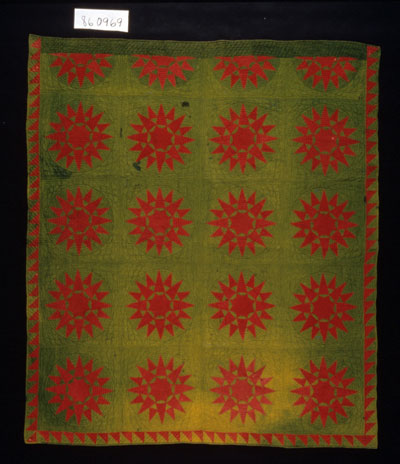 Clark's Christmas Star quilt, shown here, is thought to have been made as a dowry quilt, which means it would have been made before her wedding on December 22, 1859. The top is made of solid red and green cotton blocks that have been pieced and quilted by hand. A saw-tooth border accents the three sides. Solid khaki material has been used for the seven-piece back. Clark combines diagonal lines of quilting on the border and in the star center with clamshell designs from the edge of each block up to the 11 concentric circles that pass through the arms of each of the stars.

The few worn spots on this quilt are in the red fabric on the border and in the stars. As a treasured family heirloom, it has been in the protective hands of four generations: Kate Crysler Clark, married to Mary Jane Clark's son, Ralph; Gail Clark, daughter of Kate and granddaughter of Mary Jane. Peters, the present owner, is a quilter herself.

Farmer who came to Michigan in 1842 from New York State