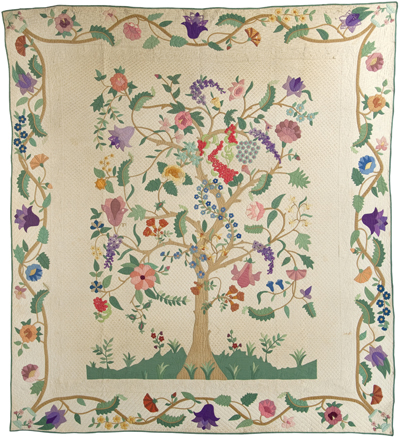 During the 1930s, The Detroit News was a major sponsor and supporter of quilting. By the decade’s early years, the newspaper was offering quilting patterns and was regularly featuring quilting in its Beauty in the Home column. In 1933, the column’s editor, Edith B. Crumb, launched a quilt club that readers could join and share letters about their quiltmaking activities. By 1934, the response to the quilting club was so strong that a new column, Quilt Club Corner, was launched. The column featured quilting news from club members, profiles of quilting clubs, and news of quilt shows. The paper also underwrote a quilting program on WWJ radio.

In late 1933, Edith Crumb announced that The Detroit News would be sponsoring a quilt show to be held November 17-19 at the Detroit Naval Armory. More than 1,500 quilts were entered and more than 10,000 visitors viewed the show. The shows continued into the 1940s. In 1940, this Tree of Life quilt made by Bertha Voelker won the Grand Prize at the show.

The Detroit News has retained very little archival material about the column. Today, we can piece together the history of the column through family stories and quilt column clippings. The MSU Museum is currently digitizing and adding to the Quilt Index materials related to this part of our state’s quilting history.

Bertha Voelker was a prolific quiltmaker and a leading member of the Detroit News Quilt Club Corner (1932-1940). She won many awards for her quilts and was frequently mentioned in the Detroit News. This quilt won the best of show award at the 1940 Detroit News Quilt Show. It was made for her grandson, Charles Voelker, who donated it to the MSU Museum.

Details about why the quilt was made:

Quiltmaker's date and place of death:

Where does/did the group meet?

Describe the type of inscription:

Tree of Life Chas J. Voelker (made specifically for him)

What is the date inscribed on the quilt?

Photos of quilter; Clippings or photocopies

This quilt was donated to the MSU Museum by Charles Voelker. His grandmother Bertha, made this quilt as a gift for him.

Historic Museum Pattern Is Copied by Quilter by Edith B. Crumb The favorite pasttime of Mrs. Charles Voelker, 12055 Harwell avenue, is making quilts from difficult patterns. Her latest achievement in this line, a Tree of Life quilt, is shown in the picture. Mrs. Voelker first got the idea from a news paper clipping showing a seventeenth century woven bedcover which hangs in the Metropolitan Museum in New York. Mrs. Jane Howie, Walled Lake, took the clipping and enlarged it to a size suitable for a large quilt. Mrs Howie lkes to figure out difficult patterns as well as Mrs. Voelker likes to make them into a quilt, so they are a good team. It took Mrs. Voelker 11 months to complete this quilt. A study of the design will give you some idea of how much planning had to be done for the color scheme. MANY COLORS The trunk is brown, the grass medium green and the small plants several shades and tints of green. The flowers in the centers of the border are of varied shades and violets. Almost every other color imaginable has been included in the tree. The background of this quilt is white and the binding green. The field of the center panel is quilted in a diamond lattice, outside of which is a narrow conventional flower, quilted. The border is in chevron striped quilting. Mrs. Voelker has put the name of the pattern and the name of her grandson Charles Joseph Voelker, who is to inherit the quilt, in white quilting. Photo caption: This quilt which is known as the Tree of Life pattern is a very difficult one to make. It was enlarged by Mrs. Jane Howie from a small newspaper clipping and the quilt was made by Mrs. Charles Voelker. Both have been members of the Quilt Club for several years. Bertha Voelker received ribbons and awards for the following shows as listed. I, her grandson's (Charles Voelker) wife now have these ribbons: Honorable Mention - Detroit News Quilt Club - 1935 First Premium Domestic and Applied Arts - Mich. State Fair 1936 Special Premium Finished Quilt Unspecified Pattern Detroit News Quilt Show - 1938 Honorable Mention - Detroit News Show - 1938 Honorable Mention - Detroit News Show - 1940