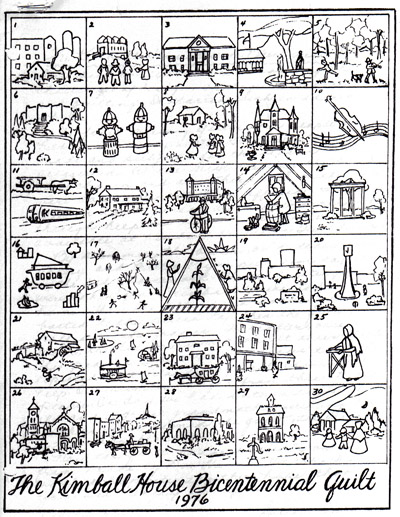 Name of the group that made the quilt:

Details about why the quilt was made:

What is the date inscribed on the quilt?

Describe where the inscription was found:

Sketch and book explaning each block and its meaning.

The Kimball House Museum Bicentennial Quilt has been an experience involving the challenges of design, applique, embroidery and quilting. It started an idea and a hope. The first meeting of interested people was held on February 12, 1976. General plans were made and subjects for the blocks were suggested. At the next meeting the blocks were chosen and at a third one, materials were available and help offered. From then on each person worked independently, though help and extra materials were available at Kimball House on Tuesdays. By summer the blocks, or "patches," were ready and Millie Payne put them together in the red framework. The old quilting frames were taken from Kimball House to Alice Dean's home. There the filling and backing were basted to the pieced top, then the quilt was rolled on the frames. Thereafter, once a week, the designers met to quilt their blocks. This proved to be a more tedious task than expected but nine new people came in to help. Our number ranged from three to nine people. One day we had both an eighty-year old and a great grandmother quilting. All workers have signed the quilt, the designers in their own blocks. Now the quilt hangs proudly on the frame made by Don Hanna. We who have worked happily together hope that you will enjoy our effort.