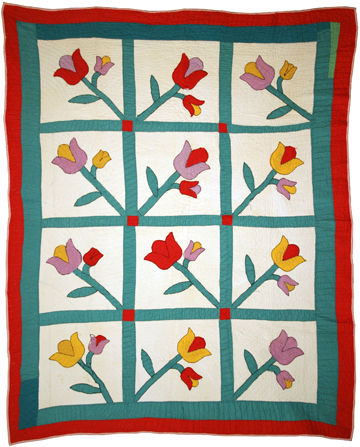 Minnie Benberry was Cuesta’s mother-in-law. During the Great Depression, the government hired artists and craftspersons to make quilts as a part of the Works Progress Administration (W.P.A.). Cuesta discovered that a W.P.A. social worker working in rural western Kentucky gave this quilt’s tulip pattern to quilters in the region. The farm families, scattered over a wide area, were unaware that other families had received the same pattern. When the women gathered in the spring at the churchyard to quilt their tops they were surprised that they each had used the same pattern. They decided to name the pattern “W.P.A. Tulip.”

By Mary Worrall, from the exhibit Unpacking Collections: the Legacy of Cuesta Benberry, An African American Quilt Scholar.

Biography of the quiltmaker?

Some of the pieces are coming loose from the background fabric, not unusual in raw-edge applique work. The binding is coming loose in several places. Quilt has been laundered. Hole in green border.

Separated by sashing with cornerstones or connecting blocks

What color is the back of the quilt?

half inch - one inch

Width between quilting lines (in inches):

This quilt was collected by Cuesta Benberry to further her research on quiltmaking and/or African American quiltmaking. Her son donated the collection to the Michigan State University Museum when she passed away in 2007.

The quilt was made to be used for:

Describe anything about the design of the quilt that wasn't already recorded in a previous field.

Mrs. Benberry noted that this quilt was one of the WPA quilts from the Great Depression era. She explained that the government hired artists and craftspersons to make quilts during that time of economic hardship. This program served two purposes: These quilts were something of use, utilitarian, yet beautiful and also gave work to talented Americans who had no other means of employment. She noted that the quilt was made by Minnie Benberry, her husband's mother (her mother-in-law). A WPA social worker came to the area of Kentucky where the Benberry's lived. "The pattern was brought to rural western Kentucky...by a WPA social worker, and given to families that wanted it. The farm families, scattered over a wide area, were unaware that other families had received the same pattern. When the women gathered in the spring at the church yard to quilt their tops..., they were surprised that each woman had the same pattern on her quilt top. They named the quilt design the 'W.P.A. Tulip' because of the social worker who gave the pattern to them."