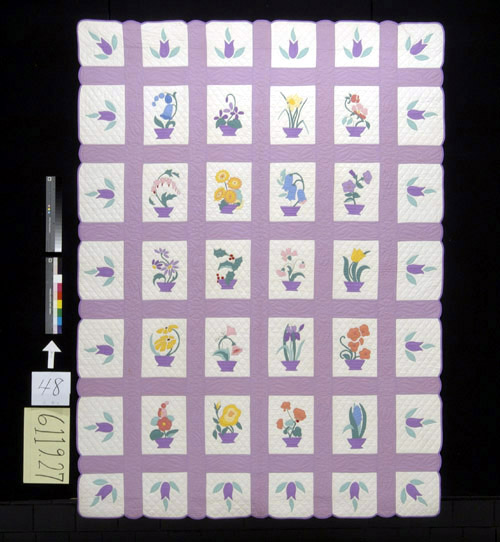 Eveline Foland, who was a designer for the Kansas City Star newspaper, created the pattern used for this quilt. When the patterns appeared one at a time in the Star, they were part of a twenty part series known as “Memory Bouquet.” The pattern was sold to the Detroit News, where, renamed “Flower Garden Quilt,” it appeared during 1931-1932. Foland’s work apparently appeared only in these two newspapers.

Bozena Clarke appliquéd the quilt in 1933 and then quilted it the following year as a gift for her daughter, Laura May Clarke. Clarke’s “Flower Garden” was entered in the 1937 Detroit News Quilt Show.

The Clarke Family Quilt Collection, given to Michigan State University Museum in 1986 by Dr. Harriet A. Clarke and her brother, George M. Clarke, includes forty-five quilts and quilt tops completed between 1926 and 1946 by Bozena Vilhemina Clarke, her daughter Laura May Clarke, and daughter-in-law Emilie Ann Clarke. The collection also includes numerous handmade templates and patterns, unique hand-colored graphs of planned quilts, newspaper and magazine clippings, and personal inventory notes written by the quilters.

What is the number for this pattern from Barbara Brackman's Encyclopedia of Pieced Patterns or Applique?

Quiltmaker's date and place of death:

Worked for a tailor, then as a home maker.

How did the quilt maker learn to quilt?

Describe how and/or why the quiltmaker quilts:

Bozena was an accomplished needleworker when she learned quilt making from members of the Rebecca Jane Circle at her church.

Estimated number of quilts made by this quiltmaker:

Where does/did the group meet?

What are the main activities of the group?

This group quilted each others tops, quilted tops for friends, and made many items (especially aprons) for the church bazaars.

If you chose Other, please describe the corner treatment.

Where is the inscription found on the quilt?

20 floral baskets in center. 42, tulip blocks around the outer edge.

Can you feel or see paper on the quilt that was used as a construction aid?

How wide is the binding (measure the top only)?

How thick is the quilt?

This quilt was made by Bozena for her daughter Laura and was entered in the Detroit News Quilt Show, 1937. The entry tag for the quilt is in the MSU Museum collection.

Commerial name of the pattern for the top:

Image of quilt maker, story of quiltmaker in Michigan Quilt: 150 Years of a Textile Tradition, patterns cut out from the Detroit News, and 6119.48 for handmade templates.

Image of quilt maker, story of quiltmaker in Michigan Quilt: 150 Years of a Textile Tradition, patterns cut out from the Detroit News, and templates.

This quilt was made by Bozena Clarke as a gift to her daughter Laura. It was inherited by Laura's niece Harriet Clarke, who donated it to the MSU Museum in 1985.

The quilt was made to be used for:

Bozena enjoyed the Detroit News quilt column and clipped and collected patterns from it. She also traded among family and friends.