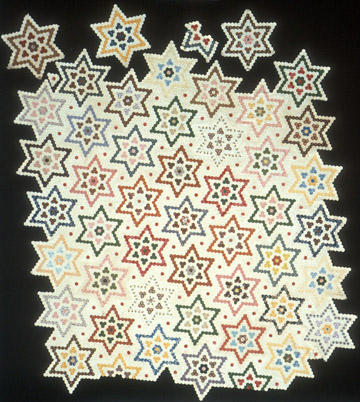 Lucie Barrett was a southern belle who grew up on a plantation near Jackson, Mississippi. Lucie had a French governess, was not allowed out of her room unless properly attired with gloves and a hat, and did not even have to tie her own shoes until the war years. She was known as a “spitfire” and a favorite family story tells of a confrontation she had with a Union soldier, resulting in her quick departure to a seminary in South Carolina.

This quilt top was created during the Civil War by the women of the Barrett family who intended it as a bridal present for Lucie Barrett. Constructed in the English paper piecing method, the hexagons are formed around templates made from old ledgers, letters, sheet music, and printed pages. The quilt was not finished before Wistar Nichols Wright came home from the war and married Lucie. According to granddaughter Lucy Curtis, Lucie Barrett Wright was “too busy for a fancy project” during the years of Reconstruction and referred to herself as “The Queen Bee.” Curtis recalls that it was her grandmother’s hope that someday the quilt would be finished by a family member, but it never was. Curtis donated to the MSU Museum the partially finished top, including blocks, loose hexagons, and a large piece of yardage originally intended for the border.

If this quilt is owned by a museum, enter the accession number here

What is the title of the quilt?

What is the pattern name that it is commonly used among quilt makers and historians for this quilt?

Who made the quilt top?

Who did the quilting?

Choose the time frame that best describes when the quilt was made.

How is this quilt used?

Choose the gender of the quilt maker(s).

What is the quilt maker's birthdate?

She was 16 at the start of the Civil War

If applicable, when did the quilt maker die?

What is/was the occupation of the quilt maker's spouse?

Captain in the Vicksburg Army. After the war he became an accomplished workworker. He died young after contracting blood poisoning after cutting himself with a carpenter's awl.

Did the quilt maker have children? If so, how many?

What type of quilted object is this?

If you chose Other, please describe the edge treatment here.

Irregular, the top is unfinished

What is the best description of the quilt's condition?

Enter the exact inscription here, including dates in the same form in which they appear on the quilt. Do not correct any spellings.

MDL, JRR or JBB, MAT (on the paper backing used to pieced this unit, you can find the practice calligraphy for the initials.)

If you chose Other, please describe where the inscription was found.

What is the layout (or set) of the quilt?

What size are the blocks?

How are the blocks arranged in the quilt?

How are the blocks spaced in the quilt?

What is the width of the sashing?

Connecting blocks made from 34 hexagons

If one shape is used throughout the quilt, what is that shape?

Describe the style of the borders.

Floral striped chintz fabric, not cut but possibly to be used for the quilt's border.

What types of fiber were used to make the quilt top?

What is the source of the quilt's pattern?

Enter the commercial name of the top's pattern if you know it.

List all known exhibits where this quilt has been displayed.

List other materials that exisit about the quilt. This may include oral history, diaries, photos of the maker, templates, etc.

List publications where this quilt or maker was featured.

How did the owner acquire this quilt?

"Lucy was quite a spitfire. According to family stories the night the Yankees came they went into the parlor and found a vase on the mantle piece, with a little confederate flag in it. The soldier claimed the flag was a war trophy. Lucy said, "Here's the flag" and waived it over his head, which infuriated him )"he was probably three sheets to the wind"). Lucy was 16 at the time. He tried to shoot her but was hustled out by other soldiers. He came back several times to do the dirty deed. Lucy was then sent to a Seminary in South Carolina for her own protection. South Carolina was chosen because of family connections. At the seminary Lucy learned to clean her plate-there wasn't much food and what you left was re-served to you at the next meal. Lucy's father was in the battle of Vicksburg, was captured and "paroled." He came home and slept on the front porch to protect the women." --Excerpts from an audio recording of Lucy M. Curtis, granddaughter of Lucy Barrett, recorded in August of 1999.

Made quilt blocks or part of quilt top

Who is the copyright holder?