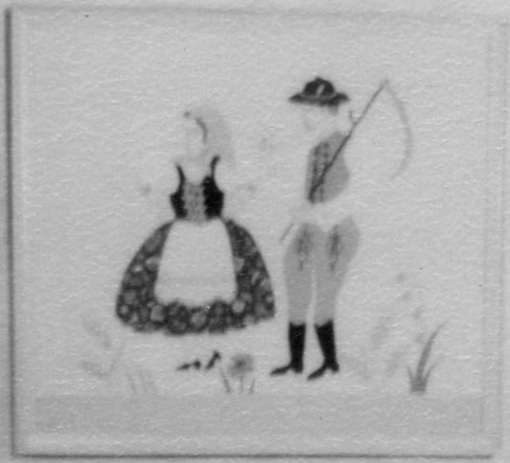 This applique block of the Hungarian farm couple on the Hungarian Harvest Festival quilt was given to younger brother George Mihalovits. Mary made another similar block and inscribed it for her daughter Elsie. That block survives and was inherited by Elsie’s daughter Linda. These two applique blocks may have been trial pieces for the final quilt (#014), a quilt for which Gasperik created her own unique centerpiece. Gasperik also created a trial block of one of the peasant girls. She sent the block to Edith B. Crumb of The Detroit News, the director of its Quilt Club Corner and annual quilt show. That block is pictured and described in Edith's Detroit News, October 22, 1938 quilt column (see page 11). It is not known what became of that block.

CONTRIBUTING INSTITUTIONAL INVENTORY CONTROL NUMBERS: Enter the main control number for this item you are entering.

TYPE OF QUILT OBJECT: Choose the best description for the quilt being documented.

OTHER TYPE OF QUILT OBJECT: If you chose Other, please describe the object being documented here.

QUILT'S TITLE, IF IT HAS ONE: Many quilts have no title, but contemporary quilters often give a name to their quilts.

OWNER'S NAME FOR QUILT'S PATTERN: Enter the name given to the quilt by the owner. This can be the name the family used to refer to the quilt as it passed through different generations, e.g. "Aunt Susie's quilt" or a pattern name that the owner used.

ALTERNATE NAME(S) FOR QUILT'S PATTERN IN COMMON USE: This is the name of the quilt pattern that it is commonly used among quilt makers and historians. It may be different in different regions of the country.

SHAPE OF EDGE: Choose the best description for the edges of the quilt.

SHAPE OF CORNERS: Choose the best description for the corners of the quilt.

OVERALL CONDITION: Choose the best description for the quilt being documented.

TIME PERIOD: Choose the time frame that best describes when the quilt was made. The date does not have to appear on the quilt to enter it in this field. This can be your best guess based on family stories or your own knowledge of quilts.

DATE FINISHED: Enter the date the quilt was finished.

FAMILY/OWNER'S DATE FOR QUILT: If there are family stories that indicate a date when the quilt was made, enter that date.

OTHER DATE ESTIMATION BY WHOM: Enter the name and/or title of the person who estimated the quilt's date for field 23d.

FURTHER INFORMATION CONCERNING DATE(S): If you know anything else about the date the quilt was made, please tell the story.

If this was, as is likely, a preliminary study for making quilt #014 (Hungarian Girls, which was exhibited at the May 1940 Detroit News quilt show), then it was probably made in 1939.

LAYOUT FORMAT: Choose the best description for the layout (or set) of the quilt.

SUBJECT OF QUILT, IF IT HAS ONE: Some quilts are made with a specific intent (e.g. Commemoration of September 11, the 100th anniversary of a town, or an AIDS panel). Enter the subject of the quilt.

FABRIC FIBER TYPES USED IN QUILT TOP: Choose all the types of fiber that are used to make the quilt top.

FABRIC PATTERNS, STYLES, MOTIFS, OR PRINT CATEGORIES USED IN QUILT TOP: Choose all the types of prints that are used to make the quilt top.

MATERIAL USED FOR QUILT BATTING OR FILLING: Choose the fiber content that best describes the material used to fill the quilt.

QUILTING TECHNIQUES USED: Choose the technique that best describes the way the quilt layers are held together.

ANY OTHER FEATURES OR NOTES ABOUT THE QUILT'S APPEARANCE, MATERIALS, OR CONSTRUCTION: Describe anything about the physical appearance of the quilt that wasn't already recorded in a previous field.

Salser believes these two figures were created by Gasperik from illustrations in a book (by Kathleen Mann) of European peasant costume. The body of the woman is a duplicate of the figures of other Hungarian girls, but Gasperik needed to create a different head for this figure, because she represents a wife. Gasperik's head does not sit quite perfectly on the figure's body. The proportions of the man's figure are more successfully rendered. More detailed information (and speculation) regarding Gasperik's design can be found under quilt #014. It is thought that the quilt given to her brother George (surviving only as a photograph), represents the first study, because it appears to be less detailed than this. The centerpiece of the actual quilt (#014) is likely to be Gasperik's final design.

QUILT TOP MADE BY: Enter the name of the person(s) who made the quilt top.

QUILTED BY: Enter the name of the person(s) who quilted the top.

CITY: Enter the name of the city where the quilt was made.

COUNTY: Enter the name of the county where the quilt was made.

STATE: Enter the name of the state where the quilt was made.

COUNTRY: Enter the name of the country where the quilt was made.

HOW WAS QUILT ACQUIRED BY OWNER: Choose the best description for how the owner acquired the quilt.

ANY ADDITIONAL STORIES OR NOTES ABOUT THE QUILT'S OWNERSHIP OR HISTORY: Describe anything about the history of the quilt that wasn't already recorded in a previous field.

It is not known when Gasperik gave the framed block to her younger brother George Mihalovits and his wife Laura. It was apparently something of a joke in George's family that Mary had promised them a quilt - which was never in fact given. George's youngest daughter, Mary Ann Walinski, told Susan Salser about this in 1992, at the time of the Gasperik quilt show in Ravenswood, Livermore. California. As she looked at those 60+ Gasperik quilts hanging in this show, Mary Ann may well have been wondering which one was NOT the promised gift from her Aunt Mary! She explained that the framed Hungarian Couple, seen in this photograph on the wall behind George's sofa, ultimately ended up in the basement of their Chicago home, where it rotted and was discarded.

QUILTMAKER'S REASONS FOR MAKING THE QUILT: If the quilt was made for a specific purpose, choose the reason from the list.

PLEASE EXPLAIN OTHER OCCASION, IF APPLICABLE: If you chose Other, please explain the occasion.

This is probably a study Gasperik made in preparation for the final appearance of the Hungarian Couple on quilt #014.

QUILT WAS ORIGINALLY DESIGNED TO BE USED AS: Choose how the quilt was originally used.

OTHER PREVIOUS USE(S) OF QUILT: If the quilt was used for something other than what it is used for now, please describe. Example: Revolutionary War era ladies wore quilted skirts that were sometimes remade into quilts.

OTHER PRESENT USE(S) OF QUILT: If you chose Other, please explain the quilt's present use.

Mary's grandchildren regard her quilts as a unique collection to be preserved and appreciated.

SOURCE OF QUILT'S MATERIALS: Choose how the quilt maker acquired the fabric for this quilt.

QUILT TOP PATTERN SOURCE: Choose where the quilt maker found the pattern for this quilt.

OTHER TOP PATTERN SOURCE(S): If you chose Other, please explain where the pattern was found.

Source may be a peasant costume book.

COMMERCIAL SOURCE NAME(S): If you know the commercial name of the pattern used for this quilt, please enter it. This may include books, magazines, newsletters, pattern companies, computer software programs, and kits.

ANY ADDITIONAL NOTES OR STORIES ABOUT THE QUILT'S DESIGN OR MATERIALS SOURCE: Describe anything about the design of the quilt that wasn't already recorded in a previous field.

For the central figures, Peasant Costume in Europe, Book 1, (1937) illustrated by Kathleen Mann may be the design source. Gasperik's daughter Elsie, who encouraged her to develop her own design ideas, gave her the book as a gift.

OTHER RELATED ITEMS: List other materials that exist about this quilt like oral histories, wills, diaries, or patterns.

Original photo (source of #096 and #096a) in Karen Finn, private collection.
A second b/w photograph taken at the same time and place shows Mary Gasperik and her two brothers, George and Alex Mihalovits (he changed his family name to Michael Lavitte) sitting on that same sofa, underneath the framed Hungarian couple hanging on the wall behind the sofa at George's house. This second photograph is part of the shared Gasperik family archive.

AVAILABLE SOURCES FOR QUILTMAKER: List other source materials about this quiltmaker such as photos, oral histories, book or newspaper publications, fame for some other reason or event.

OWNERSHIP OF THIS QUILT IS:

AUTHOR/INTERVIEWEE'S RELATION TO THE QUILT:

OTHER INFORMATION ON SOURCE PERSON TO QUILT:

Grand-daughter Susan Salser began this research effort in 1991, after she and her two sisters divided up the quilts which belonged to their mother (Elsie Gasperik Krueger) who died in 1988. Her ongoing research has been fruitful and interesting.

DEATH DATE OF THE QUILTMAKER, IF APPLICABLE:

IN WHICH KIND OF ENVIRONMENT DID THE QUILTMAKER GROW UP?

CITY WHERE THE QUILTMAKER LIVES/LIVED:

COUNTY WHERE THE QUILTMAKER LIVES/LIVED:

STATE WHERE THE QUILTMAKER LIVES/LIVED:

COUNTRY WHERE THE QUILTMAKER LIVES/LIVED:

HOW DID THE QUILTMAKER LEARN TO QUILT?

From guild or club member; Self-Taught

WHEN DID THE QUILTMAKER LEARN TO QUILT?

WHY DOES/DID THE QUILTMAKER QUILT:

OTHER, WHY THE QUILTMAKER QUILTS:

Mary Gasperik made quilts because it was her life passion and greatest talent. As opportunities arose, she entered contests and exhibited them publicly. She also made special quilts for her family.

NAME OF QUILTING GROUP: If the quilt maker belonged to a group, enter the name of the group.

ESTIMATED NUMBER OF QUILTS MADE BY THIS QUILTER:

DID THE QUILTMAKER SELL QUILTS?