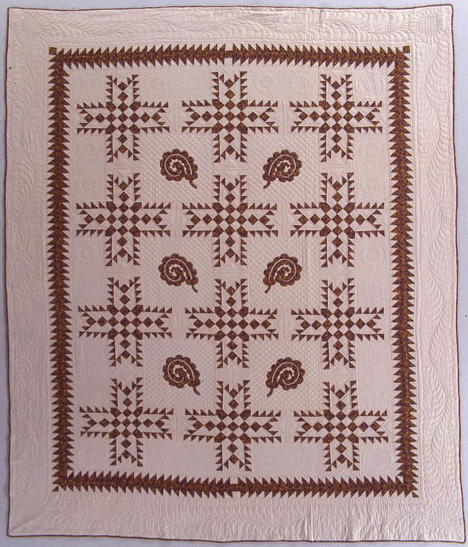 Gasperik followed a custom of expert quiltmakers to look to antique quilts for inspiration and design possibilities. An overall photo of the antique quilt on which this Gasperik design is based appears in Marie Webster's 1915 book. The six appliqué feathers are borrowed from a different antique quilt also featured by Webster and also used by Gasperik (see #006, #045 and #081).

Mary Gasperik made seven quilts that are recreations of antique quilts. They are all based on three different quilts presented by Marie D. Webster in her iconic quilt book Quilts: Their Story and How To Make Them, first published in 1915. The three Webster antique quilts which Gasperik chose as her models are: (1) Indiana Wreath (frontispiece, and praised at length by Webster in her text), (2) "Feather Star (shown in Figure 19, which is a photograph of a complete quilt, made about 1850) and (3) "Feather Star With Applique" (shown in Figure 35, a photograph of only the corner of a quilt and captioned: "This quilt, which is the only one of this pattern, was made about 1835. It was designed by a Mr. Hamill for his sweetheart, Mary Hayward".

Quilt #030 is Gasperik’s re-creation of (2) above. The family calls it “Indian Feather Star” and Gasperik herself called it “Feather Star” (as written on a paper exhibit tag from a Tuley Park quilt show). In order to make this quilt Gasperik recycled a pattern that she had on hand from making quilt (3), the antique Webster calls “Feather Star with Applique” and Gasperik called “Double Feather Star”. It was difficult to translate that Webster quilt into a useable pattern, and, Gasperik enlisted the help of her daughter Elsie to do it. She described this to Edith B. Crumb, the director of The Detroit News Quilt Club Corner and creator of the Detroit quilt shows. Edith wrote about this in one of her quilt columns published in The Detroit News, February 11, 1936, page 24. Even the title of this column (“there are 1467 Pieces in This charming Top”), captures the complexity of the pattern painstakingly created from that small Webster photograph. The article also mentions that Gasperik had completed one black and white top and one red and white top, using the pattern. That red and white version, was shown – completed and quilted – at the 1937 Detroit News Quilt Show. When Edith wrote the 1936 quilt column she evidently did not know that Gasperik had already completed a different red and white version of the quilt, dated 1935. Crumb praised her for making two versions of a very complicated quilt, when, in fact, Gasperik had made three. All of this activity (three quilts) argues that Gasperik was pleased with her achievement and wanted to make good use of the hard-won pattern.

It must have been with some pleasure that she discovered she could use that pattern - yet again - to make a completely different quilt from another antique featured by Webster. Comparing the block on her “Double Feather Star” quilt #045 with the feather star block on her sister Linda’s “Indian Feather Star”, Salser concluded that the same pattern can account for the feather star blocks in both quilts. She believes that her grandmother’s decision to appliqué curved feathers (taken from Gasperik’s re-creation of Webster #035) into the corners of her re-creation of Webster #019 is her way of (humorously) memorializing the connection between the two very different antique quilt reproduction projects. Four Gasperik quilts tell the story (#006, #030 (this quilt), #045 and #081).

Method used to make the inscription:

Date estimated by an antique dealer, quilt historian or appraiser:

One of the pattern elements used in this quilt also appears in a quilt dated 1935. The lime green backing may indicate it was completed at a much later date.

On point or rotated on 45 degrees

What is the shape of the quilt blocks?

What color(s) is the back of the quilt?

Color of thread used in the quilting:

Feather band quilted around entire border. Feathered hearts quilted in the corners. Feathered wreaths quilted 24 times around the border of the center panel

It should be noted that the lime green backing on this quilt might indicate its approximate date of completion. Three Gasperik quilts have an unusual yellow-green backing (#063 - Indiana Wreath and #021 Delectable Mountains are the other two). The year 1953 is quilted into Delectable Mountains. Salser is not sure if the backing is the same color on all three quilts. This can be checked.

Tell the story of how the quilt was obtained:

Selected by daughter Elsie during a division of quilts after Gasperik died in 1969. After Elsie died, in 1969, daughteres Karen, Linda and Susan divided Elsie's quilts. Linda selected this one.

Quilt is presently use as:

Describe present use(s) of the quilt:

Mary's grandchildren regard her quilts as a unique collection to be preserved and appreciated.

Describe the source of the pattern:

Commercial name of the pattern for the top:

Gasperik made her own patterns based on Webster.

Where did the quiltmaker find the pattern for the quilting design on the quilt?

Describe where the quilting design pattern was found:

What is the commercial name of the quilting design used for this quilt?

Exhibitions where this quilt was displayed:

Describe the relationship to the quilt's maker:

Grand-daughter Susan Salser began this research effort in 1991, after she and her two sisters divided up the quilts which belonged to their mother (Elsie Gasperik Krueger) who died in 1988. Her ongoing research has been fruitful and interesting.

How many of the quiltmaker's children were girls?

How many of the quiltmaker's children were boys?

From guild or club member; Self-Taught

Why does the quiltmaker quilt?

Other notes on how the quiltmaker learned, and how and why they quilt:

To exhibit in shows held by her >Tuley Park quilt club in Chicago, the Detroit News quilt show in Detroit, many Illinois State Fairs, at least one Indiana State Fair. She entered quilts in at least 2 Chicago department store contests. She made at least one quilt and one quilt top specifically for the 1939 New York Worlds Fair quilt contest. She also made children's quilts specifically for grandchildren and great-grandchildren; and wedding and wedding anniversary quilts for her son Elmer and grand-daughter Karen. Primarily, she wanted to make quilts because it was her life passion and her greatest talent. The occasions and venues to show them presented themselves. It should be noted that prior to Mary's emigration to America in late 1904, at age 16, she was an apprenticed needleworker in her native Hungary. The intricate and colorful floral embroideries traditional to Hungary lend themselves especially well to applique, the quilt style Mary preferred.

Does/did the quiltmaker belong to a group? Name of the group?

Does/did the quiltmaker belong to a group?

What are the main activities of the group?

Estimated number of quilts made by this quiltmaker: