When Mary Gasperik began making quilts in 1933, the Tuley Park Quilting Club became a central community for her. It was just blocks from her home. With this group of women she learned, shared, and grew as a quilt maker and participant in American civic life.

Quilting was one of many different arts and crafts promoted nationally by municipalities through the cooperation of The National Recreation Association in the 1930’s. It was a public service “for creatively occupying the leisure time of the neighborhood population”.  A series of manuals was published in New York by Leisure League of America.  Quilting by Elizabeth King (1934) was No. 8 in the series.  In Chicago a longer manual, Quilting by Alice Beyer, was published in 1934. Beyer was the instructor in Artcraft for the park district. The booklet featured two of the Park District quilting clubs: the Tuley Park Quilting Club and the Rosemary Quilting Club.  According to Alice Beyer, the Art Crafts Clubs met for two and a half-hour periods, twice a week. Mary Gasperik had easy access to good quilting instruction and quilting companionship in her neighborhood, and she participated in the Tuley Park quilt club with great enthusiasm. The quality, ingenuity and quantity of her quilt product swiftly advanced. The document "917.7311 C432 The Chicago Park District" recording the History and Background of  Chicago’s system of municipal parks, described its quilt clubs in the period when Mary Gasperik discovered quilts and began to make them.

These quilts were made while Mary was a member of the Tuley Park club. It’s not clear if this Double Trellis quilt was made before or after Mary joined the Tuley Park group. Late in life, Mary asked her daughter Elsie to not keep this quilt, probably because she did not wish it to be associated with her work. Instead, Elsie gave it to her daughter Susan. Although red, green and white are the national colors of several European countries, it is interesting that Mary selected colors of the Hungarian flag to make this, perhaps her first, quilt. 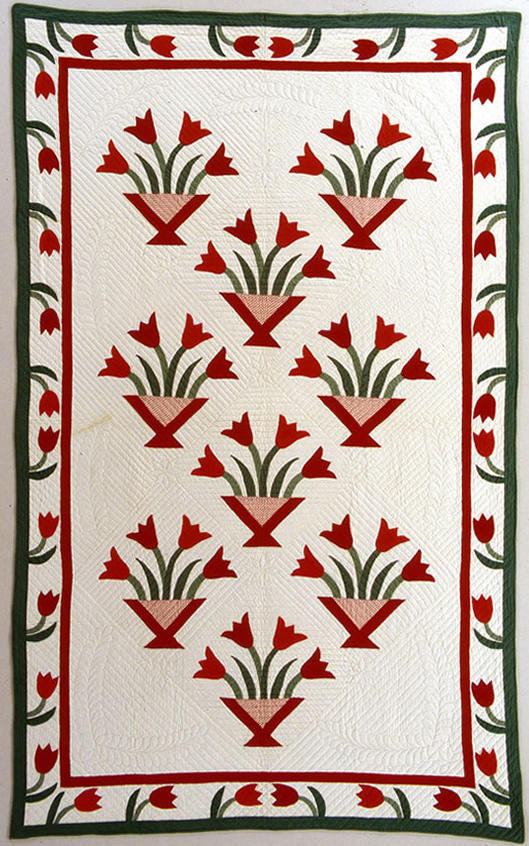 This Tulip Basket quilt was likely made at the Tuley Park Quilt Club using the Alice Beyer Quilting manual published by the Chicago Park District. Neither the Beyer manual, nor the published versions of the Nancy Cabot 'Tulip Basket' pattern offer border suggestions, but the Beyer manual, devoted a 7-page section to a discussion of the importance of quilt borders and offered several illustrated suggestions for designing them. It is not known how Gasperik came up with her elaborate border design for this quilt. Many of her early quilts had "Century of Progress 1933" embroidered on the back. This Double Feather Star quilt was displayed at the October 10, 1936 Tuley Park Quilt show (see picture below). This quilt exemplifies how Mary Gasperik designed her quilt using a photo of an antique quilt. In this case, she used a b/w photo in Marie Webster's book Quilts: Their Story and How to Make Them. Since only a quarter of the quilt was visible in the photo, Gasperik had to devise her own pattern for the full quilt. This Laurel Leaf quilt was displayed at the October 10, 1936 Tuley Park Quilt show (see pictures below). In 1934-1935, the Nancy Page "Laurel Wreath" series appeared in newspapers nationwide, including in Chicago and Detroit. Twelve of the 15 wreath blocks use Nancy Page flower and bird patterns. Gasperik elaborated on the Page bird patterns, incorporating a wider variety of fabrics and shapes than the commercial pattern specified. The 15 blocks which do not have the iconic Page wreath use floral patterns from outside sources. Three are from Nancy Cabot/Chicago Tribune. One is from the Priscilla Patchwork Book, and Gasperik adapted one from a quilting pattern from Home Art Studios. The remaining four bird and flower patterns are from as-yet-unidentified non-Page sources. This Wedding Quilt was displayed at the October 10, 1936 Tuley Park Quilt show. Made as a wedding gift for granddaughter Mary Bruland, she later donated to the Los Angeles County Museum of Art. This Four Little Pigs quilt was displayed at the October 1936 Tuley Park Quilt show (see picture below). Information on a typed 1937 exhibit tag records that her daughter Elsie designed the quilt and that Mary quilted it for her granddaughter. Susan Salser writes, "The addition of the fourth pig--a girl pig--was almost certainly dictated or contributed by Elsie to acknowledge or celebrate the possibility that this first grandchild might be a girl.

Star Arcturus was probably exhibited in at least one of the annual Tuley Park quilt shows between 1936 and 1949. We have an undated exhibit tag reading "Arcturus Star Quilt by Mrs. M. Gasperik". This quilt was made early in her career in 1934, and incorporates a Nancy Cabot (Chicago Tribune) pattern that honors the 1933 Century of Progress Exposition. Mary made two Blue Pinwheel quilts. At least one was exhibited at the November 11, 1938 Tuley Park Show. When quilts were displayed in the Tuley Park shows, they were accompanied by distinctive yellow object cards. Although, Tuley Park did not award ribbons, they did list prizes the quilts won at other shows. Clippings from the Detroit News and documents from the Illinois State Fair contests would list prizes and names of quiltmakers, but not the name of the quilt or pattern. The yellow cards saved by Mary Gasperik were helpful in identifying which Gasperik quilts belonged to the different prize ribbons in the family's colleciton. 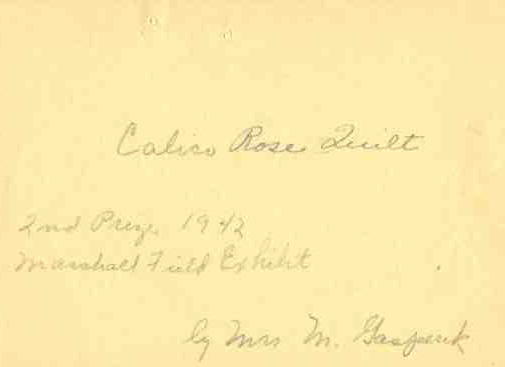 
Mary Gasperik contributed quilts to the Tuley Park quilt shows, which were hung in its large fieldhouse.  Here are some of Mary’s own photographs from this period (taken by Chicago Park District photographers and now part of the family’s Gasperik archive). Virgie Stewart, President of the Tuley Park quilt club sponsored by the Chicago Parks District, pointing to a sign reading “100th QUILT MADE BY TULEY PARK - Mrs. Barker”. Quilter Mary Gasperik is standing in the group, at the right, wearing a light striped dress. The woman seated in front of Mary Gasperik and facing the camera is thought to be Alice Beyer.  The photo is dated May 15, 1935.
Photo courtesy of the Chicago Park District, all rights reserved. Visitors and quilts at a spring Tuley Park quilt show. May 15, 1935.
Photo courtesy of the Chicago Park District, all rights reserved. A display of quilts at a Tuley Park quilt show.
Photo courtesy of the Chicago Park District, all rights reserved. 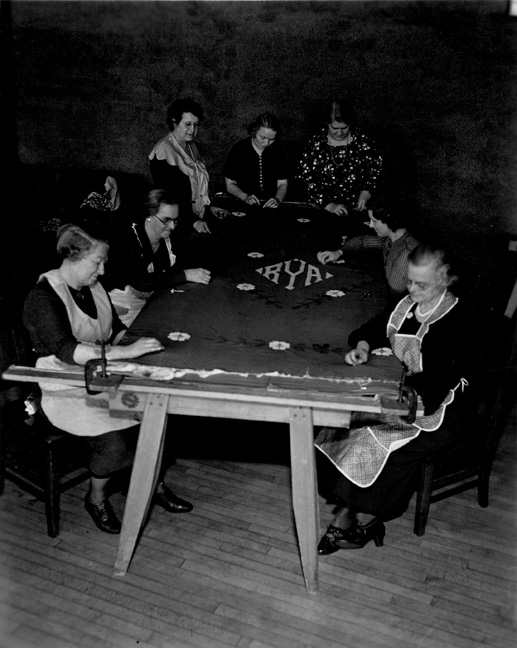 This photo shows Tuley Park quilters at work. Tuley Park Quilt Club Club president Virgie Stewart is shown at the back right, wearing a flowered dress. The names of the other quilters are not known.
Photo courtesy of the Chicago Park District, all rights reserved. An unidentified member of the Tuley Park quilt club.
Photo courtesy of the Chicago Park District, all rights reserved. 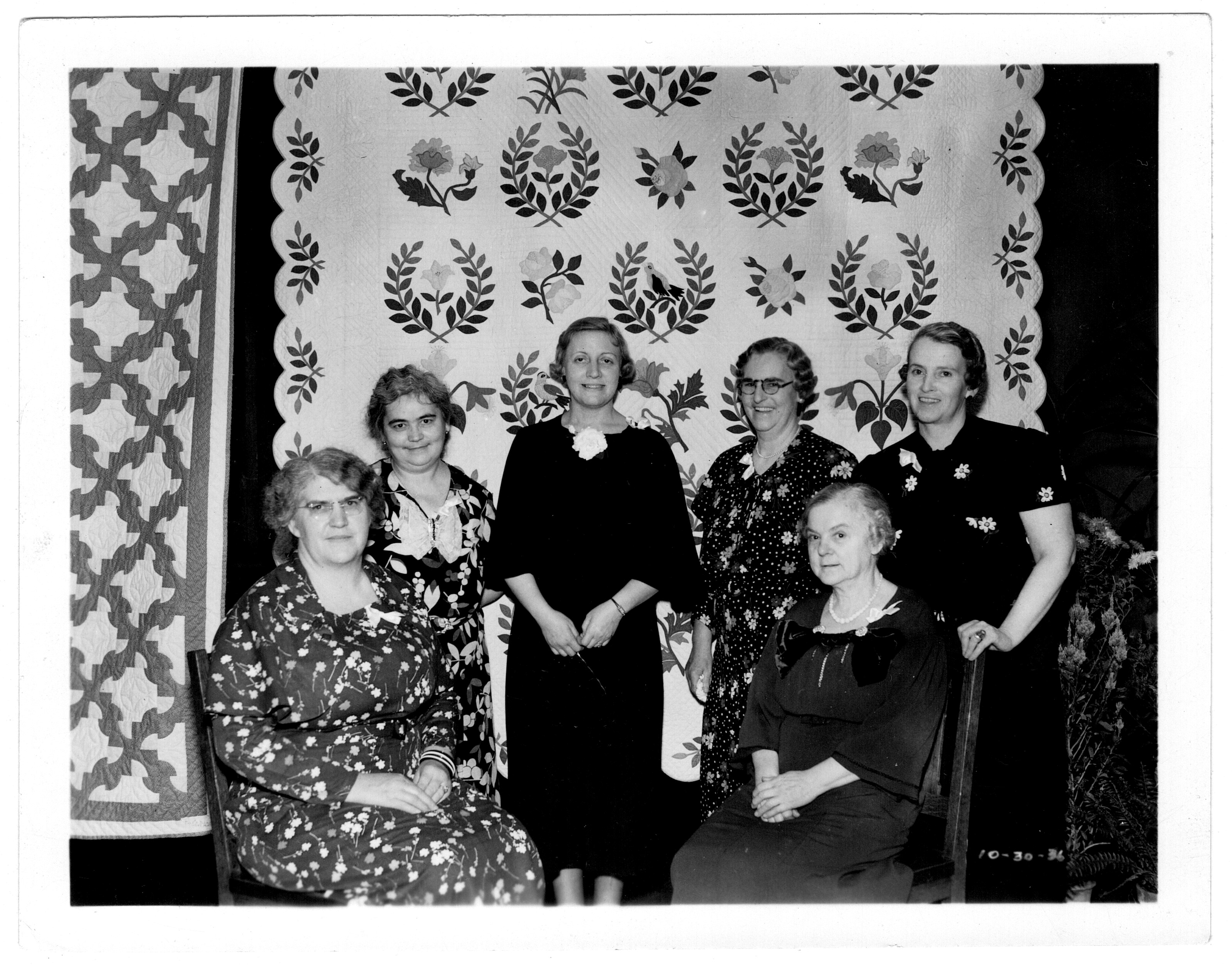 Members of Tuley Park quilt club standing in front of Laurel Wreath quilt made by Mary Gasperik.  Seated at left is quilt club president Virgie Stewart.  Standing at left, just behind Stewart is the quilt’s maker, Mary Gasperik. Other members of the group are unidentified. The photo is dated October 30, 1936.
Photo courtesy of the Chicago Park District, all rights reserved. The four quilts made by Mary Gasperik displayed at the October 30, 1936 Tuley Park quilt show are (left to right):  Bridal Bouquet (dated 1933 on the front and 1936 on the back, a quilt now in the collection of there Los Angeles County Museum of Art),  Laurel Wreath (dated 1935), Four Little Pigs (undated), and Double Feather Star (dated 1935).
Photo courtesy of the Chicago Park District, all rights reserved. 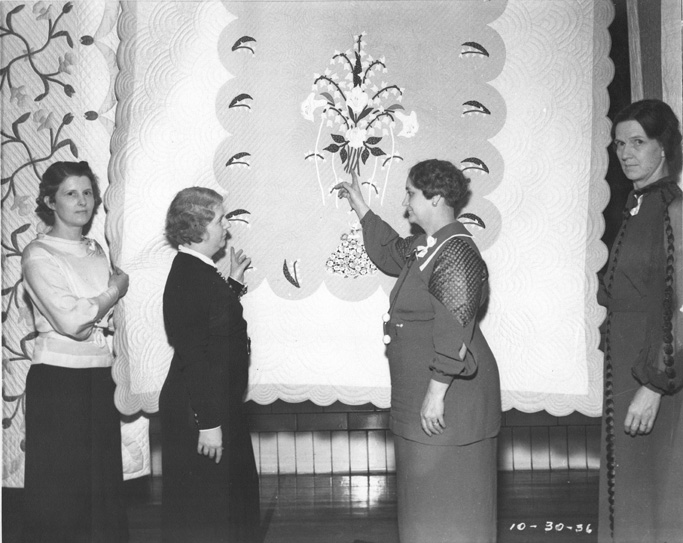 Tuley Park quilt club President Virgie Stewart pointing to the center of  the Bridal Bouquet quilt made by club member Mary Gasperik.  This quilt is dated 1933 on the front and 1936 on the back.  This quilt is now in the collection of The Los Angeles County Museum of Art. The identities of the other three women in this photograph is not known. The photos was taken on October 30, 1936.
Photo courtesy of the Chicago Park District, all rights reserved.

In February, 1949 Gasperik participated in her last Tuley Park quilt show. Mary's daughter-in-law, Doris (Mrs. Elmer) Gasperik was one of the organizers and the show was sponsored by the Woodfield Women’s Club. Doris was a great supporter of Mary and was crucially helpful in encouraging her mother-in-law to exhibit quilts after Stephen's death. It is unknown if the Tuley Park Quilt Club was part of this exhibit. Stephen and Mary had left Cottage Grove the year before and moved to East Hazelcrest. Mary did not drive making it likely that her membership in the Tuley Park Quilt Club ended. She was 61 and still actively quilting. This family photo was taken in East Hazelcrest. Daughter-in-law Doris stands in front of her daughter Kathy, next to Mary and Stephen. Stephen died in 1962, not long after this picture was taken. This announcement for the quilt exhibit includes other Woodfield Women's Club news.

An announcement in a Chicagoland paper about the 1949 Tuley Park quilt exhibit. featuring Mary Gasperik's quilts.

These are two of the quilts that were displayed at the 1949 Tuley Park show. 
In 2008 Merikay Waldvogel took photos of Tuley Park during a Gasperik research trip to Chicago. The sign at Tuley Park, 2008
Photo by Merikay Waldvogel The community building at Tuley Park, 2008
Photo by Merikay Waldvogel