Mary Atkins is featured in the exhibit: Quilting Sisters: African-American Quiltmaking in Michigan. 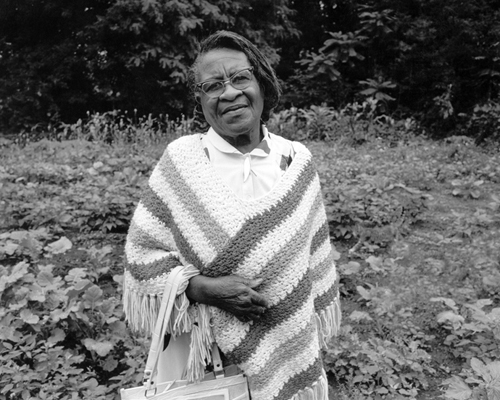 Atkins grew up in rural Arkansas and was about eight years old when she learned to quilt from her mother who made quilts for family use. According to Atkins, her mother taught her and her sisters to quilt in order to keep them out of mischief after they had finished school or after doing their chores on the family farm. "There was no playing after work, but I'd sit down on a stool and begin piecing."

Where did the quiltmaker grow up?

Farmer, raised children, made quilts for family use.

Under 10 years of age

Mother, to keep Mary and other daughters out of mischief all were given quilt blocks to sew after they had done their share of work in the garden and on the farm in Arkansas.

Mary Atkins grew up in rural Arkansas, and learned to quilt from her mother. There was "...no playing after work, but I'd sit down on a stool and begin to piecing." Mrs Atkins uses only scraps for her quilts, and does her quilting on a table. Sometimes ideas for quilt designs come from watching television--" ...there was a man on T.V. talking about waterbeds. I knew I didn't want any waterbed. I was looking at the quilt." Mary has been married two times. After her first husband died, she married Mr. Atkins, she moved into his house which I think is her present house. On his couch were many quilts in very bad condition made by his first wife. All had been wet, stored damp and were beyond saving. Mary liked one pattern and copied it for one of her quilts (pattern name she doesn't remember and it may have been an original pattern of the first wife). All first wife's quilts were thrown out and Mary doesn't remember which or where her quilt copied from that pattern is now.