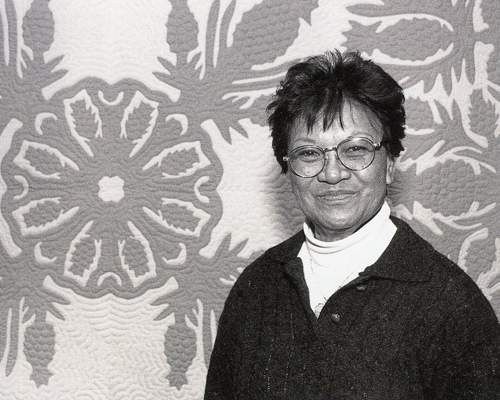 My mother was an amazing person, and had a remarkable life. She spent her life caring for her family and teaching Hawaiian traditions to both kamaina(s) and malihini(s). She loved her parents and particularly admired her father Ah Sing. He was a in some respects a renaissance man as were many others who worked on the Parker Ranch. He spoke fluently in English, Hawaiian, and several dialects of Chinese; he was a skilled horseman; a nana aina for the Parker Ranch; later worked as a pipefitter at the MCAS in Kaneohe. He stressed education for his children a message that was passed on through Harriet to her children; and resulted in six grandchildren with college degrees. It was Ah Sing that crafted Harriet’s quilting frame; and that quilting frame became her avenue for expression of her Hawaiian culture. Discovering her father’s smarts and creativity in her own venue, she created her art one small stitch at a time. Her mother’s quilt patterns were imbued with the subtle nuances of Hawaiian culture; with names that would describe not just the subject, but even the feeling that the final quilt would portray. This is what Harriet translated in quilting to bring happiness to her and others. I loved my mother; celebrate her life, and will truly miss her. Harriet was born and raised in Waimea, where her father worked on the Parker Ranch. Besides what the ranch provided their family; a garden and hunting opportunities kept the family fed and provided goods for bartering. She attended seminary in Kohala as did her sisters, and moved to Honolulu where she met my father Edward Soong. While in seminary, Pearl Harbor was bombed and the student in the next room had a radio (which was forbidden at the time); and they listened to the news secretly. When it was announced in an assembly at the seminary, there were at least two students who already knew. Harriet and Eddie met in Honolulu, fell in love, and married in 1946. In 1947 I was born, followed by Dan in 1954, then Kirsty in 1955. Our parents moved to Kailua where we would grow up and eventually all attend Kamehameha Schools. Harriet worked at Schools for 25 years in the accounting department. Mom quilted as long I can remember. While I can’t remember every home we lived in, the quilting frame was a constant piece of furniture. A few of those quilts have hung in museums across the nation, Hawaii, and Canada, as part of the Smithsonian’s Traveling Exhibit, To Honor and Comfort. Those quilts now remain with the Smithsonian as a virtual record. When our parents retired to Kona, Harriet felt that her circle was complete and that phase of their lives became an endless source of joy, discovery, travel, and creativity. Dad finally had the garden spot he desired and mom’s quilting skills became extraordinary in quality and quantity. When my parents and I drove from Las Vegas to Boulder, CO for Sarah’s wedding, she was elated that God had chose her to teach and pass on her skills to so many willing students in Kona. She later expanded her craft to lauhala weaving and established workshops, and attended the “Carrier’s of Culture” event at the Smithsonian in Washington D.C. honoring Native American crafts.

Lived her Life
Harriet lived an active life. As one of her children I remember a working parent, choir member, someone sewing our clothes. When Kirsty went to pickup our mother’s belongings in Haleiwa, there were several kihei that were in works in progress. We laughed about how all of the patches represented scraps from clothes that she had made for us. Harriet loved sports. She followed her teams, knew personal facts about her favorite players, and loved rubbing it in if your team loss; especially to one of her teams. When my cousins and I played little league she was one of the team’s “cake makers” a position of high status among us kids; more important than winning the game. She would discuss sports with anyone. One of her clients (for quilts) was a professor at Stanford University. He visited and called her frequently to inquire about his quilt and they discussed sports. One day he was extra excited when he called as he had played basketball the day before with Chris Mullin (NBA Hall of Fame). She asked me who is Chris Mullin – fortunately he was on ESPN that day as a commentator; so she made a note so she could respond to her client. Harriet participated in whatever was going on wherever she was. When she visited the mainland she wanted to pick fruit, make jam, go to Utah, take truck rides in the snow and of course enjoy the casinos.

The person
Harriet was proud of her Hawaiian heritage, her upbringing, and spoke often to me about her father, he smarts, skills and how she wanted to be skilled also. Witness her prolific accomplishments including the very clothes we wore as children, we know she attained this goal. At one time Andy needed to do a project for a Hawaiian class at school. Nana provided the project and materials along with instructions for completion. Sometime in the conversation it became apparent to Nana that her instructions were not going to be precisely followed and she withdrew her project because it was not the “right way” to do it. She took pride in anything with her name attached to it and always carried through in the “right way”. Harriet was patient. Quilting is a process requiring patience and perseverance. She was also patient as a mother. I remember a morning we were leaving for school and being my usual slow self I had gotten in the car, but had not shut the door before she started to back out of the carport. The open door hit a post and bent it so it would not close. She tied to door closed with rope and we were off to school. As mad as she must have been we continued on as if nothing had happened. If any of her co-workers are in attendance, I’m sure you might remember this day for she probably had something to say after she got to work. Harriet was a loving person; never more evident than her devotion to her grandchildren. Recognizing how her parents and Eddie’s parents had played a role in our lives she always had time and wanted to visit or host her grandkids. My daughter Sarah feels blessed to have spent time with her grandparents. “They weren’t just there for the important milestones like birthdays and graduations she remembers; but also for ordinary times whether just preparing a meal, sewing, go holoholo, or just to talk story and laugh.” When Abbie (great granddaughter) visited Kona, she loved picking flowers with Nana, eating shave ice and going to the ocean.

Liked to spend time
Harriet had another whole experience when she started to sew after retirement. She started to show and help others to learn the skills she had developed through years of trial and error, experimenting, and using her intellect to hone her craft. Through collaborations with universities and national foundations she brought Hawaiian crafts to the attention of others. I remember her telling me that she felt she had been chosen for this task and did not take it lightly. Her expression of her mother’s patterns, the story of the pattern that becomes the quilt, and the beauty of the final object testify to the fact that she achieved what she set out to do. Harriet loved different foods and loved eating. She was not a cook and often remarked to me why should I cook, Dad is such a good cook I can just eat. She loved eating almost everything, but lived for fish and poi. When I was young, she would drop me off at the beach in the morning and pick me up in the evening. It did not matter what I caught, how big or small, she was always ready to prepare and eat those fish. If it needed to be eaten raw or cooked, she would prepare it and we would eat it. When I came to Kona, I took her to the Ultimate Burger joint. As we dug into hamburgers with avocado, grilled Maui onion, and fresh made fries, she remarked “I would never have even thought to eat this kind of food”, but before I left she wanted to go back and try it again. Harriet loved the lights, casino games, 24 hr. atmosphere, and meeting people from all around the country when she came to Las Vegas. She would meet people from Iowa, and then meet them again a couple of years later and they would talk about their families and their casino winnings.

Accomplishment
Harriet was not someone who accepted praise easily. She learned to humble early on, and that praise was best left for those who “talked” more and accomplished less. Her quilts are in the collections of Smithsonian and the Michigan State University Museum. She served as a Board Member with Kona Outdoor Circle, Ka Ulu Lauhala, and Ka Hui Kapa Apana O Waimea. But to her, the greatest accomplishment was the opportunity to share with others the skills she had developed, and see others quilt or weave something on their own. Sarah relates “She loved to share the beauty of the Hawaiian culture. You could see it when she taught a class or did a demonstration. You could hear it when she spoke to us in Hawaiian, or told stories about her childhood. She had so much to share and appreciate about her life that I am proud to be part of that beautiful heritage that I will pass on to my daughter; aloha au laoe, a hui hou.”

Closing
In closing my brother and sister and I extend our heartfelt sympathy to Harriet’s extended Ohana in Honolulu, and on the Mainland, and to the wonderful friends she enjoyed during her years in Kona. I know she is at peace now. She spent 9 years alone after my father passed, and those were lonely years for her, but the loneliness is over and she has joined those who preceded her in heaven. Thank you for taking the time to attend my mother’s services. Your love and friendship over the years meant so much, to her and her beauty will be carried forth in her children’s children and her beautiful Hawaiian crafts My mother was a person who knew the Bible, when I was helping her get her home ready for sale, I could not help but notice that her calendar was not only filled with appointments, but scattered with Bible verses. I would like to close with a prayer paraphrased from the 90th chapter of the book of Psalms;

Lord, you have been our dwelling place throughout all generations. Before the mountains were born or you brought forth the earth and the world; from everlasting to everlasting you are God.

You turn people back to dust. You sweep people away in the sleep of death;
They are like new grass in the morning but by evening it is dry and withered.

Teach us to number our days that we may gain a heart of wisdom.

May the favor of the Lord our God rest upon us." Amen

- written by Carlton “Carl” Soong, and delivered at his mother’s memorial service, held at the Chapel at Kamehameha Schools, Honololu, Hawaii.

He was a skilled horseman; a nana aina for the Parker Ranch; later worked as a pipefitter at the MCAS in Kaneohe.