Claire Vlasin was passionate about quilts: creating, collecting, studying and judging them. This Quilt Legacy Project shows her collection of quilts, both those she made and those she purchased and preserved for posterity. 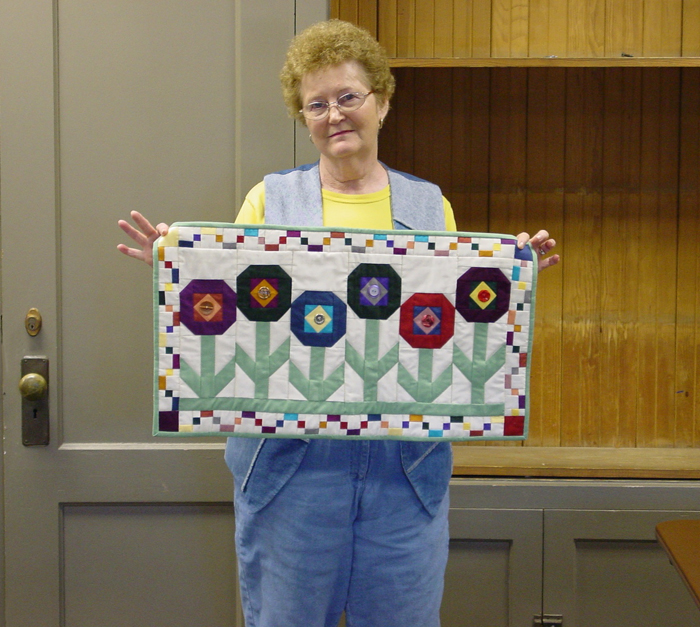 Claire Vlasin holds one of her minature quilts.

Helen Claire Pritchard was born in Spalding, Nebraska, in April 1932, to second generation Americans.  She and her five siblings helped their parents run the family farm until they assumed careers of their own.  As a large Irish/English family in a small town (fewer than 1000 residents), they celebrated weddings and commemorated the passing of friends with the entire town.

Claire was a cheerleader, avid pianist, waitress, and seamstress in high school.  When her father asked her to give up her dream to become a concert pianist for a more stable career, she chose nursing, and moved to Omaha, and later to Lincoln, Nebraska, for education and training.

As a graduate of the St. Elizabeth Hospital School of Nursing in Lincoln, Claire excelled in nursing skills and was known for her empathy with patients.  While working at the hospital she met her future husband, Ray Vlasin, through her elder brother.

When Ray finished his duty in the Korean War, they married in July 1955, on a record-breaking hot day in Lincoln.  In the ensuing years, because of Ray’s schooling and positions with the federal government and various universities, they made their home in several locations in the U.S.: Lincoln, Nebraska; Madison, Wisconsin; Annandale, Virginia; St. Paul, Minnesota; Green Bay, Wisconsin; and, finally, in 1971, East Lansing, Michigan.

Claire had been making her own hats, belts, handbags and clothing outfits in Lincoln, and once she had children, taught those who were interested how to sew.  She helped her children with 4-H projects, prom dresses, alterations, and new outfits.

She took quilting classes and was soon making quilted wall hangings, bureau runners, baby blankets, Christmas skirts, and full-sized quilts.  After three of the children had left home, Claire entered her traditional and more modern quilts in shows where her work received awards and recognition.

Claire created her first full-sized quilt in the early 1980s.  She relished creating the quilt top and developed great respect for those who assisted with the “hand and machine quilting”.  She developed friendships with these talented individuals in East Lansing and the Lansing metropolitan region, including John Putnam, Mary Dunn, Cindy Mielock, Katie Borntrager, Nancy Boyce, Kate Edgar, Kathy Thomas, Victoria Teems, Susan Myers, Georgiana Viele, and Ruth Bratzel.  They collectively expressed the view that “Claire did beautiful, precise work and she was fun to work with.” 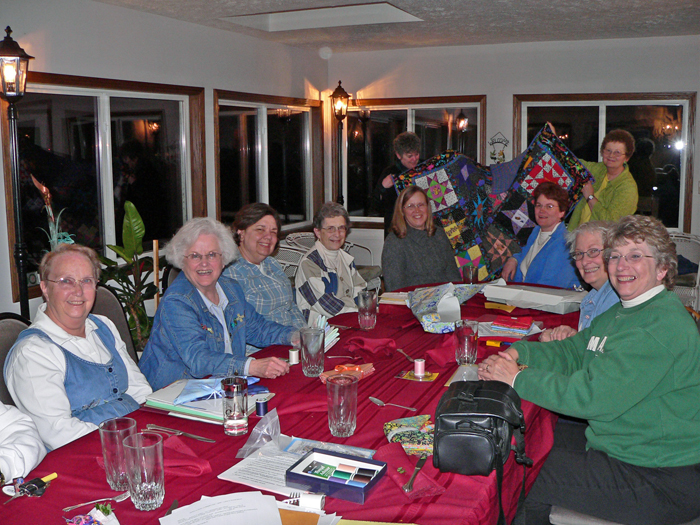 
Claire initially used Pfaff, White, and Singer sewing machines and then graduated to using the more advanced Viking and Bernina machines and a surger.  Her studio also included three work tables, numerous templates and rulers, color wheels, a copy machine, and an excellent library of quilt books, designs, patterns, and fabrics.  She enjoyed working on multiple projects at a time and in the company of her quilting friends. If asked, she helped them with designs for or repair of their projects.

She loved fabrics for their color, pattern and texture and enjoyed sharing some of her approximately 5,000 traditional and modern fabrics, from fat quarters to yards and bolts.  She could be found in her “office” at least 40 hours per week when not travelling.

Claire also acquired an extensive collection of books and patterns from her visits to quilt conferences, shows, and quilt and antique shops.  She didn’t have a favorite quilt shop but believed in supporting whatever shop she visited in some way, usually by purchasing material.  Her love of creating and designing seemed to track with her earlier interest of doing the same with hats, belts, handbags, and clothing outfits.  As she traveled, she also collected beaded purses and fashion pins for the same love of texture, pattern, color, and design.

The creative design of the quilt interested Claire the most. After the early 1990s, she rarely quilted her own creations, but continued to study artists and patterns, and created quilt tops.  As John Putnam observed, “Claire had a fondness for very traditional patterns but certainly enjoyed trying and mastering new techniques and styles.  In addition to creating her own works of art, she also collected very fine vintage quilts.  She was very proud of the system that she and her husband developed to store the collection in an environmentally controlled manner.”

Visiting children, taking vacations, and attending quilt-related events took her throughout the United States. As mentioned above, eventually she became a collector of quilts which told stories – of our nation’s history (such as the Civil War), a particular quilting technique (such as applique or prairie points), certain materials (such as flour sacks), techniques (such as paper piecing), or pattern designs (such as Log Cabin) of a period. Claire Vlasin sharing her quilt during Show and Tell at the Capitol City Quilt Guild.
Photo by John Putnam

Claire exhibited many of her finished quilts in shows sponsored by the Capital City Quilt Guild for a number of years. A good number of them received awards. Claire also exhibited at the Michigan Historical Museum for several years. Occasionally, Claire gave “show and tell” talks about a small portion of the quilts she created and those she collected. Sometimes these talks were offered to friends of her church and other times they were structured as a fundraiser for the local Habitat for Humanity affiliate. 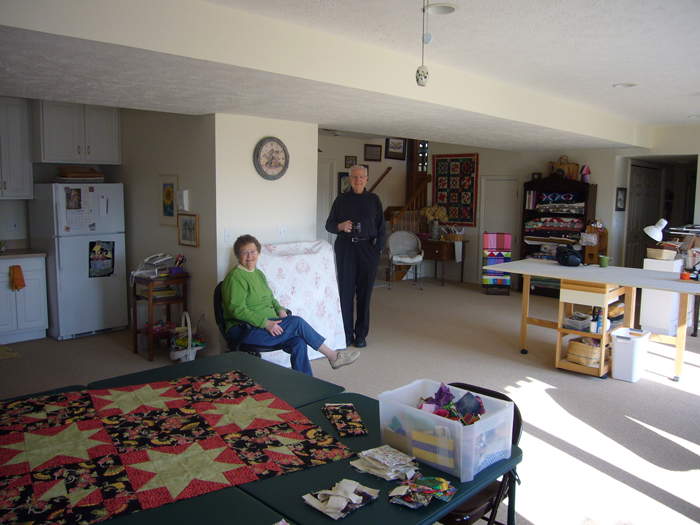 Claire and Ray Vlasin in her quilt studio.
Photo by John Putnam

Claire and Ray eventually designed and built a new home in East Lansing, Michigan, to accommodate her collection.  Her studio had morning light and afternoon shade, and next to it was a room for quilt storage.  The storage room was temperature- and humidity-controlled, removed from pipes and ground water, and used color-protective lighting.  Within that room Ray designed and constructed a storage cabinet, which he patterned after those used at the Michigan State University (MSU) Museum. The cabinet accommodates 60 full-sized quilts on smooth-rolling drawers. He and his son-in-law also designed wall racks and storage shelves.  Claire used archival tubes, acid-free storage boxes, and acid-free wrappings to preserve the quilts.  According to experienced quilters who toured the room, it was comparable to the preservation techniques used by the best quilt museums they had visited. 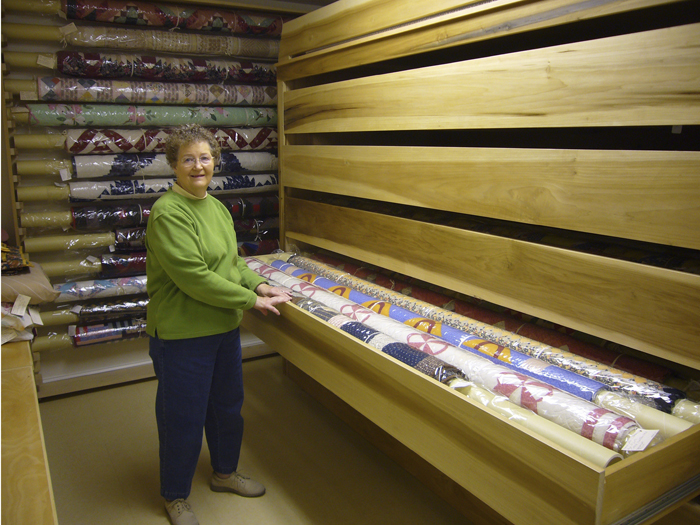 As a result of her largesse for three decades, Claire’s quilts are scattered throughout the United States. This site catalogues some, but not all, of those donated quilts and their locations.

Bonnie Hunter, a respected quilter and writer of things quilt related, toured Claire’s studio in early November 2012 and reported on her visit in her Quiltville's Quips & Snips!! blog.

Claire passed from this life in late November 2012 at 80 years of age, still working at the craft she loved so well, with a collection of 81 vintage and dozens of her own finished quilts. She also gifted more than 100 quilts to friends and relatives of all ages.  Many baby quilts were commissioned by Claire’s daughters to gift to their friends. Those baby quilts are treasured by the now-grown children who may or may not have ever met her.

Her close friends in the quilting community gave her a high honor in making suggestions for her funeral including the display of her beautiful “Stained Glass Window” quilt.  They served as honorary pallbearers, wearing the white gloves she always had at the ready.  A sample of her quilts was displayed in the funeral home and at the service at St. Thomas Aquinas Church, where she and Ray were active parishioners. 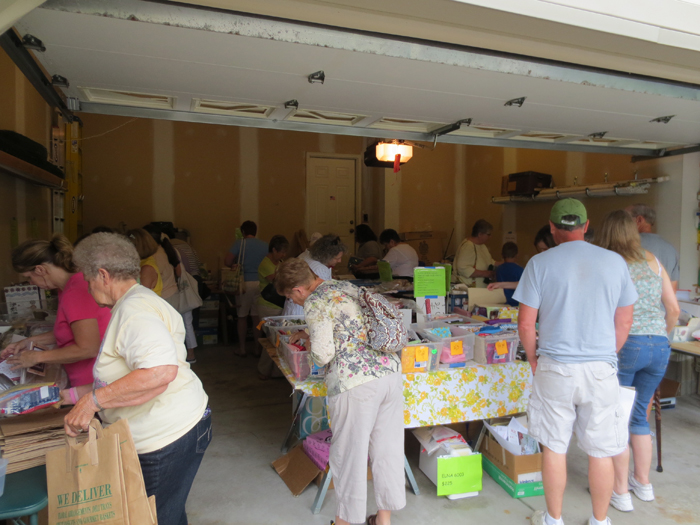 Some of these same quilting friends didn’t hesitate when called upon to help organize Claire’s materials and equipment for sale, the proceeds of which formed the basis of the Quilt Preservation Fund. This Fund supports preservation of Claire’s quilts which will be donated to various museums, all of which are known for their quilt collections. Additionally, friends, family and relatives contributed to the Quilt Preservation Fund. Claire would have appreciated these touching activities; she prized her quilting friendships with others in the Cotton Patchers, the Capital City Quilt Guild, American Quilt Study Group, Michigan Quilt Network, and other associations and groups.

How to pay honor to and preserve Claire’s rich legacy of making, giving, collecting, and studying quilts? Ray met with Beth Donaldson and Marsha MacDowell of the MSU Museum and the Quilt Index, and the idea of a digital Legacy project was hatched.  Ray generously provided the funds to allow MSU Museum staff to work with the family and friends to document all of Claire’s quilts and then to develop the Claire Vlasin Quilt Legacy Project as the first Legacy Project in the Quilt Index.  Ray also established the Claire P. Vlasin Endowment at the MSU Museum to support research, education and the display of Claire’s quilts at the MSU Museum.

Ray owes a debt of gratitude to the quilting community for their tutelage regarding Claire’s collection, for their willingness to review and document their recollections of Claire and her work, and for their active support. All these things made the information on this site possible. Claire’s family is grateful for the opportunity to share Claire's legacy of joyful quilting friendships and her remarkable quilting achievements.

Claire's friend John Putnam interviewed her for a program for the Capitol City Quilt Guild. Click to listen to Part 1