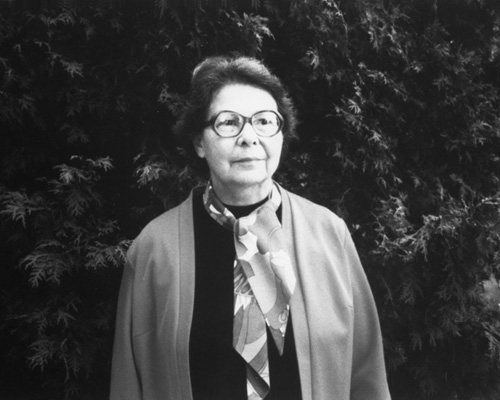 Although my grandmother made quite a few quilts, and my mother quilted some, this quilter, myself, did not really become interested in quilting until about 1965. That was when I finally finished piecing a Star of Bethlehem, which I had started in 1939, put it in my grandmothers frame and quilted it. After that was done I started making patchwork items to sell, such as pillows, crib quilts, and wallhangings. I discovered I loved designing and working with color and I liked the idea of creating beautiful things that would last long after I am gone.

During the late 60s I bought several good pieced tops at auction sales and have quilted and sold four of those. I have made a quilt for each of my two daughters and am now starting to make a quilt for my six grandchildren. I also have two tops pieces and ready to quilt for myself, a Boston Commons and a scrap quilt of my own design which I call Points to Ponder.

Two of Carolyn's quilts are featured in Michigan Quilts: 150 Years of a Textile Tradition, page 50.
The main differences are the loft of the batting, and the size. A comforter is always tied because of its thickness.
I have heard of and seen examples of all these mentioned. My personal experience has been with a friendship quilt. In 1932 one was made for my mother by neighbors when she moved to another state with her family. It was a Log Cabin, cotton fabric, with the name of whoever sewed the block embroidered on the larger-than-usual chimney patch. The quilt was inherited by a sister after our mother's death. I subsequently obtained the quilt (by trading for it with one of mine) with the purpose of giving it to the MSU Museum, Folk Art Division. I wanted the quilt to be preserved for future generations to see and study as it is full of history in the area which it was made.

Many areas of Food Service until retired in 1985

Self taught, by osmosis, I guess, from maternal grandmother and mother. First quilt was a double bed size quilt. Started at age 19, then stopped and began again at age 45, and continued.

To neighbors and at craft/art shows. In this area if I charged what a quilt is worth, I would not sell any so my price fluctuates between $250 and $350.