Bozena Wilhelmenia Clarke was a prolific quiltmaker and member of the Detroit News Quilt Club Corner. Her daughter Laura May Clarke was also a quiltmaker. 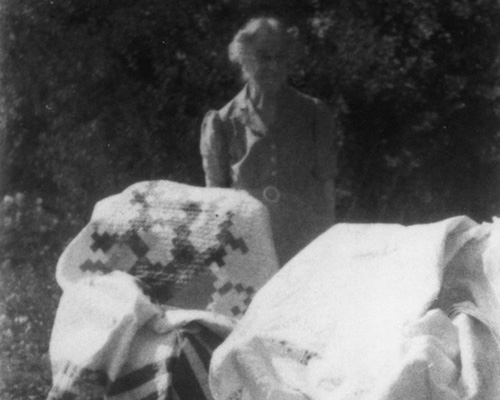 Bozena made quilts for many family members for special occassions and for gifts for birthdays, weddings, graduations, etc. Fabrics came from leftovers from sewing clothing and bags of scraps were bought from a store on Michigan Avenue. Fabric yardage was also purchased for backs and piecing when needed. Scraps not suitable for quilting were used to make rugs. Bozena Clarke's old frame was set up in the attic. Quilts were quilted there in the spring, when it wasn't too hot or too cold for the space. One spring Harriet remembers her mother and her grandmother Arnold set up the frame in the dining room and quilted during a visit from her grandmother.

Formal, probably to 8th grade, but she continued to read and educate herself.

She worked for a tailor at the site of the former downtown Hudson's store, homemaker after marriage.

Housewife and mother. (Her father was Burgermeister of hometown in Bohemia.)

1896 was a clerk in Gas Appliance Store. Later converted gas lights to electric lights. Sold lamps. In later years he sold insurance and retired at age 80.

Probably learned quilting from the ladies at the church, but she was already a talented needleworker and tailor.

The Rebecca Jane Circle of the Boulevard Congregational Church, located at the corner of Warren and West Grand Boulevard, Detroit, Michigan

This group sewed together to make items for church bazaars. They sold "heaps of Aprons" according to Harriet Clarke, Bozena's granddaughter. The sold finished quilts for $25-$30. The also quilted tops for others. They quilted once a week and had a potluck lunch.

Only at the church bazaar.