Philomena Durcan introduced Celtic design to the quilting world in 1980 with the publication of her first book, Celtic Quilt Designs. The Interlace patterns were inspired from her Irish heritage and especially the ancient Book of Kells.

Philomena was reared in County Sligo, Ireland, where she was greatly influenced by her mother, an expert lace maker and family seamstress. Her father, a teacher, and her large loving family shaped Philomena’s generous spirit and joyful outlook in life. As the youngest of seven children Philomena was allowed the freedom to pursue her own interests. She completed a course of study in institutional catering at the Dublin Institute of Technology Schools: The School of Culinary Arts and Food Technology and managed the food services of a hospital in Dublin. She married an American, Walter J. Wiechec, a physicist and one of the founders of Core Memories Ltd., Dublin, Ireland. They moved to the United States and eventually settled down in Sunnyvale, California.

Philomena’s new American friends introduced her to the world of quilting with a request that she contribute a square to a friendship quilt. Since her heritage was unique to the group, she decided that an Irish design would best reflect her personality. She found a Celtic Friendship Ring to grace her first attempt at quilting. The enjoyable completion of that small piece lead her to take a quilting class where she reproduced the Friendship Ring design on her first large quilt (Irish Friendship Ring Quilt) She found that by using a running bias tape, she could execute the shape of the Celtic designs more accurately and easily.

While designing the Celtic spirals, Philomena and her group of quilting friends devised an easier method of making bias tapes using a steel bar for shaping the tapes. With the encouragement of her friends, Philomena began to produce these bias bars in different sizes and to make them available to the public. She sold the bias bars and her books under the Celtic Design Company. As a sign of their solidarity, her quilting friends made a signature quilt for Philomena, Shadow Friendship Quilt, which won a blue ribbon at the Santa Rose National Quilt Show in 1978.

Following the success of her first book, Celtic Quilt Designs, Philomena published three additional books of spiral and floral quilt patterns based on her bias applique technique. They are Celtic Spirals (1992), A Celtic Garden (1995) and Celtic Quilt Designs II: The Children of Lir (2003). Each book includes full size design patterns, instructions on making the bias tapes, on appliqueing and tips on color medleys. Philomena demonstrated that three ancient Celtic art forms (Interlace, Spiral, and Floral) can be beautifully adapted to the art of applique quilting.

With the overwhelming interest for her Celtic designs in combination with her innovative technique of bias applique, Philomena began to share her methods and tips in workshops, demonstrations and lectures throughout Europe, Asia, the Americas and Australia. 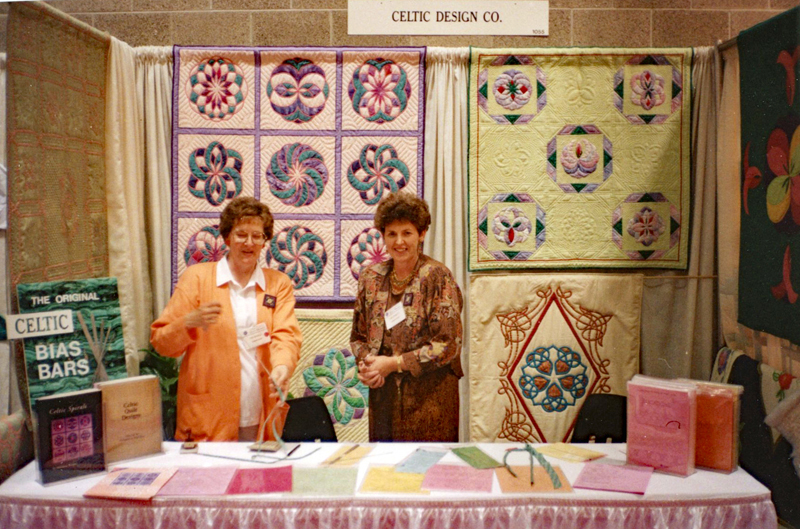 Her work has been exhibited internationally in numerous museums and quilt shows where she has garnered ribbons and attention. She has been featured in numerous quilting publications and magazines, among them Traditional Quiltworks and Traditional Quilter as Featured Teacher, Patchwork Quilt Tsushin (Japan), and Irish Quilting (Ireland). Her quilts have also been featured in quilting books, among them, Donna Kooler’s Encyclopedia of Quilting (2005) and Joea Wolfrom’s Patchwork Persuasion: Fascinating Quilts from Traditional Designs. In 2004 she participated in the video The World of Celtic Quilting. She has also been on Kaye Wood’s television show Quilting for the 90’s, and on Alex Anderson’s show Simply Quilts.

Philomena discovered that her Celtic designs were easily adaptable to stencils. She embarked on another avenue to share her Irish heritage by designing over a hundred stencils for quilting patterns, borders and whole cloth designs. Her stencils were sold under Stensource International, one of the largest art stencil companies in the United States. Through Stensource, her stencils have been distributed worldwide.

Celtic Interlace, which appears on the cover of her first and most popular book, Celtic Quilt Designs, was donated to the San Jose Museum of Quilts and Textiles in 2017 for their permanent collection. Philomena began quilting with friends who belonged to the “Sew N Sew” and “Studio 12” quilting groups. All of her designing and publishing was completed while living in Sunnyvale, California. She taught classes at the San Jose Museum for a few years as a volunteer. She wanted her first designed quilt returned to California to honor cherished memories of her days there as the “happiest time in my life” because of the pleasure of her creativity and the joy filled times with her lifelong friends. The Celtic Mini Interlace is a miniature version with many of the interlace designs appliqued and quilted. Celtic Clan Spirals , which appears on the cover of her second book, Celtic Spirals, was donated to the International Quilt Museum in Lincoln, Nebraska in 2017 for their permanent collection and for study and research. (IQSC Object #2017.020.0001). Durcan's drawings, patterns, stencils, files and photos are also archived at the International Quilt Museum. The spirals are derived from one master epicycle circle pattern. By varying the sections that are filled and/or colors, a multitude of patterns were developed. Nine exceptional designs are depicted on this quilt. Also included in this book is the quilt Sun Light which included five more epicycle designs with patterns repeated in the quilting. These patterns became so popular, that in 2003 Philomena produced a CD with embroidery designs based on the Celtic spirals. Each spiral design was given a legendary Irish name.

While visiting the gardens of Ireland and Scotland, Philomena became inspired by the “…carpets of flowers strewn with breathtaking abandon across the Celtic countryside.” From this vision rose A Celtic Garden, her third book dedicated to floral designs. With the included step by step instructions is a section on color selection and design. Through the Garden Gate features vibrant roses on a Celtic lattice quilted with one of her stencil border patterns. Based on the same pattern, Philomena designed a quilt for Fr. John Kerns 25th Ordination Anniversary. She included his chalice and the Celtic cross. Besides a pattern for roses, Philomena had included 12 other floral patterns. Tulips, irises, poppies, anemones and pansies were include on the quilt Through the Garden Wall. The versatility of her designs is reflected in Celtic Peony Rose where the meandering roses are echoed in the quilting in the opposing corners. Tulips seem to dance on a Tulip Holiday quilt completed in 2018 by machine quilting, integrating one of her tulip stencils to echo the appliqued tulips.

In her fourth book, Celtic Quilt Designs II, Philomena recalled one of her favorite childhood tales and designed a quilt reflecting the story of The Children of Lir. The characters: swans/children, king, stepmother, bells, cross; are illustrated in rich tones against the depth of the sea background. Included in this book are 28 more spirals divided between two sampler quilts, Celtic Sampler 2 and Celtic Sampler 3. Each spiral also has an Irish name.

Persian Treasure reflects another inspiration from her travels around the world. The bias applique technique and attention to details in the design created an elegant quilt. The pattern for this quilt was sold along with her books at quilt shows. It was awarded a “Best of Division” at a quilt show in San Diego.

Celtic Spendor was the creative consequence of a visit to the Oratory of the Sacred Heart, Dominican Convent in Dublin. Philomena marveled at the Celtic Illuminations by Sr. M Concepta Lynch O.P. using the “Lynch Method” taught to her by her father. Overwhelmed by the intricate interlace, spirals and borders, Philomena chose to simplify the designs while retaining the spirit of the chapel. The elaborate center medallion was a favorite pattern by skillful quilters. This quilt was chosen for display in the 1982 Tennessee World’s Fair. It appeared in remarkable detail in the 1985 Quilt Art Calendar from the American Quilter’s Society of Paducah, Kentucky.

Philomena retired her company in 2015 in Portland, Oregon. Her greatest joy is to know that her quilts and designs have brought pleasure to her family, friends and especially fellow quilters who have tried the bias applique technique and used it to enhance their personal quilting. It warms her heart to know that her Irish heritage in this unique concept of fabric art is embraced and enjoyed around the world.

Philomena Durcan died on July 28, 2020 in a care facility in Hillsboro, Oregon. She was 85 years old. During the pandemic, her family and friends had limited access to visit her. But, as usual, she was surrounded by a few of her favorite quilts.

Here is a gallery of quilts made from Philomena Durcan's books and patterns. 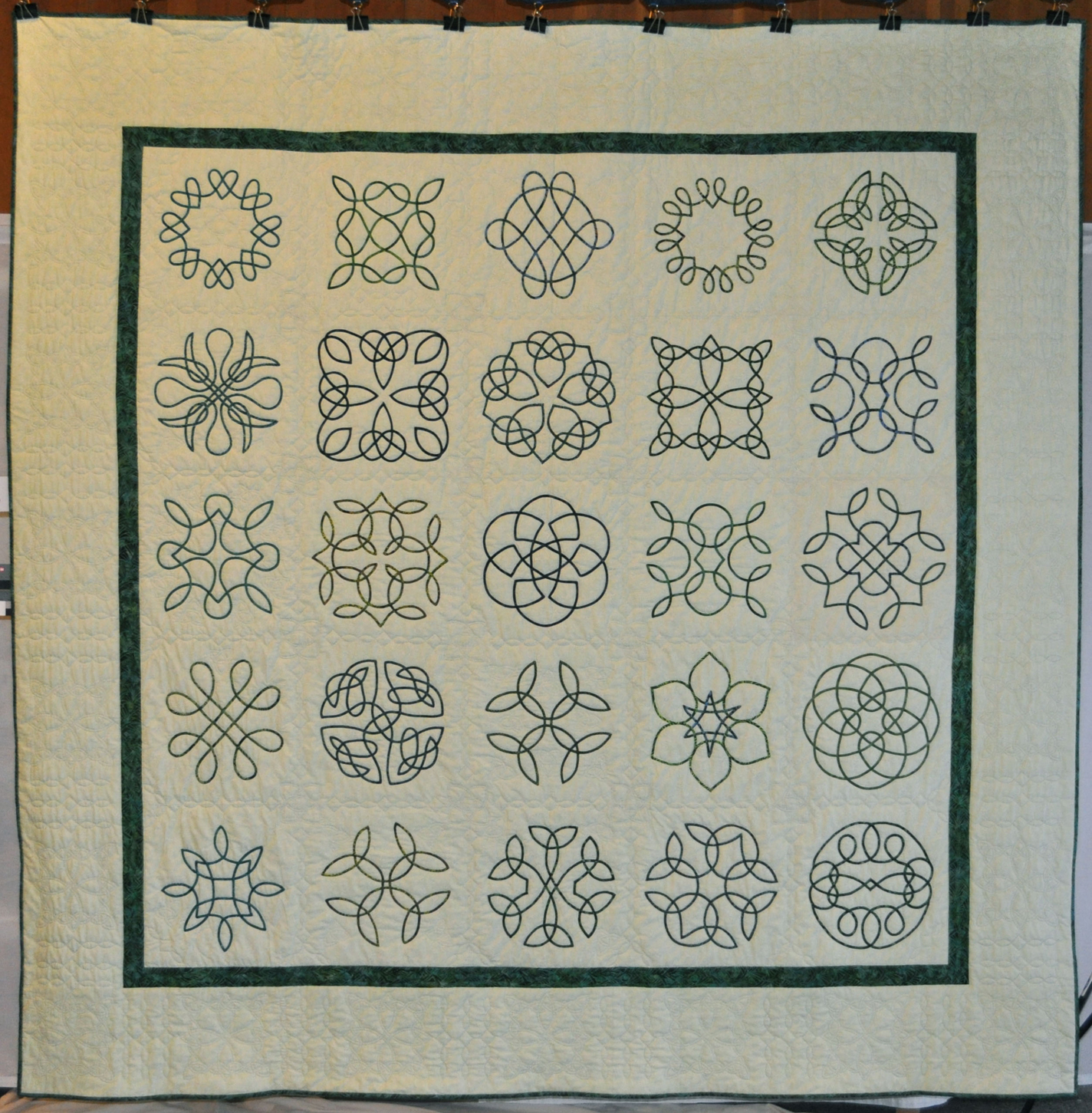 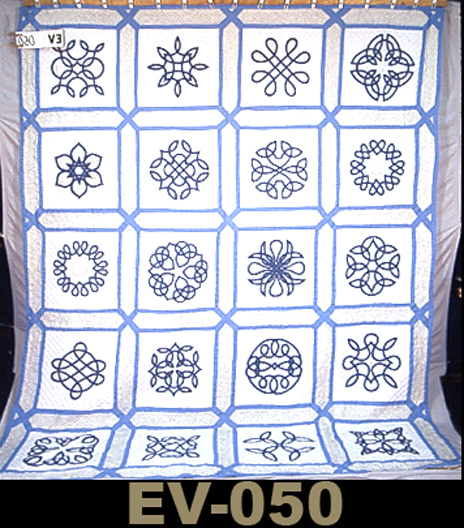 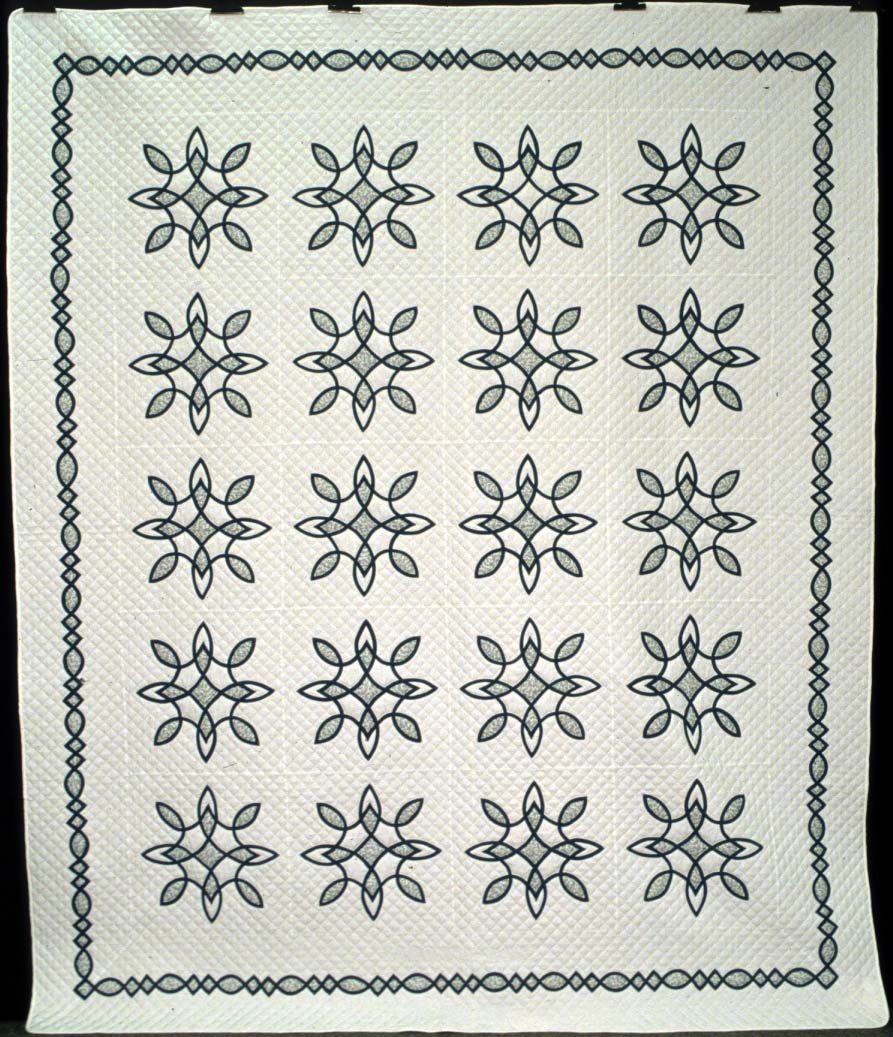 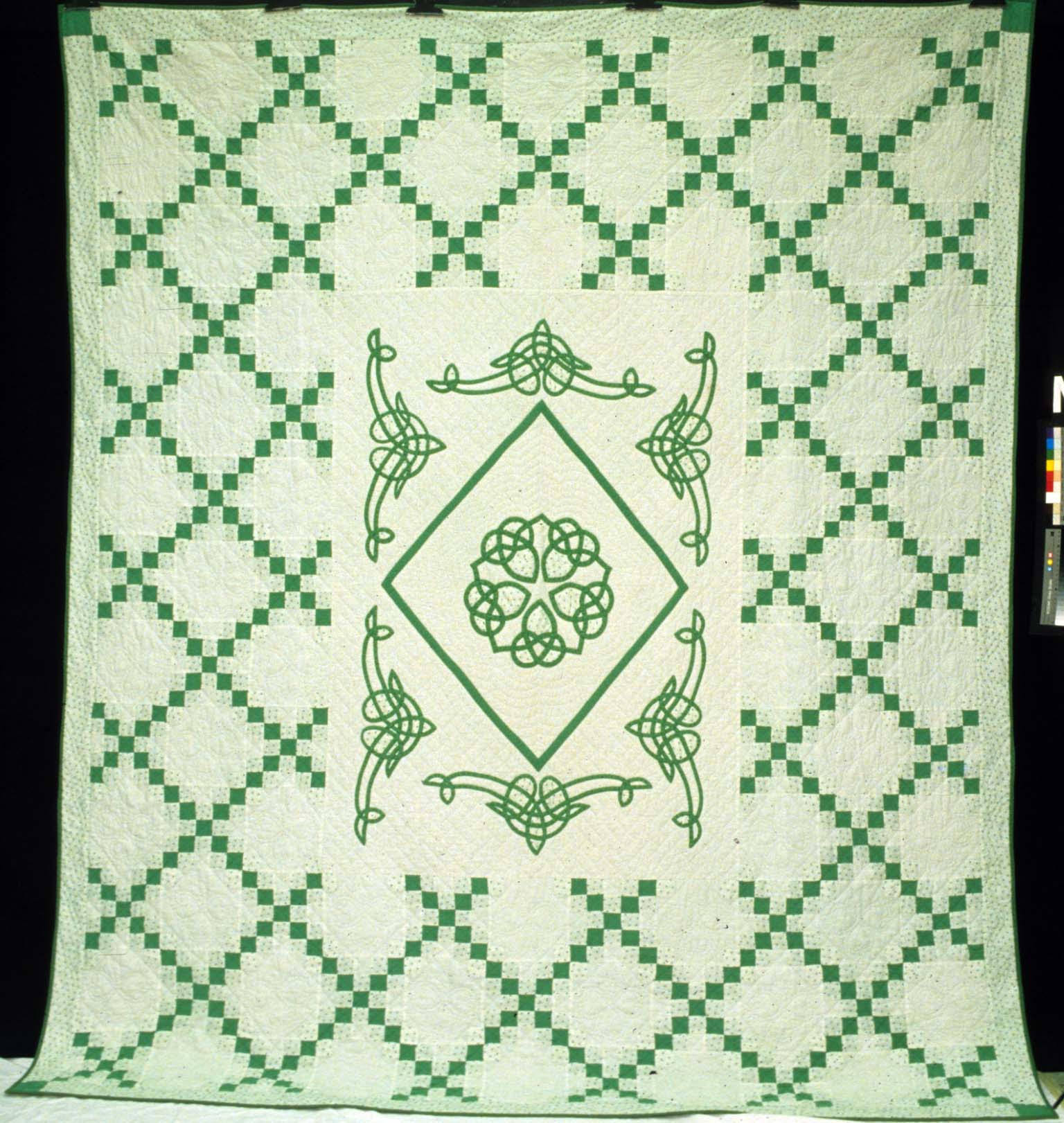 This quilt was made from patterns from Durcan's book, Celtic Medallion I. The last quilt was made from a pattern in the Persian Treasure book.

She taught her original Celtic quilting techniques all around the world.