Were "Drunkard's Path" quilts meant to have a connection to the Women's Christian Temperance Union? Do blue and white quilts outnumber red and white quilts because blue was the "official" color adopted by the W. C. T. U.?

Why are there so many more quilt block designs based on the letter T than any other letter of the alphabet? Were they meant to signify "T for Temperance?"

The answer to both questions is no, there is no known connection, either documented or suggestive. Nothing has yet been found that supports either theory in the volumes of contemporary material that historians, including myself, have combed through for 19th century and early 20th century quilt history. Few quilts have been discovered made in any of the several "Drunkard's Path" configurations that support the theory. If anyone has such a quilt, or knows of such a quilt, please step forward as it would be an historical document of great interest to us all. The same request applies to quilts made in any of the many T designs that include a connection to temperance either on the quilt or with the quilt. I would like nothing better than to describe and illustrate quilts with such documentation here.

Three well-known W. C. T. U. quilts are illustrated together in Jacqueline Marx Atkins, Shared Threads: Quilting Together--Past and Present (New York: Viking Studio Books, 1994), 76-78. One is made in the nine patch pattern popularly known as Shoo Fly with a variety of silks in predominantly reds and blues, another is made up of large silk squares in a variety of browns with each square having an inked or stamped message, and the third is red, blue, and white (like 433c in Barbara Brackman's Encyclopedia of Pieced Quilt Patterns) with Bible verses inscribed on the large white squares.

Several Temperance Tree designs have been published since the 1880s, but what was their significance in relation to the temperance movement? Two entirely different appliqué designs called Temperance Ball were published in 1923 by Carlie Sexton in Successful Farming (Des Moines, IA), January 1923, and by Comfort (Gannett, Augusta, ME), July 1923. What was their significance if any? These are the only occurrences for the word, temperance, in my database containing more than 19,000 documented entries that lists every known quilt design every time each has been published up to, but not exclusive to, 1970.

Another pattern that may or may not have a temperance connection is the pieced tumbler or goblet design. Mrs. E. C. Turner of Nunda, Illinois, asked readers of American Woman (Vickery & Hill, Augusta, ME), September 1906: "Has any one the quilt pattern called the 'Tumbler'? I have watched for it a long time, hoping every month to see it? I saw a quilt pieced in this fashion when I was but a girl, and cannot remember how the bottom of the 'tumbler' was arranged." The April 1907 issue includes her letter of appreciation to "all who so kindly responded to my request for the 'tumbler' block," and the editor published the design in August. In 1930, the Kansas City Star published a similar design called the Goblet and repeated it in 1934 as Water Glass or W. C. T. U. Block.

Using The Quilt Index as the indicator (https://quilti.dev.matrix.msu.edu/search/quilts/), red and white "Drunkard's Path" quilts outnumber blue and white quilts almost two to one in the group attributed to the late 19th century and early 20th century. Will this statistic continue to hold true as more state project records are added to the Index? We don't yet know the answer.

Roderick Kiracofe effectively tackled the blue and white question in The American Quilt (New York: Clarkson Potter, 1993), 127-28: "Some quilt historians have recently theorized that the popularity of the blue-and-white color combination was a result of the influence of the Women's Christian Temperance Union (WCTU). This organization, dedicated to publicizing alcohol's threat to the family, was founded in Ohio and had as its colors blue and white. Many fine quilts in this color combination have been found in this area, and a number of them are made in the Drunkard's Path pattern.  As compelling as it may be to theorize about the connection between the WCTU and blue-and-white quilts, the truth is more likely to be that quiltmakers simply found the combination pleasing. Although the majority of existing examples come from the 1860s, there are later quilts that date from 1880 to 1920, with most of them from the last decade of the 19th century, as the colonial style became popular. As a writer* in an 1898 issue of The Modern Priscilla stated, "Color harmony is the key-note to success [in patchwork], and simplicity the next most important consideration. . . . All things considered, [a] pretty indigo blue and white print and white muslin combine beauty with the coveted old-time air more effectively than any style of cotton patchwork."[i]

Sandi Fox illustrates a red and white "Drunkard's Path" quilt in For Purpose and Pleasure: Quilting Together in Nineteenth-Century America (Nashville, TN: Rutledge Hill Press, 1995), 111-13. Dated 1896 on one block, it is boldly inscribed "W. C. T. U. / Union Springs" across two joining borders. Believed to have been made in New York (Union Springs is a few miles southeast of Seneca Falls in western New York, site of the first national women's rights convention in 1848), it is today in the collection of the Los Angeles County Museum of Art, gift of the Betty Horton Collection. The quilt is illustrated online but is turned 90 degrees so that the W. C. T. U. inscription is in the borders on the right side of the photograph but isn't visible. (

(Click the lower left corner to expand the image) This undated blue and white W. C. T. U. quilt attributed to the Liverpool, Ohio, area is pieced in a pattern known as Pincushions and Cucumbers in the 1880s and 90s, and as Orange Peel, plus a variety of names after 1900. Names on the quilt include the town doctor and the shoe store merchant and his wife. It appears to be a fundraiser but no further details are known. (Photographs from an online auction, courtesy of Barbara Brackman.)

(Click the lower left corner to expand the image) A brief tutorial on the several configurations of the "Drunkard's Path" group of designs: Each block is made up of 16 smaller blocks, 8 with a dark quarter circle and 8 with a light quarter circle, forming a block with an X appearance when completed. The four patch in the center of each block forms a swastika-like design that can be flipped mirror image--either clockwise or counter-clockwise depending on the quiltmaker and her source for the design. Obviously these designs can be just as confusing for the engraver as they can be for the quiltmaker so there's no way to know how accurately the engravers portrayed each design. All we have to go by are their finished products.

The Designs and the Earliest Known Publication for Each Configuration. 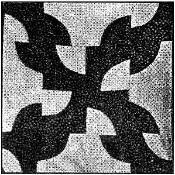 This is the configuration that I see as four birds flying around each block. 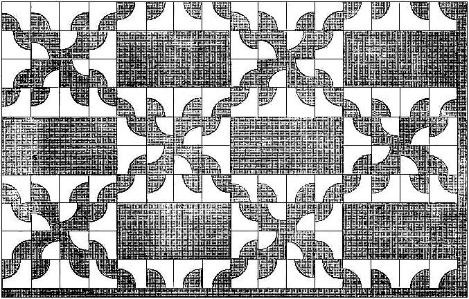 Robbing Peter to Pay Paul, also known as Wonderer's Path in the Wilderness, or Way of the World, Farm and Home (Phelps, Springfield, MA), March 15, 1890; clockwise configuration (scanners don't do justice to engravings with fine lines placed close together). This is the configuration that the Ladies' Art Company (St. Louis, MO) first assigned as No. 154 Robbing Peter to Pay Paul in their catalog in 1895-1897, then replaced 154 with an entirely different design several years later but retaining the same name, and instead assigned the Farm and Home design as No. 220 Drunkard's Path, the earliest known appearance in print for this name as a quilt pattern. Checking GoogleBooks for 19th century temperance publications, I found that the phrase, drunkard's path, was commonly used in those publications as early as 1832 but only in reference to a man who was drunk. Mrs. Annie Wittenmyer published History of the Woman's Temperance Crusade in 1878. Several years later (exact year unknown), Henry Brockstedt, founder of Ladies' Art in 1889 and originally a book publisher in the 1870s and 80s, reprinted Mrs. Wittenmyer's book. While the word, drunkard, appears 32 times in its pages, the phrase, a drunkard staggering home, is the closest to the phrase, drunkard's path. However, it is not a leap to understand why Ladies' Art christened the Robbing Peter design as Drunkard's Path--the Brockstedt family had likely read that phrase many times in other temperance literature.

I have recorded three more variations published in later years that will not be included here. Instead, this unique variation will be the last one illustrated.

The state projects are recording even more names: 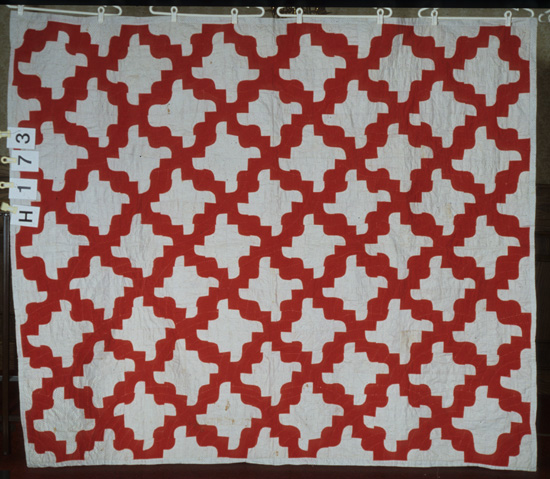 A red and white quilt documented by the Iowa project (H-173) was called Crooked Road by the maker because she didn't want to call it Drunkard's Path. 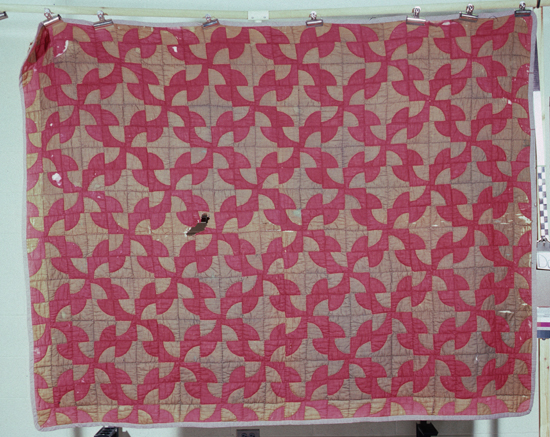 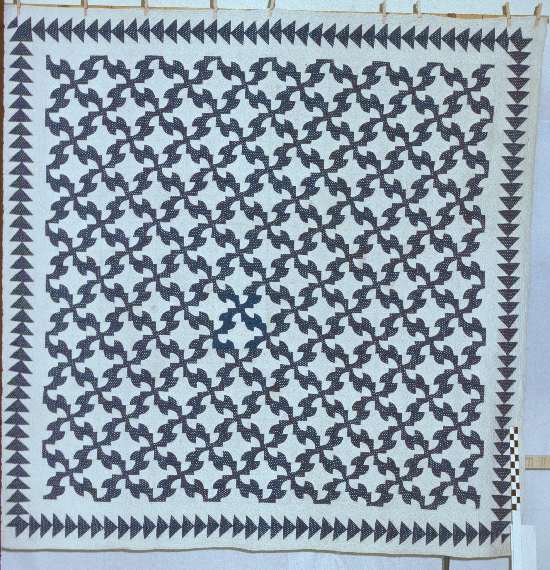 As a quilt design, the "Drunkard's Path" name has not been found in contemporary literature prior to 1895-1897 when Ladies' Art created it and did not become a pervasive name until the 1920s and 30s. Today the name's commonality has pushed the more romantic and suggestive names into near oblivion.

The Many T Quilt Designs.
There are more quilt block designs based on the letter T than any other letter of the alphabet which has caused speculation in recent years that they signified "T for Temperance" among quiltmakers. However, no quilts have yet been discovered made in any of the multitude of T configurations that support the theory either inscribed on the quilt or with accompanying documentation.

Information supporting the temperance theory has not yet been found in the volumes of contemporary material that historians, including myself, have combed through for 19th century and early 20th century quilt history. The designs that were published with accompanying text never mentioned the temperance movement or the Women's Christian Temperance Union. In fact, many needlework editors seem to have avoided the subject altogether such as Mary E. Bradford (Hearth and Home, Augusta, ME) and Nancy Cabot (Chicago Tribune) to name just two. Even magazines that were primarily made up of reader contributed material, such as The Household (George E. Crowell, Brattleboro, VT), and published quilt related discussions including exchanges of T designs, never mentioned temperance on pages devoted to needlework subjects. Perhaps temperance was just too political a subject, but if that was not the case, then it seems logical to assume that T quilt designs were simply an interesting design and nothing more. Perhaps quiltmakers, designers, and columnists just enjoyed experimenting with how many ways a basic design could be configured. But that's conjecture on my part. Instead, we want documentable proof, and none has yet been found to connect T designs to the temperance movement.

Following are twelve engravings of T designs published in the 1880s and 90s. Two details stand out about them as a group--except for one or two, the names are not particularly imaginative, and there's not a "Temperance T" among them. There are several more designs in my collection of 1,000+ vintage quilt blocks that have no known published source, and, of course, many more variations on this theme were published after 1900 and temperance is not linked to them either.

Note: This essay will always be "under construction" as we continue to search for quilts in one of the Drunkard's Path configurations and any T design that have documentable connections to the temperance movement.