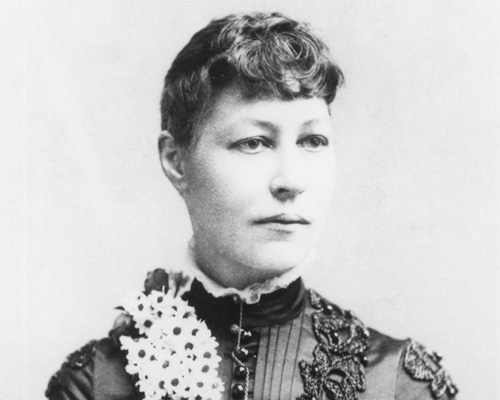 Known as either "Eugenia" of "Genia," Meacham learned quilting from her mother and was also known to be proficient in tatting, corcheting, and other sewing skills. Her niece, Grace Field, tells how she acquired the Log Cabin and Ocean Waves quilts from her aunt in 1915.

We were all members of the Baldwin Prairie Baptist Church in Union and attended faithfully. My Aunt Genia was president of the Union Ladies Aid and wanted to give to a special project they were wanting to raise for the church. One day Mrs. Kadish, a Chicago woman, who was living at her family's cottage at Baldwin Lake for the summer and bought milk here regularly from my mother, saw Aunt Genia's Ocean Wave quilt and admired it greatly. Aunt Genia said she's sell it for $15 and give the money to the Ladies Aid for the church. Mrs. Kadish was delighted but said that she did not have $25 with her right then and she would buy it later when she came for milk again. I heard this conversation and went in distress to my mother in the kitchen and told her that I wanted the quilt, and it should be kept in the family. I had $15 in my own purse and Aunt Genia would not be out anything. My saintly mother agreed and took on herself the task of going into the parlor, where Aunt Genia usually sat, and telling her that I wanted the quilt and could pay for it myself and it should be kept in the family. So within seconds it was mine...On the next day, probably being a little ashamed of herself for not having given the quilt to me, her young niece, she did give me, free of charge, her much older and thus more valuable "Log Cabin" throw.

Attached to the back of the "throw" to which Field refers is a piece of paper that states:

She pieced this quilt at the age of sixteen during the Civil War of the United States of America. She and her friend Amelia Rinehart, who is buried in the Rinehart Cemetary east of Union, would make trips to the store together and would buy identical pieces of goods (or rather they bought one a divided it). At the end of their work they had identical quilts. The red and black plaid alpaca was from the material used for dresses worn by Eugenia's two younger sisters...they often dressed alike, being close in age and great pals.

Local school, a reader, had a bookcase

Farmer, soldier in the Civil War

Began quiltmaking at an early age. Earlier than 16 at close of Civil War when she made "Log Cabin" quilt. Made 3 quilts that were primarily hers, helped with many others.

Log Cabin pieces were shared by girl friend Amelia Rhinehart and "each had one identical to the others". Ocean Wave pieced with hired girl, quilted by Mrs. War. Irish Chain was made from 2 dresses of her mother after her mother's death in 1885, made with her sisters.