Mary Schafer was an important quiltmaker, historian, and collector in American quilt studies. 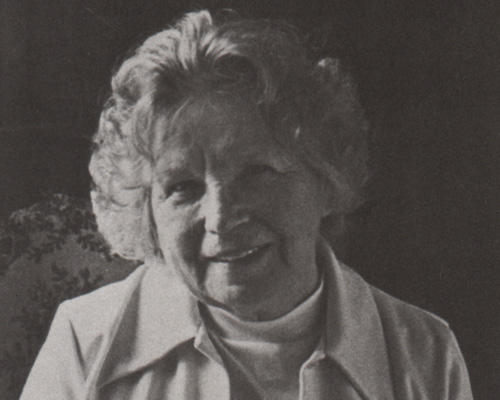 Mary was born on April 27, 1910 in Austria-Hungary. In 1911, her father, Josef Vida, immigrated to Brazil and then the United States where he settled in Kansas City, Kansas. In 1915 he brought his family to join him but within a year, his wife, Mary’s mother, became ill and passed away. Searching for a better life, he moved his family to Flint, Michigan during the early 1920s. There Mary’s interest in needlework was nurtured when women in her neighborhood taught her sewing, tatting, and other needlework forms.

In 1929, Mary married Fred Schafer. By 1940, following the difficult years of the Depression, Mary was established in her own home and was able to find time for herself to sew and knit. Deciding she would like to make a quilt, Mary purchased a kit in 1949. After reading the instructions, however, the project seemed overwhelming and the kit was returned to the store. After her son left home in 1952, Mary found that she had even more free time available and decided to again try a kit quilt. She purchased “Rhododendron” by Progress Company and, despite her earlier fears, finished the quilt in six months. She then bought and completed a second appliquéd kit quilt and was by this time, hooked on quilting.

Inspiration appears in many forms; in 1956 Mary Schafer found hers while cleaning out the trunk of her car. Her son had recently returned from military service, and the homecoming was celebrated with a beach party. Picking up after the event, Mary discovered a wet and dirty unclaimed quilt that had been used as a beach blanket. Wanting to honor the quiltmaker, Mary washed and repaired the quilt in attempt to restore the piece to its glory days. She then created a classic red and white reproduction featuring an original border and quilting designs--elements that became Mary’s trademarks. This was Mary’s first pieced quilt. As Mary researched to find the name of the pattern, she became a subscriber to Aunt Kate’s Quilting Bee and began to amass every reference to quilting she could find. Unable to find the pattern’s name and because the design reminded her of a mill wheel, Mary named it “Linden Mill” after the only nationally registered historical site in her home of Genessee County at the time.

Mary was growing increasingly more interested in quilt history. In order to learn more she began to collect quilts, quilt tops, and vintage fabric which she often incorporated into a new top. For instance, in 1976 she made a Dutchman’s Puzzle quilt in fabrics dating to the early 1900s; the quilt won the blue ribbon for best pieced quilt from old fabrics at the 1978 Festival of Quilts Contest in Santa Rosa, California. Mary transformed many, many old tops into finished quilts and would often add an original border, create a unique quilting design, and have the top finished by someone else.

Through her quilting magazines, she discovered round robins, the practice of swapping patterns through the mail, and subsequently participated in numerous round robins. Through these exchanges of packages and letters, important friendships were formed and Mary became a part of an active network of quilters. Among Mary’s correspondents were Joy Craddock of Denison, Texas, publisher of the 4 J’s; Glenna Boyd, publisher of Aunt Kate’s Quilting Bee; Delores Hinson, one of the founders of the National Quilt Association, and historian Cuesta Benberry.

One of Mary’s strongest friendships to grow out of the round robin exchanges was with Betty Harriman of Bunceton, Missouri who was introduced to Mary through Barbara Bannister, a mutual friend. Mary and Betty shared many of the same tastes in quilt patterns as well as an interest in history. They never met in person but their friendship flourished first through an exchange of letters and later through regular telephone conversations. The pair frequently would work on the same design, each creating their own interpretation of a pattern. Following Betty’s death in 1971, Mary purchased Betty’s unfinished quilts from the family. Bringing Betty’s projects to completion continued Mary’s tie to her friend.

“To raise in popular esteem” the appreciation of quilts became her goal as Mary entered an era she labeled her “challenge” period. Inspired by Marie Webster’s Quilts: Their Story and How to Make Them, she not only increased her commitment to the study of quilts but also began to educate the public about quilts and their history. In 1966, after reading in Ruth E. Finley’s Old Patchwork Quilts of the difficulty of making the Clamshell pattern, she pieced a quilt in that pattern. The National Quilt Association awarded the quilt two blue ribbons at their first show in 1970. Throughout her so-called challenge period, Schafer not only created work which was of an advanced skill level, but also continually paid tribute to important quilting figures she admired.

By the time the quilting revival of the 1970s emerged, Mary Schafer had become a well-known figure in the quilting world. Within the Great Lakes region she spoke to many groups on both historical and technical aspects of quilting. She participated in contests and quilt shows and had numerous exhibits of her collection. As Mary’s renown grew, she began collaborating with Flint, Michigan quilters Gwen Marston and Joe Cunningham; the three worked closely on exhibits, public programming, and the book Mary Schafer and Her Quilts. In 1986 Mary was honored with Michigan Senate Resolution No. 605 honoring her for “many contributions to the art of quiltmaking.” Mary Schafer of Flushing, Michigan emerged as an important quiltmaker, historian, and collector in American quilt studies.