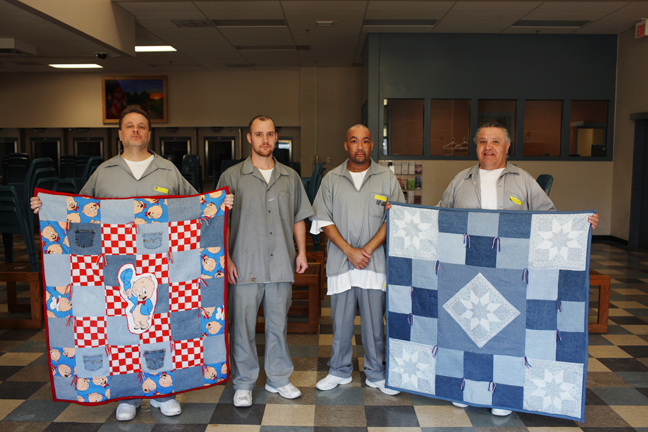 Travis Canon, Christopher Maldonado, Patrick Starr, and Gerald Toahty (left to right), all inmates at the Jefferson City Correctional Center, Jefferson City, Missouri, show some of the quilts they have made in a restorative justice program.
Photo by Chris Mottalini / www.mottalini.com

One arena of collective quiltmaking, connected to several dimensions of health and wellbeing, is based in prisons. One of the first documented uses of quiltmaking as a means for prisoners to cope with incarceration by creating meaningful work was in 1840 and there are numerous accounts of prisoners making quilts as therapy and as a restorative justice activity in which inmates give something back to society. As of the beginning of the 21st century, there has been a proliferation of quilting projects in men and women’s prisons as well as in juvenile detention centers. Typically, these programs are initiated and run by local quiltmakers, many of whom take these projects on as part of their guild outreach activities, who teach prisoners the rudiments and often supply all or at least part of the fabric and equipment needed. Prisoners also scavenge fabric wherever they can within the prison, including using worn prison-issued blue jeans and bright orange offender transport jumpsuits. Some prisoners quilt simply to help pass the time, others quilt as part of restorative justice programs in which prisoners are engaged in activities that help pay their debt to society. Many prisoners find purpose in their life by making these quilts and then giving them to local individuals in need, hospitals and nursing homes, or to the large non-profit charity groups like Project Linus to which other quiltmakers outside of prison are donating. It is a redemptive activity that builds self-worth, a sense of purpose, and a feeling of being connected to something bigger than themselves.