Brighdes Well is one of the few quilts on the Quilt Index known to have been created by a modern Pagan maker.  Donna Armistead, a Pagan quiltmaker of Celtic descent from the Houghton, Michigan area, created the quilt for Christmas (note the red and green Celtic knotwork appliqué) and named the quilt Brighdes Well in honor of Brighde [Brigid], the Celtic Goddess of Healing.

While quilts emerged within a decidedly Christian tradition in the eighteenth and nineteenth centuries in the United States, Neo-Pagans, and Wiccans in particular, have come to view quilts as a magickal craft.  (Wiccans sometimes spell magick with a ‘k’, so as to differentiate their magic from magic done for amusement, such as conjuring and sleight of hand.) The history of Pagan quiltmaking in America is, like the history of Paganism itself, inextricably bound to mainstream Christian culture, and is often either unknown or misunderstood by non-Pagans.

Wicca is a modern Neo-Pagan religion based upon the worship of Nature and the Triple Goddess.  Wiccans use herbs, spells and ritual objects to practice a nature-based magick, or witchcraft, have a strict code of morality (though it differs somewhat from Judeo-Christian moral doctrines), and hold rites and celebrations on the eight solar Sabbats—Samhain (Oct. 31-Nov. 1), Yule (Dec. 21), Imbolc (Feb. 1-2), Ostara (March 21), Beltane (April 30-May1), Litha (June 21-22), Lughnasadh (August 1), and Mabon (Sept. 21)--and on the Esbats, the full moons.  Often associated with the New Age movement of the 1960s and ‘70s, Wicca actually predates this popular movement.

Pauline Campanelli, Wiccan and author of Wheel of the Year: Living the Magical Life, has studied the parallels between traditional patchwork quilts patterns and Neo-Pagan iconography. 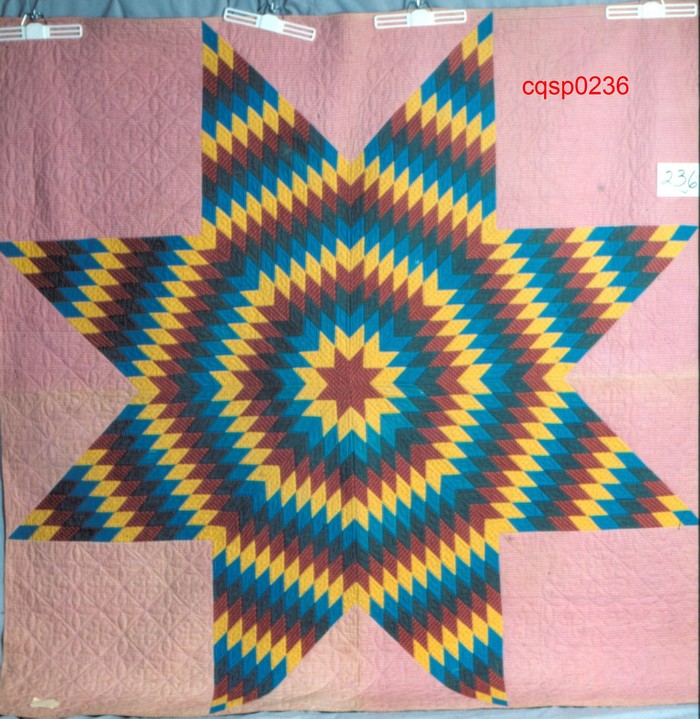 Lone Star
Maker unknown
This quilt was found in a trunk with four other quilts.
Documented by Connecticut Quilt Search

Whether they are called Lone Star, Star of Bethlehem, or California Star, to Pagans they are Sun symbols, and the eight points of the star are the eight Solar Sabbats.  Both Four Square and Log Cabin designs are symbols of the Earth.  Whether it is a Log Cabin, a Nine Square, or a Four Square, most patterns are derived from the balanced and harmonious juxtaposition of light pieces against dark pieces.  To the Pagan this idea expresses the balance and harmony of the universe as created by the Gods, which is reflected in the light and dark halves of the Wheel of the Year, the phases of the Moon, and all the rhythms of Nature.  (Campanelli, 25)

Besides containing symbols that resonate with Wiccans, recalling the Sabbats and the inherent balance of the universe, some traditional patchwork quilt patterns are thought to possess inherent magickal powers.  Thus, the act of quiltmaking can actually serve as spellcraft for the modern witch.

There are many specific magical purposes for which a quilt can be made.  A quilt for healing might be made in one single eight-pointed star design representing the healing, life-giving properties of the Sun…  The Dresden Plate design, one of the few based on the circle, will protect the one who sleeps under it, especially if it is worked in shades of blue.  [insert image of blue Dresden Plate quilt here]  The Pine Tree design, one of the oldest quilt patterns, represents to a Pagan the Tinne or Tannenbaum, or sacred tree of birth and rebirth, and a quilt made with this design gives its blessings to new beginnings for anyone who sleeps under it.  Quilts with Four Square or Log Cabin designs have fertility magic and will aid those wishing to conceive a child, and also those who are involved with agriculture.  (Campanelli, 26)

Campanelli also documented a magickal ritual for making a quilt:

Assemble all your materials together—fabrics, cut pieces of calico, needles and thread—and as you stitch the first two pieces of cloth together, with the very first stitch state firmly:
With this stitch
The charm’s begun!
From then on, each time you work on the quilt or sit down at the quilting frame, hold in your hands the material you plan to work on during that session.  Visualize clearly the purpose that you are making the quilt for and then release the energy into the fabric.  You may wish to cast a Circle around yourself each time you work, and burn incense or light a candle of the appropriate color.  When you have finished the quilt and are about to tie off the very last stitch, state something like:
With this knot
The Magic’s bound!  (Campanelli, 26)

It is impossible to know with certainty how many quilts on the Quilt Index have been made by Wiccans or other Neo-Pagans.  A chief obstacle to documenting the presence of Pagan quiltmakers is a quilt documentation project’s failure to ask about the quiltmaker’s religious beliefs and backgrounds and an unwillingness to volunteer this information on the part of the Pagan quiltmaker or their family.  This matter is further complicated by the fact that quilts made by monotheistic or secular makers are often still seen to have inherent magickal properties by Wiccans, and as with Brighdes Well, many Pagans celebrate Christian holidays as well as the Sabbats, mingling Pagan religious inconography and nomenclature with Christian.  For example, a quilt on the Quilt Index with ‘Halloween’ in their title may actually have been created for the Pagan ‘Samhain,’ and an ‘Easter’ quilts may actually be an ‘Ostara’ quilt.

Even if one does not believe that quilts can work healing magick and has grown up outside the Pagan tradition, having a basic understanding of this American religious and cultural tradition’s beliefs and practices surrounding quilts and quiltmaking is important for the quilt scholar.