Under a grant from the Institute of Museums and Library Services, the Quilt Index began to add short essays about a variety of quilt-related topics by Quilt Index staff and invited contributors. Each essay currently consists of an unlimited text area, a side bar of featured quilt image records, and an option of embedding specific quilt, ephemera, or other images in the text area. Future plans for the Quilt Index call for adding new essays by scholars around the world.


Here at the Quilt Index, tradition meets technology head-on, allowing you to use your computer to see and study more than 52,000 quilts from four centuries. This archive is unique: nowhere else will a journalist or other researcher have access to this many quilts.


The Alzheimer's Art Quilt Initiative™ (www.AlzQuilts.org) was a national grassroots charity that began in 2006 and ended in 2013 with a mission to raise awareness about and to fund Alzheimer’s research. Quilt artist Ami Simms of Flint, Michigan, who founded and served as volunteer executive director of AAQI, was inspired to start this effort by her mother, who had Alzheimer’s. The AAQI auctioned and sold donated quilts, sponsored a nationally touring quilt exhibit, and achieved a goal of raising $1,000,000 to support basic research about dementia and Alzheimer’s.


The women of the American colonies and the early United States stitched their quilts in a variety of styles. This essay looks at style from the mid-eighteenth century to 1815 or so.


Quiltmaking could be an empowering form of self-expression for immigrants to the United States at the turn of the 20th Century, as in this case study of Hungarian-born Chicago quilter, Mary Mihalovits Gasperik, written by her grand-daughter, researcher Susan Salser.


The quilts represented in this essay survey three centuries of American political life, spanning from quilts celebrating the birth of the Republic to quilts reacting to the events of September 11, 2001. The meanings and visual rhetoric of these quilts were shaped by wars, presidents and policies, new contacts with other cultures, innovations in design and technology, and changing social relations. Through all of these changes, women (and men) in America have given voice to their patriotism and political views through quilts. 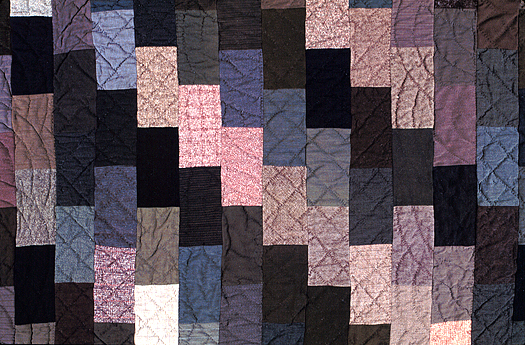 Amish and "English": Quilts from the Illinois State Museum


This comparative exhibit of Amish and “English” quilts from the Illinois State Museum collection dispels the notion that Amish quilts were made in isolation from larger American trends. In Illinois, Amish and “English” quilters were using the same fabrics, techniques, colors, formats, and patterns, with only a few exceptions. The Amish didn’t use print fabrics in quilts made for their own use because of their religious beliefs, and they rarely used applique patterns or large amounts of white fabric.

At the Quilting Bee

Beyond Diamonds and Bars: The Cultural Production of Amish Quilts


During the last half of the 20th century, Amish quilts underwent a cultural transformation, starting as objects given as gifts within Amish families but unknown to the outside world, becoming valuable works of art, and eventually commodities sold by Amish entrepreneurs to consumers. Although connoisseurs have been most interested in Amish-made quilts from the late-19th and early-20th centuries, quiltmaking in this community is far more than the now iconic graphic diamonds and bars.


Patricia Cox Crews, Willa Cather Professor of Textiles at the University of Nebraska-Lincoln and Director of the International Quilt Study Center, reviews the influence of botany and gardening on quiltmaking.


Amanda Grace Sikarskie describes Pagan Quiltmaking and the magical qualities these quilts have.

Check Your Bias: A Handmaiden Quilt


The story of a Sunbonnet Sue quilt.


Nebraska’s most distinctive quiltmaker, Ernest Haight, belies the notion that quiltmaking is women’s work, and even more paradoxically, his involvement in the art resulted from his father’s example and encouragement, rather than his mother’s.


Janet Catherine Berlo describes feminism and nationalism in the designing and constructing of Quilt Heritage in 20th-Century United States. Berlo hopes to make a better understanding of the multi-layered history that surrounds quilts.


Although there is some truth to the frugal stereotypes of "Depression Quilts", the current research being conducted across America by quilt projects indicates that our view of Depression quilts is far too narrow. Even the name is wrong, as there is much evidence that the fashion for making scrappy, pastel quilts dates to about the mid-1920s and the style persisted until about the 1950s.


Laurie Woodard introduces and describes how Hawaiian applique quilts depict the lush flora of the islands and why they are so popular.

I Love New York Beauties: A Brief History of an Iconic Quilt Pattern


Leslie Jenison describes the quilt New York Beauty from the quilt pattern by Mountain Mist, a division of Stearns & Foster.

In the Shadow of the Quilt: Political Messaging in Quilts


Quilts have been used to visualize political messages and express feelings. In this essay, Marybeth Stalp discusses the negative messages that certain quilts have portrayed.

Lone Stars: A Legacy of Texas Quilts: A New Perception of Quilts


Karey Patterson Bresehan and Nancy Obryant Puentes write about early Texas quiltmakers who broke all the rules, even the ones they didn't know exsisted, when designing their quilts.


Mary participated in the Illinois State Fair from 1940-1966 winning over 40 ribbons. 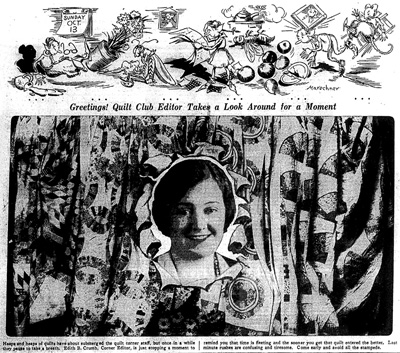 
Joe Cunningham is part of the stereotypical women's domain of quilting. Here, he discusses the difference between women quilting and men quilting.


Quiltmaking in North Carolina began as a pastime for privileged women and then later to the poor out of necessity. Today, quilts are back to being a social pastime due to the increasing number of women joining the work force.


Amy Milne discusses the dark and the light of Notan, a Japanese Principle, in the use of quilts.


A gallery of quilts made in at the Immaculate Conception Church in Peshawbestown by Odawa school girls.

Piecing Together the Past: The Quilts of Florence Peto


Quiltmania Magazine article discussing the work of Florence Peto as quilt scholar and maker, as well as the quilt collections of the Shelburne Museum in Vermont. 
The quilts showcased here represent the Quilt Alliance's national quilt contest started in 2006. Each year the Alliance presents a small quilt contest with an open-ended theme. The goal of the contest is to reach out to today' s quiltmakers with a challenge that engages them with our mission, document their response and raise funds via an auction of the quilts (all entrants donate their quilts to the Quilt Alliance). 
Margaret Atwood's 1997 novel, Alias Grace, frames each section of the novel with carefully selected and hand-drawn quilt patterns. This essay links examples of the patterns from the Quilt Index to the narrative structure of the book.

Quiltmaking Traditions in Nebraska: An Overview


In her essay, Patricia Cox Crews describes quiltmaking in Nebraska by first looking at Nebraska itself and then into quiltmaking from 1870-1940. She then introduces to the reader the Nebraska Quilt Project.

Quilts and Mathematics in Education


Quilts and elementary mathematics go hand in hand since quilts are made up of various shapes and sizes. 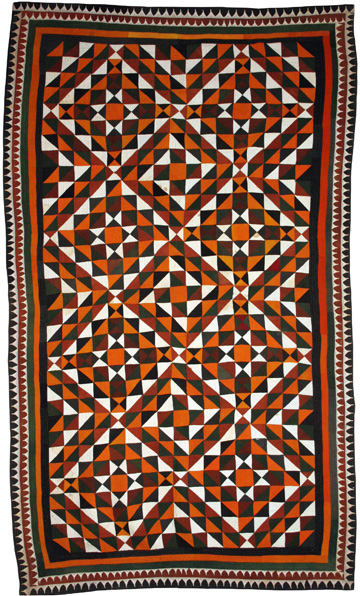 
Ralli quilts are full of color, patterns and energy. They are made of cotton scraps and are used to cover cots. Rallis help those not in the ralli making culture understand that community and culture.


This essay describes the Signature Quilt Project and ways this project can be used for research. 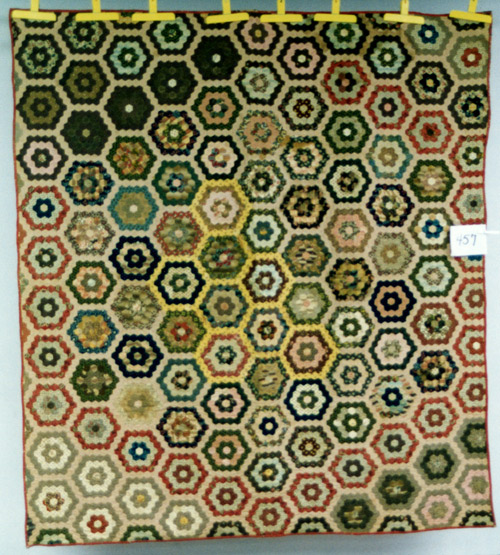 
The Rhode Island Quilt Documentation Project brought to light a substantial number of eighteenth and early nineteenth century quilts that represent how quilts and quilting developed in the Ocean State. 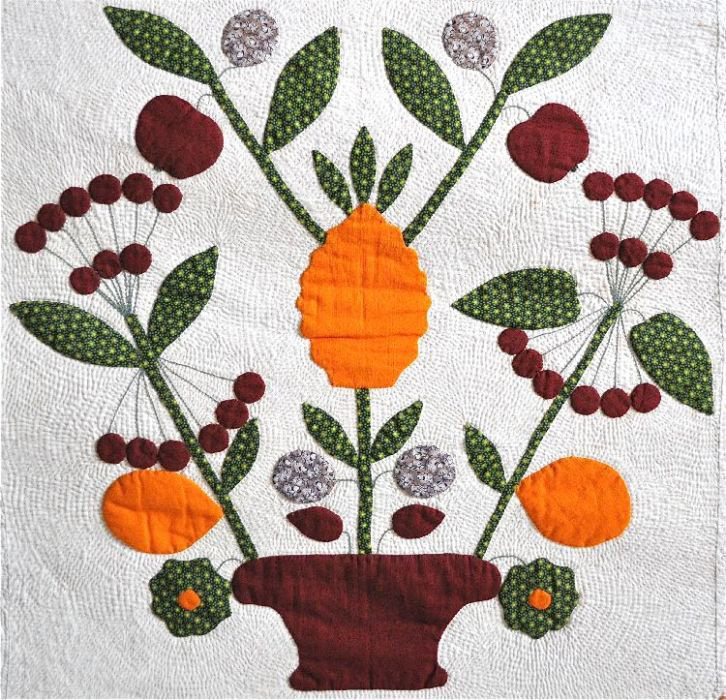 
The mis-identification of one quilt lead it away from its true origin. Through the work of quilt scholar's this quilt was reunited with its past.


In 1981 The Kentucky Quilt Project was formed to survey the state's quilts. It was the first of the state quilt documentation projects. Since 1981 groups in most states, as well as Canada, Great Britain, New Zealand and Australia have undertaken quilt surveys informed by the methods and directions of The Kentucky Quilt Project, thereby spawning the largest grassroots movement in the decorative arts in the last half of the 20th century.

Texas Quilting: One Hundred and Fifty Years of Heritage


Texas Heritage Quilt Society search days take place across the state to gather information on quilts and their makers. Texas quilts of today place markers on important moments in women's life, like quilts have done in the many year's before the 1980 revival in Texas.