The women of the American colonies and the early United States stitched their quilts in a variety of styles. This essay looks at style from the mid-eighteenth century to 1815 or so. Quilters working before the end of the War of 1812 created quilts with our limited domestically-printed fabrics plus imported chintzes, plate prints and wood-block prints from around the world. After that war ended decades of political and trading troubles with England which dictated our imports and technology, American access to fabric widened with fewer restrictions on international shipping and improved printing methods here and abroad. 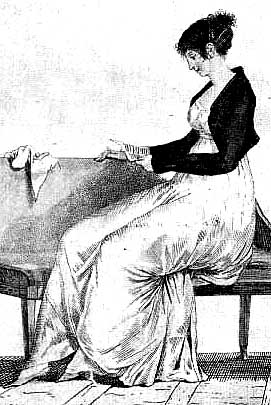 Virginia
The embargo has set every body to making
homespun, Mama has made 157 yards since
October, you will see all the children
clothed in it.
1808
Anne Cary Randolph
To her grandfather
President Thomas Jefferson[i]

American-made quilts continued in the European and Indian traditions of quilted bedcovers and quilted clothing. We find many mid-eighteenth-century references to what we today call wholecloth quilts, backing and batting topped by a single fabric embellished with quilting designs that also functioned to secure the layers together. The transition here from wholecloth quilted pieces to patchwork quilted pieces began in the late-eighteenth century when quilting was fashionable and practical for skirts, bodices and waistcoats. 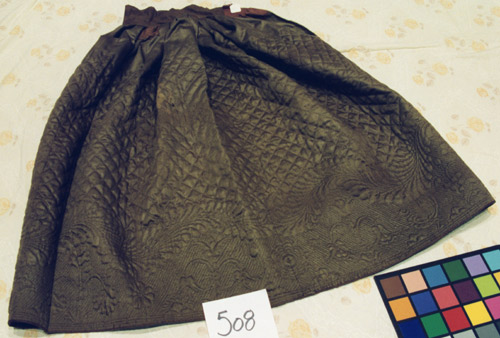 The glazed wool petticoat shows quilting style shared by clothing and bedquilts. Similar designs are seen in eighteenth-century American wholecloth quilts with patterns such as feathers, birds and pineapples accented by a diagonal grid. Filler quilting of close diagonal lines puffs out the images, taking advantage of the reflective wool that imitates a silk satin. 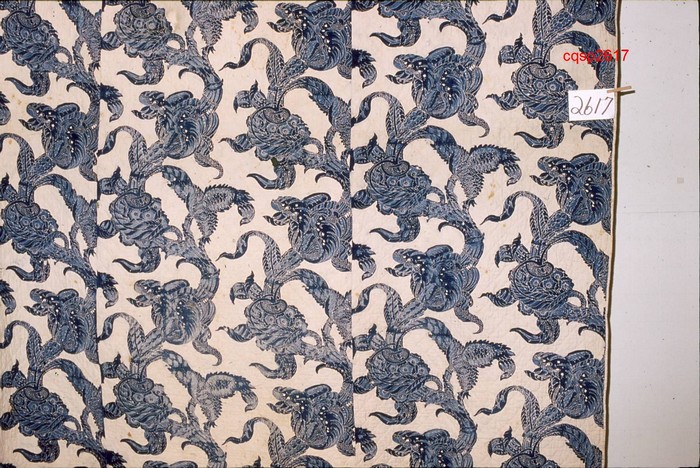 This wholecloth quilt features a large print of the type sometimes described as China blue, presumably because it looks like porcelain design. In 1761 New Yorker Mrs. John Haugan advertised that she "stamps linen china blue or deep blue, or any other colour that gentlemen and Ladies fancies. Bed sprays [spreads], womens gowns." Also called blue resist prints, these unusual designs were block printed by hand in indigoes and  are a good clue to a quilt made before 1800.[ii] 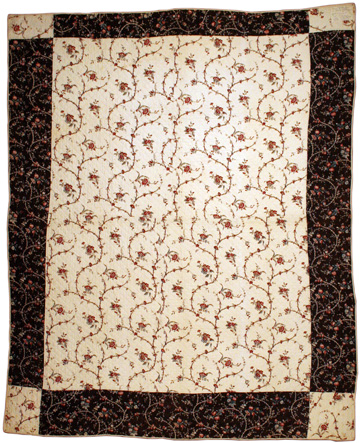 The quiltmaker contrasted two variations of a block-printed cotton, one with a dark ground, the other with a light ground. The print style is now called a floral trail, a style of design repeat based on stems winding across the surface. Almost a wholecloth quilt, this style of framed quilt is seen in America and Great Britain. Mary Bigelow quilted the date into her quilt made from a glazed wool sometimes called calimanco at the time. These reflective wools were prized for fancy quilting because the feathers, pineapples and florals showed so nicely. The Connecticut Quilt Project documented this bedcover made of two different toile (pronounced twahl) fabrics. The prints were done with complex rotary presses on copperplates about a meter square.  Plate prints with fine incised lines produced greater detail than wood blocks.  Designers could render flowers and birds with biological exactness and experiment with new subject matter like portraits, landscapes and current events, as in the print at the top, featuring an American patriotic scene.  Detail in the figures and the size of the plate made color registration difficult, so technology dictated that copperplate prints be monochromatic, typically blue, brown or a pinkish red on a white background as in this quilt.

EMBROIDERED QUILTSAnother type of early quilt was decorated with embroidered images, a style that can be traced back for centuries in Europe. Sixteenth- and seventeenth-century English needleworkers, both professional and domestic, used wool, silk and linen yarns to decorate textiles in a style named crewel embroidery, also called Jacobean embroidery for the Latinized name of King James I who ruled when the style developed. Jacobean wool embroidery is surface embroidery, meaning it does not follow the weave of the cloth as the counted cross stitch used in samplers does. Many of the shapes are filled with stitches, unlike the outline embroidery popular for crazy quilts in the late nineteenth century. Jacobean embroiderers incorporated motifs drawn from natural forms, fruits, animals and especially flowers that, while recognizable as specific varieties, were more often stylized than naturalistic. 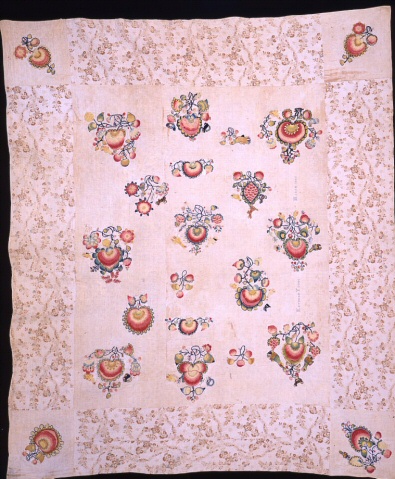 Our earliest patchwork quilts date to the 1770s, the decade we gained freedom from England’s rule. While Bostonians rebelled against taxes on tea and Virginians called a Continental Congress, colonial needlewomen created a fashion for cutting up cotton, linen, silk and wool to refashion into patchwork bedcovers.

Characteristics of the earliest American patchwork quilts include a mixture of fibers, patches of wool, silk, linen, and cotton in the same piece. When quiltmakers did confine their scrapbag to the cellulosic fibers—cotton and linen—they mixed print scale. Large-scale furnishing fabric called chintz was often combined with the smaller-scale dress prints often called calico.

Taste may have dictated how a quiltmaker arranged her blocks, but technology and trade determined the fabrics available to her. Fabric was expensive in the Revolutionary era and the early years of the United States. In 1798, when workers’ wages were counted in pennies, Abigail Adams, the president’s wife, wrote of paying $6 a yard for fine cotton to make a fashionable white mob cap. The muslin, probably imported from India, was so outrageously expensive that she impolitely told her sister exactly what she paid. [iii] “You mention in your letter
about my pieces….I set
more by them than any of
my pieces; one was the
Mariner’s Compass, and the
other was a Geometrical
piece.”
1798
10-1786 Elizabeth Southgate Bowne [iv] The letters GWT and 1795 are embroidered on this quilt, one of the few surviving American quilts with a date from the eighteenth century actually inscribed on it.  The maker used a variety of fabrics and patchwork designs with a central focus of appliquéd florals cut from chintz prints.  She also featured stars and bowknots. Her fabrics were likely imported, although there were small American workshops weaving cottons and linen "domestic cloth" like the whites. A handful of "calico printers" produced the simple small-scale prints with woodblocks. American printers might have printed some of the larger-scale florals, but the copperplate toiles were a relatively new technology confined to European mills. This quilt has been altered with a newer back that was then tied with knots showing on the front, a style favored by seamstresses one hundred years after it was made. Ignore the white ties to see a typical early quilt pieced of small-scale woodblock prints and a large-scale toile, a scenic two-color print made in Europe using the copperplate process. Pieced checkerboards, pieced stars and borders of deep triangles are typical of early quilts. Triangular borders were popular in clothing and quilts in the early nineteenth century, as shown in this fashion plate from 1813. The quiltmaker embroidered "JSHS4J" on the reverse of this glazed wool quilt, but left us no date. The calamanco wool style is a good clue to a late eighteenth or early nineteenth century date and to an origin in New England. The glazed wools were often imported fabrics and many of these calamanco quilts have more homely backs of coarser wools. Most calamanco quilts are wholecloth style but pieced medallion and block-style patchwork quilts survive.

Watertown
A rare example of industry and oeconomy in this luxurious age: ‘A young lady now 16 years of age, daughter of Mr. Jeremiah Peck, an industrious taylor, in this neighbourhood, has for three or four years past been picking up shreds of woolen cloth, of every colour, and at her leisure minutes piecing them together, till she has made herself a bed-quilt of a good size, which was yesterday quilted by a number of her neighbouring young females, and in which there are fourteen hundred pieces of cloth..’ “ Newport Herald, August 14, 1788 [v]
BLOCK QUILTS

Patchwork techniques included what we call piecing and appliqué. Pieced quilts were made of fabric patches joined to construct a surface. Appliquéd quilts featured fabric scraps applied atop a background fabric. The early pieced designs tended to be squares and simple triangle patterns set as frames around a central design or set in a grid, a block-style format. Quiltmakers could choose either block-style or medallion-style sets, or a combination of both as Deborah Wilson did. Quite worn today, her quilt never had a great variety of color, but was stitched from colorfast indigo blue prints that have lasted for centuries with more fugitive pink prints that can only be seen now in close inspection.  Deborah used a variety of patchwork designs including stars with four points and eight points, design ideas still popular today. Anna Hixson used a limited variety of prints, small-scale designs printed with indigo and madder dyes, the kind of prints that might have been domestically produced rather than imported.  There is no central focus here, but the repeat is the classic block-style design that creates a unified secondary pattern. This variation of what we call a nine-patch is one of the earliest patchwork designs. The central design here, as in Jane Travers Gatewood's 1795 medallion above, is appliquéd using a technique we might call Broderie Perse (Persian embroidery). Also called cut-out chintz, the technique features motifs from printed cottons rearranged on a plain piece of fabric in a new composition. Limited color but unlimited needlework skills are evident in this embroidered, pieced and appliquéd medallion. The grapes and florals are fashioned from blue, pink and brown cottons rather than being cut directly out of chintz, an appliqué technique that became increasingly popular in the nineteenth century supplanting the style-out-chintz style by mid-century. The elaborate quilting is stuffed to add another dimension to the design. Stuffed quilting in this whitework style came into fashion in the late eighteenth century as cotton thread became widely available. Here is another early quilt featuring stuffed whitework in the quilting. A fashion for striped fabric in interior design may be responsible for the advent of the strip set quilt. This example, featuring strips of stripes alternated with a small-scale print, is attributed to the early years of that fashion. Two patchwork strips frame a medallion center that includes a panel design featuring an urn of flowers with birds and butterflies. Smaller motifs featuring birds and florals are also printed on the central panel. The central panel and the outer border were printed in the Philadelphia workshop of John Hewson (1745 -1821 ) who was in business there from 1774 until his son took over the printworks after 1810. The quiltmaker has framed an eight-sided panel printed with birds and florals. These panels were imported from England where they probably were meant for cushions and chair seats, but many quiltmakers found them quite suitable for a central focus for their medallions. John Hewson's vase with butterfly panel is the only domestically produced panel yet found. Abigail Hunt used a pattern that became one of the most consistently popular designs in England and its former colonies. Today called Grandmother's Flower Garden, nineteenth-century quilters may have called it Mosaic, Hexagon, Job's Troubles or Honeycomb. Each scrap of fabric was basted to a paper hexagon and the edges were joined with a whip stitch, a technique considered good occupation for young seamstresses who needed to learn to sew a fine seam in the decades before the invention of the sewing machine, which came into popular use in the 1850s. The seamstress might remove the backing papers and quilt the piece as Abigail did. Mary Hayne added a pieced border and some simple appliqué to her mosaic patchwork but never finished out the piece with quilting, a rather typical fate in both England and America for these hexagons pieced over papers.

The reverse of paper template patchwork. The piece was done in the mid-nineteenth century, coincidentally by another family named Haynes.