Gardening - especially the cultivation of flowers - became one of the most pervasive influences in the lives of 19th century American women. Women were encouraged by popular women’s magazines to cultivate flower gardens to benefit from the exercise that gardening provided, as well as to demonstrate their cultivated taste. Scientists, theologians and popular writers extolled the virtues of women who understood floriculture and decorated their homes with fresh flowers and furnished them with floral textiles, in curtains, upholstered furniture and quilts. And, young women who went on to college and who had an interest in the sciences were encouraged to study botany. In fact, botany became the preferred science for women to study during the 19th and early 20th centuries because the study of botany was congruent with contemporary views of acceptable, home-centered roles for women. Therefore, botanizing - the collecting of plants for scientific or amateur study - became a hugely popular activity for women during the 19th century.

Consequently, it is not surprising that quilts of the 19th century reflect the influence of both botany and gardening. Quiltmaking and gardening were integral parts of the lives of most women of that period. An explosion of ladies magazines and gardening publications, further fueled women’s interest in botany, gardening and quilting. Patterns for flower gardens were featured in numerous publications throughout the century, as were patterns for embroidered flowers, quilt blocks, and countless other hand crafted projects, which incorporated floral motifs. 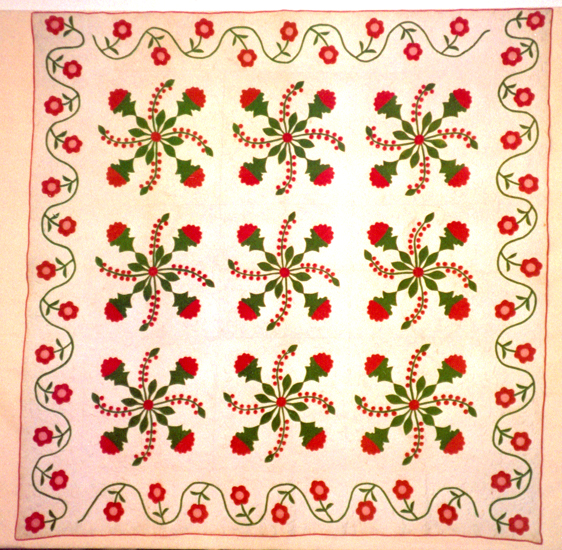 Several developments led to the growing number of flower gardens in 19th century America. First, was the importation of South American and Mexican tropical plants, such as nasturtium, cockscomb and dahlia. This created a taste for brilliantly colored, exotic flower beds. Because the plants could be grown from seed, they proved economical enough to be treated as annuals. Mail-order seed companies appeared as early as 1806 and soon cockscomb, impatiens, nasturtiums and four-o’clocks filled flower beds with their vibrant colors and continue to do so today. In addition to annuals, gardeners imported and planted bulbs in masses. Tulips and narcissus quickly became popular items in American garden nurseries. And as exotic flowers became popular in flower gardens of the time, they also began to appear in quilts of the period. Quilts featuring red and green floral appliqué on white grounds were a favored style during the mid 19th century from 1840 to about 1870.

A second reason for the popularity of gardening throughout the 19th century was that writers for a variety of popular publications extolled gardening as an important activity for all Americans, not only for wealthy landowners. As Andrew Jackson Downing, the son of a New York nurseryman, and probably America’s most influential exponent of home beautification, wrote in one of his popular architecture and gardening books: beautiful gardens not only serve a healthful purpose, they also serve a moral purpose as “an unfailing barrier against vice, immorality and bad habits.” Other writers throughout the century stressed the role of gardening in the development of taste, religion, health, and purity.

Quiltmaking, likewise was a well-respected and popular pastime because, it not only resulted in a useful item for the home, it kept one’s hands busy at productive work. Quilts from the period clearly required hours of skilled handwork, evidence that women heeded the adage that, “Idle hands are the devil’s workshop.” 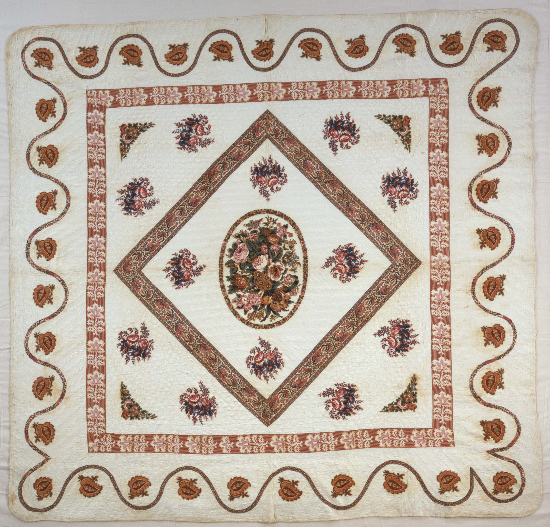 Nineteenth century American gardeners considered the formal geometric gardens of the French and the English the epitome of style and strove to duplicate them throughout the 18th century and into the 19th century. These gardening ideas were conveyed in a variety of publications that lent themselves not only to garden design, but also to quilt design. 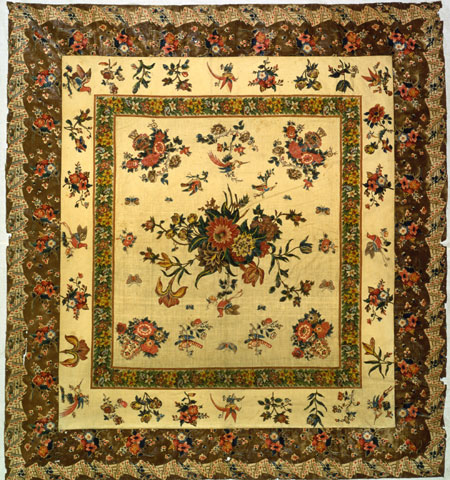 For example, at the same time that formal gardens were popular, broderie perse or chintz appliqué quilts were at the height of popularity between 1800 and 1840. Makers used clusters of flowers cut from chintz and appliquéd them onto an expanse of white cotton cloth. In both the parterre de broderie garden and broderie perse quilt, the designer incorporated groups of flowers onto a large expanse of lawn or of plain white muslin.

The chintz fabrics used in this style of quilt were expensive and were likely imported from England. The United States’ fledgling textile industry could not produce printed fabrics of this quality during this period. In addition to their role in beautifying the home, chintz appliqué quilts served as status symbols. Their makers were women of means, who could afford expensive imported cotton fabrics. And, they had the time to devote to extravagant needlework because they had domestic help - either servants in the Mid-Atlantic states or slaves in the South.

During the first three quarters of the nineteenth century, gardeners, landscape designers and quiltmakers all believed that symmetrical designs were simply more pleasing. This is reflected in their gardens, as well as the quilts they made. Thus, American quilts were almost always designed as a symmetrical, well-ordered whole, like American flower gardens of the period. 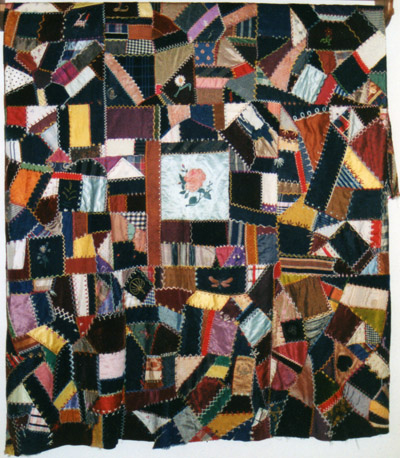 American quiltmakers grew to favor asymmetrical formats, such as the random asymmetry seen in the blocks of this Crazy quilt. Crazy quilts became the rage during the last quarter of the 19th century following the Centennial Exhibition of 1876 in Philadelphia, which was organized to celebrate this milestone in U.S. history. An estimated 10 million Americans came to the Exhibition in Philadelphia. Countries from around the world contributed displays for this event. The Japanese pavilion shown here, was one of the most popular displays. It allowed Americans to see textiles and decorative arts from Japan for the first time. Japanese artists are masters of asymmetrical design. Many late 19th century interior designers and American social critics admired this exotic new art and encouraged the adoption of the Japanese style. Thus, it is believed that the surge of interest in Crazy quilts was sparked, in part, by the Japanese decorative arts seen at the Philadelphia exposition.


The influence of the Japanese style may be seen in the asymmetrical, randomly sized pieces of the popular Crazy quilts and in the realistically rendered floral designs and insect embellishments, including bees, flies, and spiders. Makers of Crazy quilts could depict flowers and insects realistically because they used embroidery or paint to embellish their blocks. This allowed finer detail than was possible in appliqué or geometric piecing techniques used earlier in the century. 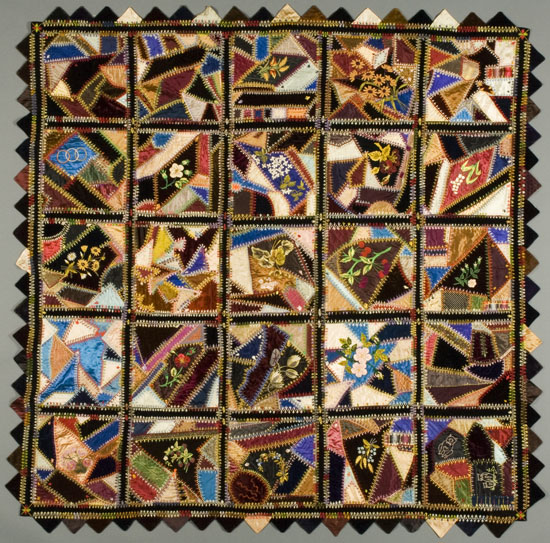