Notan is the Japanese design principle of light and dark. The eastern symbol of the Yin and Yang, the most recognizable example of Notan, illustrates this visual duality succinctly--black and white occupy equal space in this image and each contains a trace amount of the other to demonstrate their inner dependence. Without white, black has no context and vice versa. Notan creates balance and eliminates hierarchy.

Effective Notan design is similar to the Western design concept of positive and negative space, in which a composition or pattern contains positive figures and anything that is not considered a figure is referred to as a negative shape or ground. However, in a successful Notan design light and dark shapes have equity and what is figure and what is ground alternates as the eye moves around the composition or pattern.

Notan is most often demonstrated through pen and ink and cut paper drawings, however examples can be found in a variety of mediums including printmaking, ceramic tile design, architecture and very often in quilts. The common denominator amongst these mediums is the module, or a single design element that is repeated to achieve a pattern. The design of this module and the visual effect that is created when the module is set in repeat are tools for Notan. In this gallery you will see examples of quiltmakers who have used light and dark to enhance shape, placement and repetition to make their quilts both dynamic and harmonious. 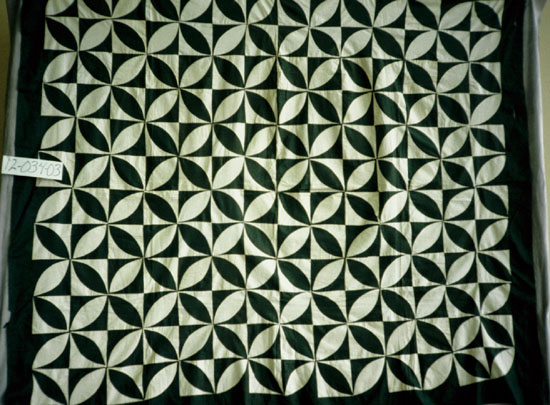 This much-loved pattern, Orange Peel, employs the simplest of Notan techniques --a four patch design with an abstracted leaf or petal shape is mirrored both vertically and horizontally across the axis of the four patch, changing from light to dark on either side of each axis. The effect is highly dynamic and contains much variety--the grid of squares is still recognizable and a new element is formed, a conceptual circle formed by the four arcs of the outside of the leaf shapes. Another shape appears--a four pointed star--created by the inner arcs of the leaf shapes. A feast for the eyes--achieving the ultimate visual success--keeping the viewers’ eyes moving around the quilt again and again. The proportion of the shapes and the simple divvying up of the black and white make it successful Notan design--well-balanced, half dark and half light. In this Oak Leaf quilt, the Notan effect is achieved through the use of shape and line. Notice how the thin curves of the dark cotton flower stems create the outline of a leaf or petal in the white area in the center--all rotating around the center rectilinear shape. The dark shapes appear to be both figure and ground and so do the white petal shapes--Notan at work. In this variation of Robbing Peter to Pay Paul, the four patch grid of alternating dark and light squares sits solidly in the background while the diagonal lines created by the negative and positive petal/leaf shapes connected by tiny four patch squares practically zip up and down the quilt from corner to corner, side to side. This Drunkard’s Path quilt (another variation of Robbing Peter to Pay Paul), seen as a whole, is almost dizzying and aptly named. The full view shows how the dark shapes connect to create a regular but nontraditional grid resembling a network of DNA strands. The detail view of this quilt shows how the white shapes appear to be more in the foreground and portions of the black shapes take on new shapes like the pinwheel in a square that alternates with a truncated white cross. 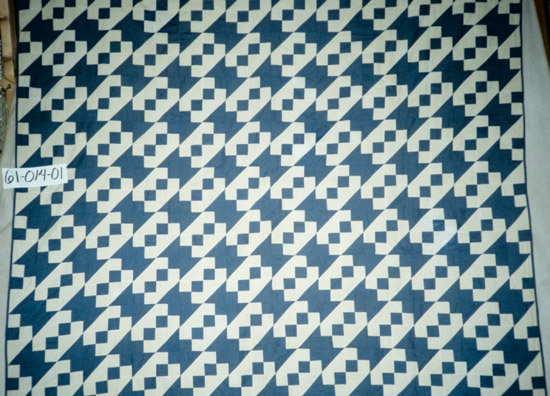 This quilt is a great example of Notan created when the shape of an individual module repeated against a contrasting ground reveals a second shape of equal visual interest. 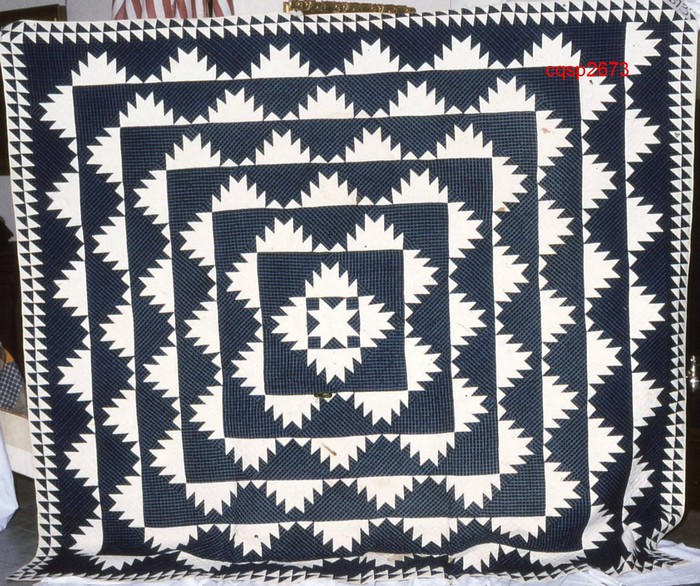 Delectable Mountain
First half of the 19th century
Private Collection

Notan achieved through an overall effect of pattern is successful not only when the light and dark is balanced, but also when new shapes are created from the conceptual boundaries created when shapes abut or align. In this quilt a strong white cross is created through overlapping rectangles defined by regular borders of triangles, alternating between light and dark. The multiple diagonals and the transition of shape size in this quilt create a balanced Notan design that moves the viewer’s eyes from the center to the border and back in a compelling loop. 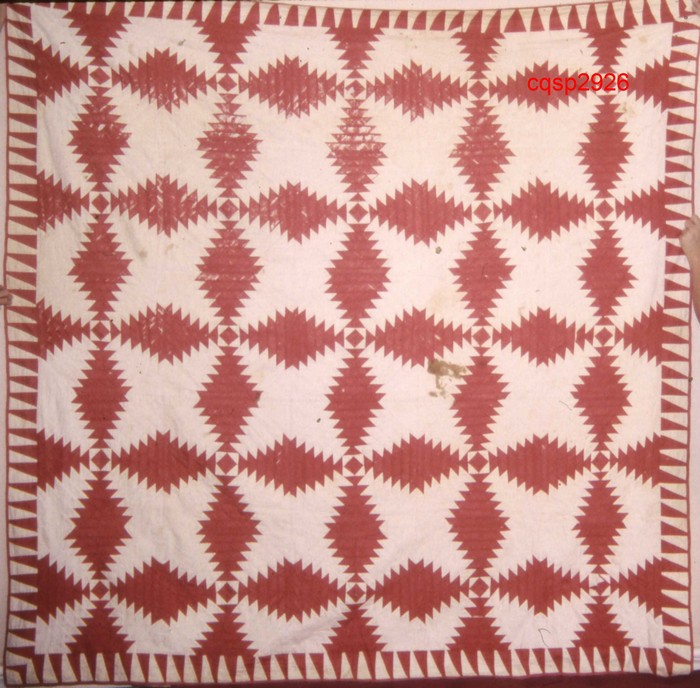 This Log Cabin or Pineapple quilt also demonstrates the illusion of secondary shapes created by the placement of module shapes and a careful use of light and dark. The arrangement and the construction of the dark diamond shapes (pieced together with triangles so the edges of the diamond are softened) creates the illusion of overlapping circles defined by the light areas, which otherwise would appear as a background instead of a group of shapes. 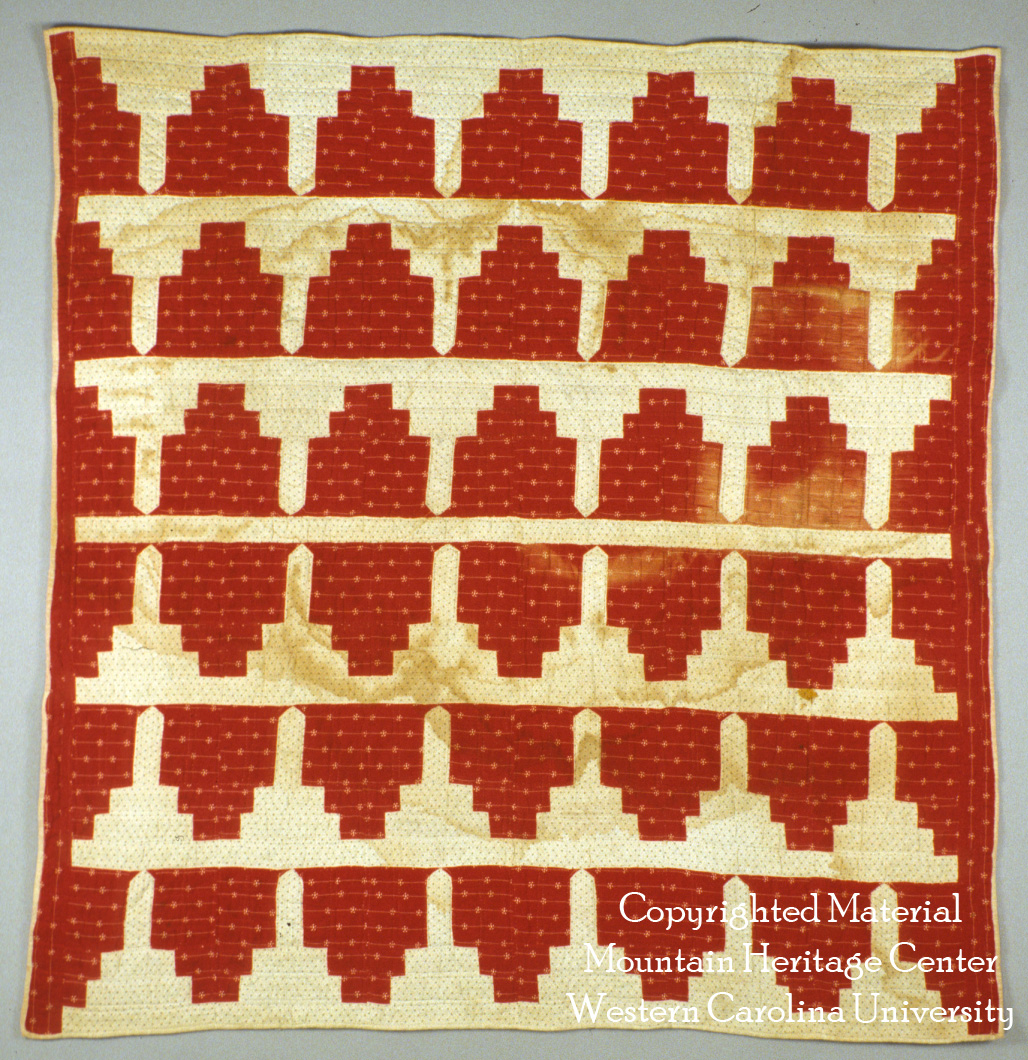 This quilt, a simple red and white rendition of the Garfield’s Monument pattern, displays strong Notan throughout the surface, except for edges of the quilt on the left and right sides. Near the borders the red forms transform into background and the white shapes come to the surface as an object in the foreground. If you use a piece of paper to mask the left and right border of the quilt the Notan effect becomes much stronger--the red and white shapes then begin to switch back and forth, taking turns as figure and ground. This stunning red and white Virginia Reel quilt illustrates a simple harmonious reversal of interlocking elements, half dark and half light. The viewer is hard-pressed to choose a dominant shade because each has equal recognition in the design. Another simple interlocking Notan design of light and dark elements. This elongated and angular ogee shape is an interesting alternative to the four patch repeat. Hawaiian quilts are unique examples of Notan, traditionally created using a method of cutting large shapes from folded fabric similar to the process of cutting a snowflake shape from paper. In this Hawaiian beauty the dark ground fabric makes a strong figure at the center of the quilt and around the outer edge of the lighter fabric. A Notan effect is seen clearly in the areas where the light fabric comes forward just as strongly--see the white lobster-like shapes on the diagonal?