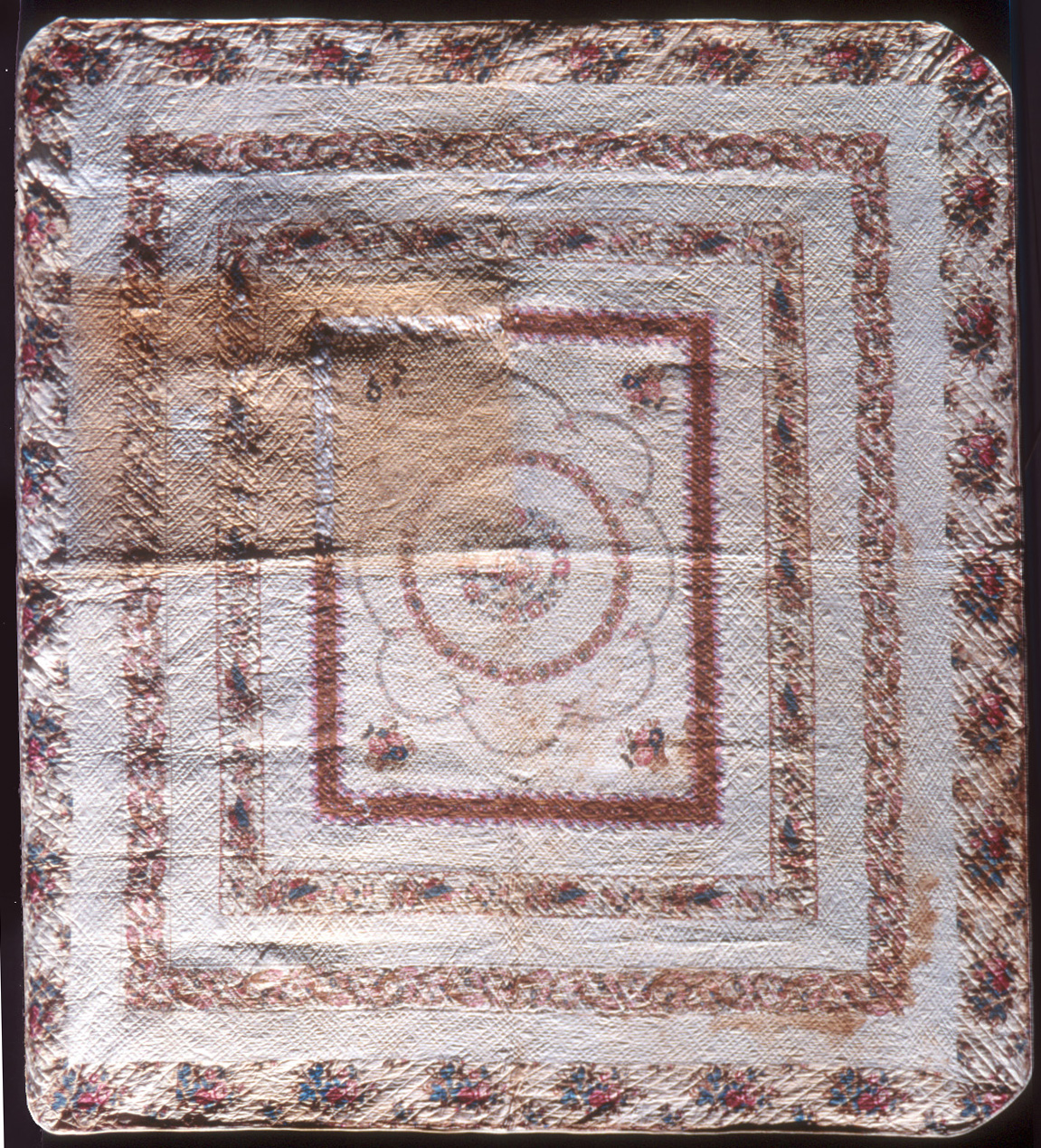 The Appliqué Medallion Quilt, also known as the Abigail Adams Quilt, is a representation of a Medallion quilt, a style popularized in early American quiltmaking. Medallion quilts are characterized by a central motif surrounded by a number of borders. In this case, the center of the quilt was cut from a piece of printed cotton chintz, which was then appliquéd to a white cotton background. This technique is often called broderie perse, a French term for “Persian embroidery.” Motifs were cut from large printed panels, often imported from England, frequently originating from India or with an Indian influence. Clusters of floral sprays arranged in a wreath-like formation of concentric circles create the center medallion of the quilt. Bordering is a series of three chintz borders, which alternate with bands of white until ending with a fourth, and final chintz border. The quilt is bound with a commercial white tape. Quilting designs consist of tightly spaced cross-hatching throughout the quilt, with parallel diagonal lines quilted into the last border. The Chamberlain Memorial Museum, the quilts previous owner, for years displayed this piece folded and exposed to strong light. As a result, regrettably, a quarter of the quilt was badly damaged by sunlight.

The Michigan State University Museum acquired this quilt from the Chamberlain Memorial Museum of Three Oaks, Michigan in 1952. The story that accompanied the quilt attributed its making to Abigail Smith Adams, the wife of the second President of the United States, John Adams. Abigail Adams was alleged to have made the quilt for her sister, Blanch Smith of Weymouth, Massachusetts. Blanch was reported to be the wife of Reverend Jedediah Chapman.

Preliminary research disputes the story of the quilt’s provenance, pointing to some confusion in the accuracy of its reported history. Examining known historical facts and looking at primary sources such as letters and census records becomes an essential part of an investigation such as this. Abigail was a prolific letter writer, so many primary sources exist to search for clues regarding the people she encountered and the activities she engaged in. Although Abigail’s maiden name was Smith, she did not have a sister named Blanche. Her sister’s names were Mary and Elizabeth. Both sisters were married to ministers, a fact that corresponds with the quilt’s story. The Weymouth Vital Records contain no listing for Blanch Smith Chapman or Reverend Jedediah Chapman in births, marriages, or deaths. A search of Massachusetts’s census records from 1800 by Lynne Bassett, textile curator at Old Sturbridge Village, found six Jedediah Chapmans in Ipswich, Massachusetts. Ipswich is located to the north of Weymouth. None of them are listed as being a minister. One of the Jedediahs was married to a Mehitable Smith on December 3, 1767. This Smith is the closest surname match to Abigail that has so far been located. No connection has been established between Jedediah and Mehitable Smith Chapman and Abigail Adams.

Further distancing the quilt from Abigail Adams are observations on the date of the quilt made by quilt historian Merikay Waldvogel. Looking at the fabrics used in creating a quilt and the timeline of their availability is another important factor when investigating a quilt’s history. Waldvogel estimates that the chintz found in this quilt was printed no earlier that 1825, most probably dating between 1830-1840. Even the earliest of these dates falls after Abigail’s 1818 death.

Research is continuing on this mysterious quilt. Its connection to Abigail Adams remains fascinating and is still being examined. The quilt serves as a marvelous example of how to dissect a piece of material culture through a multiple methods of investigation.

President of the United States

Notes on condition, damage, or repairs:

Fabric structure of the binding?

How wide is the binding (measure the top only)?

There is much debate over whether the Abigail Adams connection is true. See MQP file for more research about this quilt. Appliqued medallion style quilt made by Abigail Adams, wife of John Adams, second president of the United States. Made for Blanch Smith of Weymouth, Massachusetts, wife of Rev. Jedediah Chapman, and sister of Abigail Adams. Original # 70376. Donor: Mrs. E.K. Warren. The quilt was exhibited for years at the Chamberlain Memorial Museum, and was very badly damaged from sunlight. On one side a sun scorched mark appears where the fabric is dark brown, and the printed fabric is completely gone, with the cotton batting exposed. The quilt is bound with commercial tape, white.

Made for Blanche Smith of Weymouth Massachusetts, wife of Rev. Jedidiah Chapman and sister to Abigail Adams. The quilt came to the Michigan State University Museum in 1952 after being displayed for years at the Chamberlain Warren Museum in Three Rivers, Michigan.

There is much debate over whether the Abigail Adams connection is true. See MQP file for more research about this quilt.