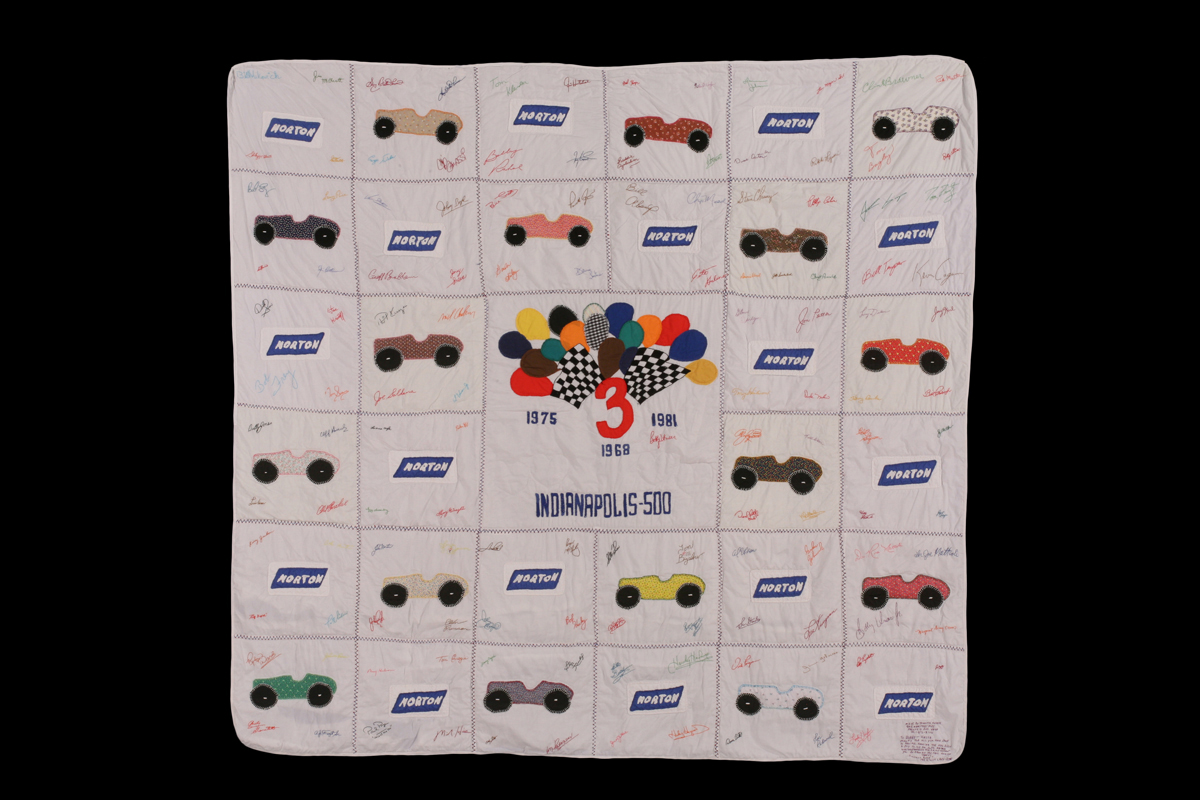 If this quilt is owned by a museum, enter the accession number here

What is the name of the quilt given by the owner?

Are there any stories about the quilt maker?

On May 30, 1932, the day that Jeanetta Pearson Holder was born in Kentucky, racecars sped around the track at the Indianapolis Motor Speedway about 250 miles to the north. The timing of Jeanetta’s birth was certainly a hint of things to come: she would grow up with a passion for auto racing, and as an adult, become that sport’s “Quilt Lady.” For nearly 35 years, Jeanetta has combined her love of auto racing and her sewing talents to create unique quilts for winners of the Indianapolis 500 and other auto races. As a little girl growing up on a Kentucky farm, Jeanetta made her own small racecars out of tobacco sticks and lard cans which she “raced everywhere [she] went.” Jeanetta’s childhood creative streak soon extended to sewing. By the time she was 12, Jeanetta began sewing quilts, filling them with cotton batting from cotton she grew herself. As a young woman, Jeanetta started going to the race track. Soon she was speeding around an oval dirt track at the wheel of a 1950 Hudson at Beech Bend Park in Warren County, Kentucky. In the early 1950s, women racecar drivers were uncommon--and so was safety equipment. Jeanetta was dressed in a t-shirt and blue jeans for these regional races. Jeanetta soon left behind her experience as an amateur racecar driver for a career as a wife, mother, and decorator. She and her husband moved to Indianapolis in 1953. Jeanetta--who attended her first Indianapolis 500 race in 1950--remained a racing fan, collecting autographs from drivers whenever she had the chance. In the mid-1970s, a friend suggested that Jeanetta use her sewing talents to create a racing-themed quilt that included these signatures. That same year, Jeanetta presented the finished quilt to 1976 Indianapolis 500 race winner Johnny Rutherford. In the years since, Jeanetta has looked through her pile of fabric and embroidery thread and cut her own quilt design patterns out of newspaper to create over 75 racing-themed quilts. She has presented them not only to winners of the Indianapolis 500, but also races like the Pocono 500, the California 500 at Ontario, the Norton Michigan 500, and NASCAR’S Brickyard 400.

Who made the quilt top?

Who did the quilting?

WHERE WAS THE QUILT MADE: City:

Choose the time frame that best describes when the quilt was made.

If the date was estimated by an antique dealer, quilt historian or appraiser, enter that date.

This quilt was made to be used as a

How is this quilt used?

Choose the gender of the quilt maker(s).

What is the quilt maker's birthdate?

Where was the quilt maker born (state)?

What environment did the quilt maker(s) live in?

When did the quilt maker begin making quilts?

How many quilt has the quilt maker made?

What type of quilted object is this?

What is the shape of the quilt edge?

What is the shape of the corners?

Choose the best color scheme description for the quilt.

What is the best description of the quilt's condition?

Enter the exact inscription here, including dates in the same form in which they appear on the quilt. Do not correct any spellings.

MADE BY JEANETTA HOLDER/ TO BOBBY-UNSER/ THANKS FOR ALL YOU HAVE GAVE/ TO RACING. KNOWING YOU HAVE BEEN/ A JOY TO BE. I'M SURE RACING/ WOULD NOT HAVE BEEN THE SAME WITHOUT/ YOU. SO FROM ALL THE FANS AND ME/ THANKS/ "MUCH LOVE"/ THE QUILT LADY JNET

What is the layout (or set) of the quilt?

How many blocks are in the quilt?

What size are the blocks?

What size is the medallion?

How are the blocks arranged in the quilt?

How are the blocks spaced in the quilt?

If one shape is used throughout the quilt, what is that shape?

Enter the number of different block patterns used in the quilt.

What types of fiber were used to make the quilt top?

What types of prints were used to make the quilt top?

What piecing method was used to make the quilt top?

What applique method was used to make the quilt top?

What embellishments were used to make the quilt top?

What embellishment materials were used to make the quilt top?

What fibers were used to make the quilt back?

If you chose Other, please describe the fiber used in the quilt back.

What color is the back of the quilt?

How do you describe the quilt back?

What fiber type was used to make the quilt binding?

What is the structure of the fabric used to make the quilt binding?

What construction technique was used to finish the edge of the quilt?

What is the width of the binding (front side only)?

half inch - one inch

What is the fiber content of the quilt filling?

Choose the thickness of the quilt filling that best describes the quilt.

How are the quilt layers held together?

Describe the fiber content or type of quilting thread used on the quilt.

Describe the color(s) of thread used to hold the quilt layers together.

How many quilting stitches are there per inch? Count only the stitches on the top.

Describe any background/fill patterns used in the quilt design.

How did the owner acquire this quilt?

Jeanetta Holder met and got to know many racecar drivers, especially Bobby and Al Unser. Bobby Unser’s 1981 Indianapolis 500 win became one of the most controversial finishes in racing history. Unser won the race, but was stripped of his win the following morning in favor of second place driver Mario Andretti. Since Jeanetta was to present the winning driver with a quilt the day after the race, she gave the 1981 quilt to Andretti. Unser was ultimately awarded the win in October 1981, after a lengthy appeals process. In the wake of this dispute and to mark his three Indianapolis wins (1968, 1975, and 1981), Jeanetta decided to make Bobby Unser this special quilt.

Who is the copyright holder?