The Quilt Index is a growing database featuring thousands of quilts dating from the 1700s to the present. This comprehensive resource provides free access to quilt images and information for teachers, students, researchers, and the general public. The Quilt Index can be used in many educational settings -- from elementary school math to university level history classes, bringing subjects such as American history, women’s history, and American folk art traditions alive for students by putting thousands of historic quilts at their fingertips.

The Quilt Index staff has developed several thematic areas by which you can now browse Quilt Index content.  Many of these themes feature pictorial quilts, such as quilts depicting animals, foods, holidays, music, outer space, trees, or U.S. history.  For more information on using these and other quilts in the classroom, please visit the Quilts & Curriculum section of the Quilt Index Wiki at http://www.quiltindex.org/~quilti/wiki/index.php/Quilts_%26_Curriculum. 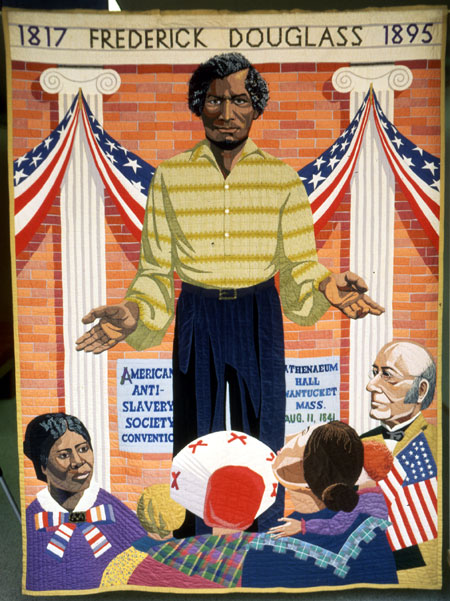 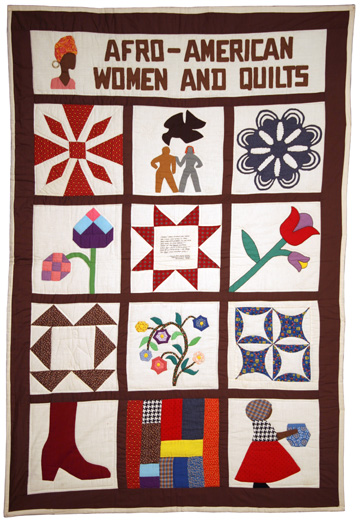 Afro-American Women and Quilts is the only quilt that Cuesta Benberry made. In every block of this sampler quilt, Cuesta uses a visual symbol to pay tribute to quilts made by different African-American quiltmakers. 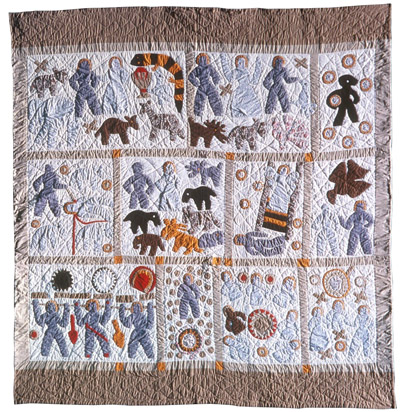 This copy was purchased from the Speigel Company mail order catalogue as a study/teaching specimen. It has value as a copy of Powers' quilt but also as an excellent example of the way in which quilts have achieved such enormous popularity that commercial companies are contracting these reproductions for sale to mass markets. This quilt, like many other reproduction textiles, was made in China. 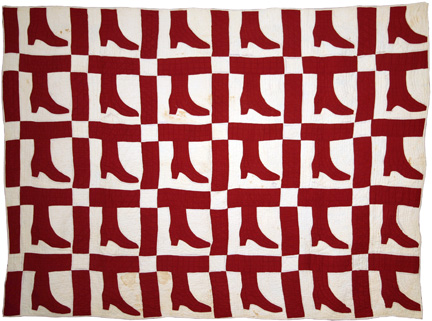 Fanny Cork was Cuesta's husband's grandmother. Cuesta believed that Fanny cut the shoe shaped without using a pattern. The Payless Shoe Company used this quilt in an advertising campaign. The quilters of rural Gee’s Bend, Alabama first received national attention during the 1960s when they were a part of the Freedom Quilting Bee, a cooperative that sold quilts through outlets that included Bloomingdales and Sears. It was not until 2002, when the quilts were packaged into the exhibition The Quilts of Gee’s Bend and vigorously promoted in the media, that interest in these quilts skyrocketed. Although other exhibitions had exhibited quilts as art and simultaneously revealed the stories of the people and communities who made them, The Quilts of Gee’s Bend exhibition is credited with bringing this way of displaying and interpreting quilts to the attention of art and media critics. Each of the 49 blocks in this quilt is devoted to a different figure important in African-American history and includes an embroidered portrait, the person's name, their birth/death date, and a note about their accomplishment. The embroidery is in green, red, and black embroidery floss—the colors of the Pan African Flag. This flag originally created as the official banner of the African Race by the members of the Universal Negro Improvement Association (UNIA) and African Communities League. It was formally adopted by UNIA in article 39 of the Declaration of Rights of the Negro Peoples of the World on August 13, 1920 during their convention held in New York City. The flag and the colors became an African nationalist symbol for the liberation of African people everywhere. 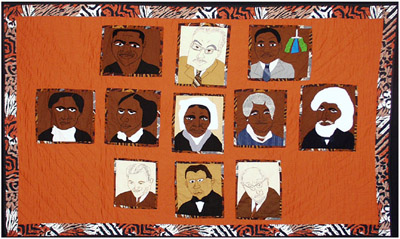 Idlewild, located in rural northwestern Michigan, holds a special place in the nation's segregated history. For many years, this "Black Eden" was one of only a few resorts in the country where African-Americans could vacation and purchase property. From 1912 through the mid-1960s, Idlewild was an active year-round community and was visited by well-known entertainers and professionals from throughout the country. At its peak it was the most popular resort in the Midwest and as many as 25,000 would come to Idlewild in the height of the summer season to enjoy camping, swimming, boating, fishing, hunting, horseback riding, roller skating and night-time entertainment. When the 1964 Civil Rights Act opened up other resorts to African-Americans, Idlewild's boomtown period subsided but the community continues to be an important place for vacationers and retirees. Idlewild also holds special meaning as a place for younger generations of African-Americans seeking to learn about their heritage. “Strange Fruit is named after a song by the late Billie Holiday, and it’s dedicated to Ida Bell Wells-Barnett, an African American Newspaper journalist born in 1862, who fought for an anti-lynching law. The story of my Quilt began with an episode of the Oprah show. Her guest had written a book entitled The Face of Our Past, a book dedicated to African American Women. The book was filled with marvelous photos, but one picture was not so marvelous. It was a post card of a mother and her son who had been lynched side by side from a bridge. Until that moment, it never occurred to me that they lynched women, also. Photos were often taken of people who had been lynched. These pictures were called post cards because that was what they were. I have a son who at the time was only five. I thought, if an angry mob came after my boy what would I do? Who do you turn to for help when the whole town is coming after your child? I began to pray, "Father God, someone needs to do something about this." These people need to be known, if not their stories, at least their names. I believe the spirit of the Lord spoke to me, "Find their names and make a quilt."

“Strange Fruit weighs 12 pounds and its 10' long by 10'6" wide. The fabrics are various shades of black. In making this Quilt, I learned that it didn’t matter who you were. It didn’t matter how old you were. It could happen to anyone, anywhere, and anytime. I did this Quilt in loving memory of my people, people I have never met, people whose names are not only woven into the fabric of this Quilt, but also into the fabric of my heart.” A replica of the one that the artist made as a fundraiser for the campaign for Barack Obama’s campaign for the 2008 U.S. Presidential election; specifically it was made as part of the The Obama Craft Project: Crafting for Change. The phrase Yes We Can, became THE campaign slogan and the phrase is now the subject of scholarly interrogation. Dr. Wolfgang Mieder, MSU CAL Disintguished Alum and internationally recognized proverb scholar, recently authored “Yes We Can”: Barack Obama's Proverbial Rhetoric (Peter Lang Publishing; 2009). Dr. Mieder and MSUM curator MacDowell published the article, "'When Life Hands You Scraps, Make a Quilt': Quiltmakers and the Tradition of Proverbial Inscriptions" in Proverbium: Yearbook of International Proverb Scholarship; 27:2010. The image of the quilt will be included as an illustration.