Texas’s legendary Miss Ima Hogg (1882-1975) once remarked that she had heard that collecting was a disease and that she thought she must have had it from childhood. A zealous and inveterate collector, Ima Hogg devoted more than fifty years to acquiring American furniture, paintings, sculpture, ceramics, glass, and textiles, including quilts. In the 1960s she even acquired historic Texas houses, including two built in the first half of the 19th century.

The only daughter of Texas Governor James Stephen Hogg, Miss Ima, as she often was called, followed her father’s example of public service. She involved herself in a wide range of philanthropic projects and expanded her interests to include historic preservation. Then, in the 1950s and 1960s, Miss Hogg combined her passions for collecting, philanthropy, and historic preservation by donating three remarkable historic properties to the people of Texas: Bayou Bend, Winedale, and the Varner-Hogg Plantation.

Bayou Bend, in Houston, was built between 1927 and 1928 as a residence for Miss Ima and her brothers. Its fourteen acres feature a twenty-eight-room house surrounded by extensive gardens. In 1957, Miss Hogg chose the Museum of Fine Arts, Houston, as the new home for the majority of her collections of American decorative arts. Today Bayou Bend serves as the museum’s decorative arts branch. Its period room settings, including a Texas Room, showcase American decorative arts from 1620 through 1870. Bayou Bend’s textile collection includes eleven quilts collected by Miss Hogg or donated to the museum by her estate.

The Varner-Hogg Plantation is located in Brazoria County on land originally settled by Martin and Elizabeth Varner in the 1820s. The property, at one time a successful sugar plantation, later became the cornerstone of the Hogg family’s wealth through its oil fields. Former Governor Hogg bought the property in 1901, and the Hogg family used its plantation home and out buildings on weekends and vacations. In 1958, Miss Ima donated the restored and furnished structures and the land to the State of Texas to commemorate her father and as an educational site. The state’s Texas Historical Commission administers the sixty-six-acre Varner-Hogg Plantation State Historical Site. Varner-Hogg’s quilt collection contains thirty-two quilts collected by Miss Hogg or donated by her estate. 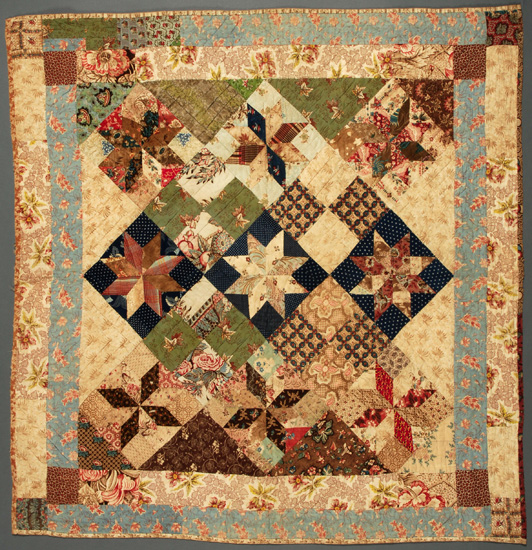 Conversation Print with motif in stripes containing an anchor draped with a banner bearing the word T E X A S and a Lone Star below; also with a crossed rifle and sword. In brown and cream.

Winedale attracted Miss Hogg’s attention in 1963 when a friend showed her a historic home in Fayette County that featured interior decorative painting. Miss Hogg decided to buy and restore the 1830s house on its original site as a showcase for some of her nineteenth-century Texas and Pennsylvania German furniture and decorative arts objects. In 1967 she donated Winedale to the University of Texas as a museum and conference center to promote the study of the ethnic heritage and cultural history of the area. The Briscoe Center for American History, The University of Texas at Austin, now administers the Winedale Historical Complex. The Briscoe Center partners with the Alliance for American Quilts on projects to document and preserve America’s quilt heritage. The center’s Winedale Quilt Collection contains seventeen quilts collected by Miss Hogg or donated by her estate.

The fabric used in this comforter is historically important. It is cited in Herbert Ridgeway Collins, Threads of History: Americana Recorded on Cloth, 1775 to the Present (Smithsonian Institution Press, 1979), p. 124. Collins describes this fabric as a roller printed cotton depicting Gen. Zachary Taylor in the Battle of Resaca de la Palma. Collins notes that "The design is known as as a mise en scene, depicting a succession of events at Resaca from selvage to selvage." Gen. Taylor appears in the upper left hand corner of the scene; he is the tiny figure giving instructions. The comforter top is constructed of three vertical lengths of this fabric." Zachary Taylor was a popular subject for American roller-printed textiles. There are several of Taylor and they are typical of a large group of textiles printed in drab shades of brown, green, and ochre on loosely woven cotton in the mid 19th century."

Miss Hogg’s selection of quilts was driven by her quest to share the early cultural heritage of the United States with its citizens. She focused her collecting efforts on quilts of outstanding craftsmanship in a variety of quilt types and patterns. Only a few records exist that document where or from whom Miss Hogg acquired the sixty quilts she collected and placed at Bayou Bend, Winedale, and the Varner-Hogg Plantation. These records indicate that she bought quilts at auction houses in New York City, where she maintained an apartment, and at antique stores during her frequent road trips in Pennsylvania, Connecticut, and Massachusetts. 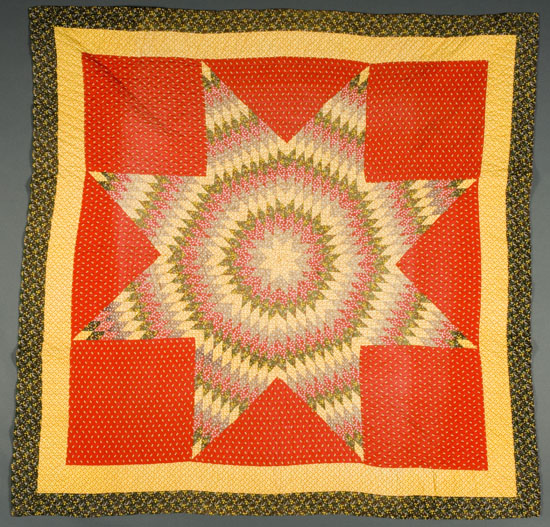 Quilted in diagonal tiles with many floral and leaf designs. Diagonal parallel lines in the background.

Miss Ima’s special interest in early American decorative arts led her to acquire more than ten wool wholecloth quilts that span the period from 1760 to 1850. Wool whole-cloth quilts commonly were constructed of joined lengths of glazed wool called “calimanco,” which was often imported from England. Their characteristic sheen was achieved by various means, including rubbing the fabric with a stone or running it between rollers. The resulting glaze made calimanco an ideal surface for elaborate quilting, giving it a raised effect. At Bayou Bend, for example, there are five wholecloth quilts, including ones in salmon, pink, dark green, and indigo wool. Varner-Hogg also owns five wholecloth quilts, and the Winedale Quilt Collection contains one.


The quilt collection at the Varner-Hogg Plantation State Historic Site also contains several log cabin and crazy quilts as well as a U.S. Centennial commemorative quilt featuring a sashing of red stars between rows of blue stars on a white ground with “1776” and “1876” and “Centennial” interspersed. The Ima Hogg quilt collection at Bayou Bend includes another form of wholecloth quilt, a cotton whitework quilt, ca. 1859-1861. It features an eagle spreading its wings and holding olive branches and spearheads in its talons; thirty-three stars float above. Miss Hogg acquired this quilt in Connecticut in 1963. 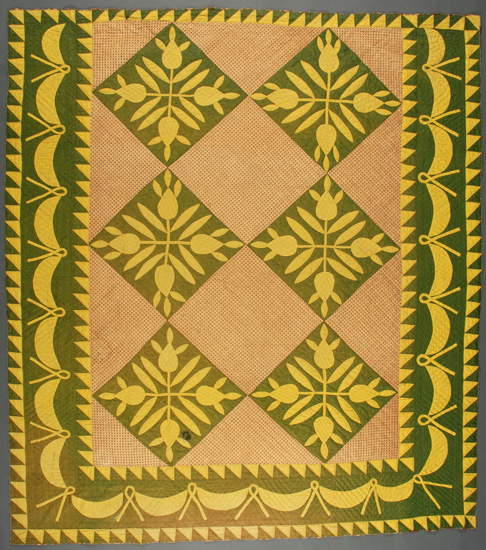 All of the Ima Hogg quilts in the Winedale Quilt Collection are in the Quilt Index. Unique among this collection are a green and yellow Pineapple quilt inscribed Hannah Reist 1849; an 1848 comforter whose fabric commemorates the capture of General la Vega by Captain May at the Battle of Resaca de la Palma in May, 1846, at the beginning of the Mexican War; and a Le Moyne Star crib quilt, ca. 1830-1876 with a unique Texas motif backing.

Miss Ima’s passion for the decorative arts and quilts continued right up until the time of her death in August 1975. Collection acquisition records at Bayou Bend indicate that she was negotiating for an oil portrait that summer. As for quilts, on May 15, 1975, Miss Hogg purchased two quilts at Sotheby Parke Bernet in New York City: a Mariner’s Compass quilt inscribed 1852 and a ca. 1840-1860 appliqué quilt featuring stylized floral blossoms. At the time, Ima Hogg was just two months shy of her ninety-third birthday.

The quilts Miss Ima Hogg collected and placed in her historic properties are part of her extraordinary decorative arts legacy to the people of Texas and the nation. Just as their makers brought artistry to their craft of quilt making, Miss Ima brought her keen eye for excellence to her passion for collecting. We are fortunate indeed that these remarkable works by many women have been preserved for our study, enjoyment, and inspiration by the work of one very special lady.

Katherine Adams is Quilt Curator at the Briscoe Center for American History, The University of Texas at Austin.
2010
All rights reserved