The quilt ceremony is about honoring people... in this manner, they show support for a loved one. They bring their most highly prized possessions to the giveaway. Translated from the past to the present Native American culture, giveaways reflect the depth of family pride exhibited toward their family members. When you are honored, you know you are held in high esteem by the family.
---Spike Big Horn1

One of the most distinctive uses of quilts in Native communities occurs as part of the annual high school boys' and girls' basketball tournaments in Montana2, when star quilts are given away by team members from high schools on the Fort Peck Reservation to individuals who, in some way, have contributed to the basketball season. These have become important occasions not only for the athletes and their families but also for the entire community. The basketball tournament star quilt ceremony is a public statement of tribal heritage that reinforces the tradition of honoring respected and loved individuals.3 As witnesses to the ceremonies and frequent recipients of the quilts, non-Natives participate in an event that increases their awareness and understanding of those values and beliefs.

In the northeast corner of Montana's Big Sky country lies For Peck Reservation, home to six thousand of the ten thousand enrolled members of the Assiniboine and Sioux tribes. Each tribe is composed of various bands: the Sioux include Sisseton/Wahpetons, the Yanktonais, and the Teton Hunkpapas; the Assiniboine bands include the Canoe Paddler and Red Bottom.4  Both tribes have a long history of cooperative coexistence and unity in the face of encroaching non-Native settlement in the region.

In 1871, the Fort Peck Indian Agency was formed to serve Native peoples living in this region, with government boarding programs initiated in 1877. The reservation's first missionary schools were established by the Presbyterians and the Mormons in the early twentieth century.

According to many oral and written accounts, it was at these schools that quilting was first introduced to Native women. Although many patterns were learned, the star has become perhaps the most popular. Anthropologist Nancy Tucker indentifies the pattern as arriving at Fort Peck Reservation through contact with the Dakota Presbytery missions. She reports how Nellie Clark "recalled bringing a star quilt back from a Presbyterian school she attended in South Dakota in about 1908," and one Lorena Sheilds "remembers her mother, Louise Red Lightning, working on star quilts with the Dakota Presbytery women at Fort Peck between 1915 and 1920."5 Catherine Spotted Bird gives yet another account: "The late Nina First of Fort Kipp, Montana, went to a church mission meeting in South Dakota in the 1920s... [where she] saw the star quilt for the first time and brought it back."

Star quilts, sometimes also called morning star quilts or star blankets, have become a central feature of numerous giveaways ceremonies in the community and hold special meaning for both those who make them and those who receive them as gifts. Star quilts are made to honor military veterans, dignitaries, and for giveaways at powwows, baby naming ceremonies, and funeral ceremonies, where they are draped over the casket before being given to officiating clergy and pallbearers. Quilts are also used to honor individuals who have demonstrated achievements in academic or athletic pursuits.

The star quilt itself has become a popular symbol of Sioux and Assiniboine identity. Star quilt designs now appear on powwow posters, as part of dance regalia, and even on T-shirts and baseball caps. But on the Fort Peck Reservation, it is the star quilt's link to the long-standing tradition of honoring ceremonies that is most significant.

The Origin of a Tradition
The basketball star quilt ceremony sprung from an act of honoring at a 1947, Brockton, Montana, basketball game. Tessie Four Times, grandmother of one of the players, expressed her pride in her grandson by wiping the sweat from his back with a shawl and then casting the shawl on the floor for anyone to pick up. This act can be traced to a Native custom of honoring those in battle.7

Years later, during discussions at a Red Eagle Presbyterian Ladies' Society meeting in early 1964, it was suggested to again honor Brockton players in this way. Along with other women in the community, the group began making star quilts in preparation for a giveaway at an upcoming game. In February 1964, during the halftime of the last game of the Class 2-C District Basketball Tournament in Sidney, Montana, members of the Brockton team carried those star quilts into the gym and spread them on the floor. Then each team member gave a quilt to the coaches from each school participating in the tournament, as well as to other honored individuals. Every year since, the ceremony has been repeated at the district level tournaments and, when teams advanced in tournament play, also at the divisional and state levels. as each ceremony requires the production of new quilts, almost every member of the community has become involved in one way or another.

The importance of star quilts is evident on a year-round basis at Brockton High School, where Native language instructor Viola Spotted Bird teaches a quiltmaking class for students and teachers. Star quilts hang on the gymnasium walls along with plaques listing the honorees. Athletic team booster clubs raise funds by selling lapel pins of team members photographed in front of star quilts. The school yearbook, Ho-Tanka, or Big Voice, carries a feature on the tournaments and ceremonies.

The 1996 Basketball Tournament Ceremony
Regardless of the number of wins or losses during regular season games, every Montana high school boys' team plays in the season end state tournament. In 1996, the boys' basketball team at Brockton High School, although ending the season with more losses than wins, prepared for its upcoming play-off games while family and friends prepared for the quilt ceremony by beginning to make or commission star quilts. Each team member presents at least one quilt to someone he chooses to honor for his sportsmanship, character, or some special act that deserves recognition. Team members keep the name of each person they want to honor to themselves until the ceremony, sometimes finalizing their decision only moments before the event.

During the week immediately before the game, Brockton High School teachers Paul Westberg and Kathy Nielsen oversee the Star Quilt Extravaganza, in which all the students create a star quilt design on paper. Designs are posted on a classroom wall and votes are cast for the most innovative or beautiful designs. Family members often work right up to the last minute to complete quilts for the honoring ceremony at the district basketball tournament in 1996. Here, Keevin Lewis and Kurt Dewhurst interview Judy and Ben Johnson as they work on quilts made for their son Terrance. 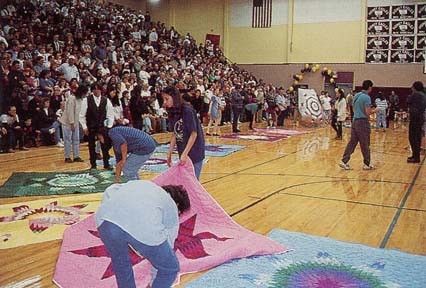 Shortly before the ceremony commences, team members and their families gather to view quilts, to make final decisions about recipients, and to organize the procession. In this photo, Golden Walking Eagle shows off the star quilt he will use to honor a member of one of the opposing teams.

On game day, the Brockton team arrives at Sidney High School wearing warbonnets, as is the tradition for tournament games. Although the game ends in their defeat, they quickly turn their attention toward the following evening's star quilt ceremony.

The night of the event, Leland Spotted Bird, the master of ceremonies, joins the group to supervise the order of the procession and carefully record the names of the parents, player, and honoree. When the last game before the championship game has only five minutes left, the group starts toward the gymnasium. Flanked by parents, elders, and other family members and holding quilts over folded arms, team members form a processional line, with team captains first, followed by players in order of seniority, and then cheerleaders and managers. Star quilts are carfully spread on the gymnasium floor as the honoring ceremony begins. 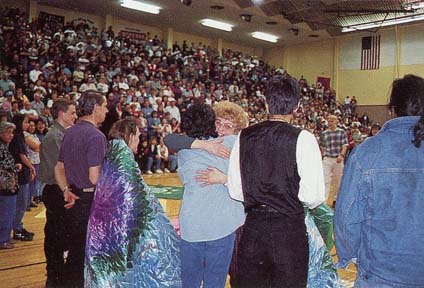 Recipients of a quilt in honor of their son embrace quilter Judy Johnson. Star quilts are placed around the shoulders of the receiver.

Each family spreads its star quilt out on the floor in front of them. With more than twenty spectacular quilts, the gym is soon transformed into a visual display. Spotted Bird explains that the quilts cannot be presented directly to a player because the state high school amateur athletics rules do not allow athletes to accept gifts worth more than $25. However, the quilt can be given to the parents of the player to be honored, which also honors them for their parenting role.

Spotted Bird then announces the honorees, and when the final quilt is presented, a recording of an honor song is played. As he describes the meaning of the song for the crowd, the Brockton team, their parents, and honorees join hands and circle the floor in an honor dance. Brockton High School Teacher, Paul Westberg was the recipient of six star quilts. This one was presented by DeWayne Boyde. This one was presented to Paul Westberg by LaVonne Black Dog. 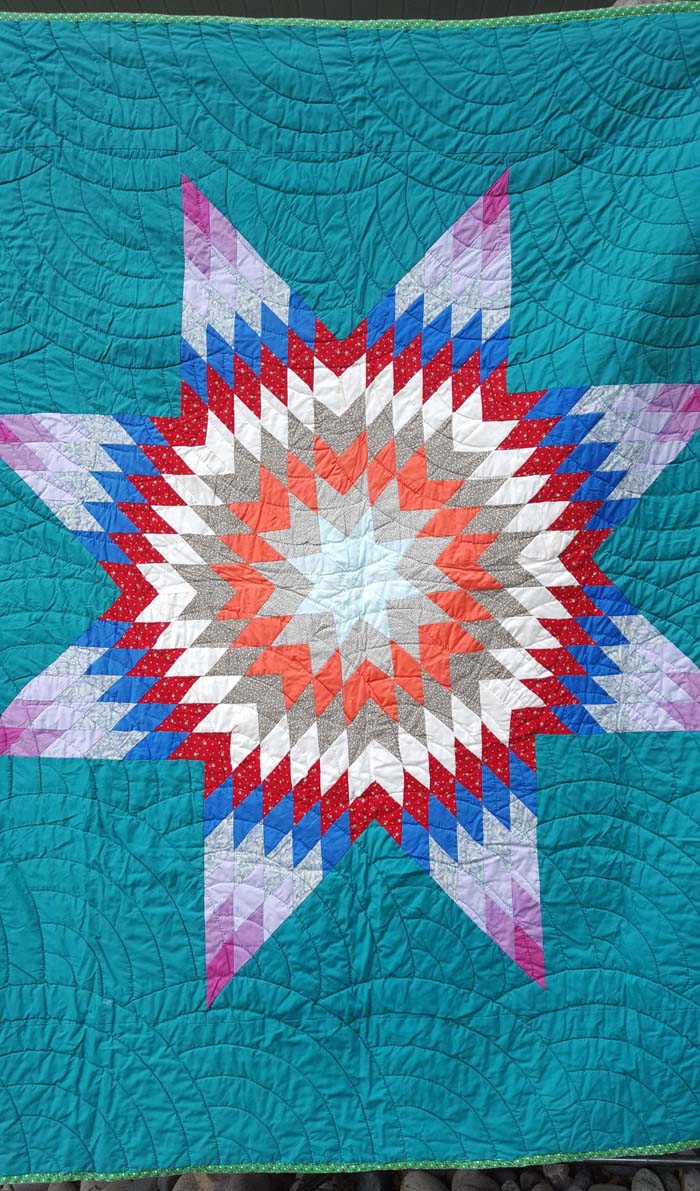 This one was presented to Paul Westberg by ElWayne Spotted Bird. 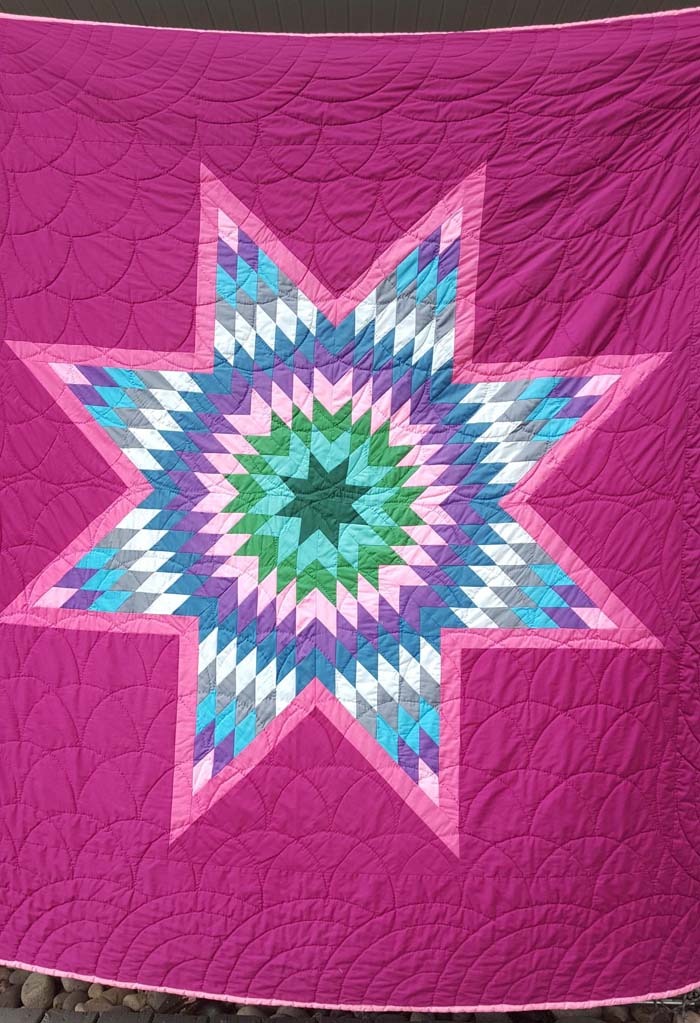 This one was presented to Paul Westberg by Stanley Long Tree. 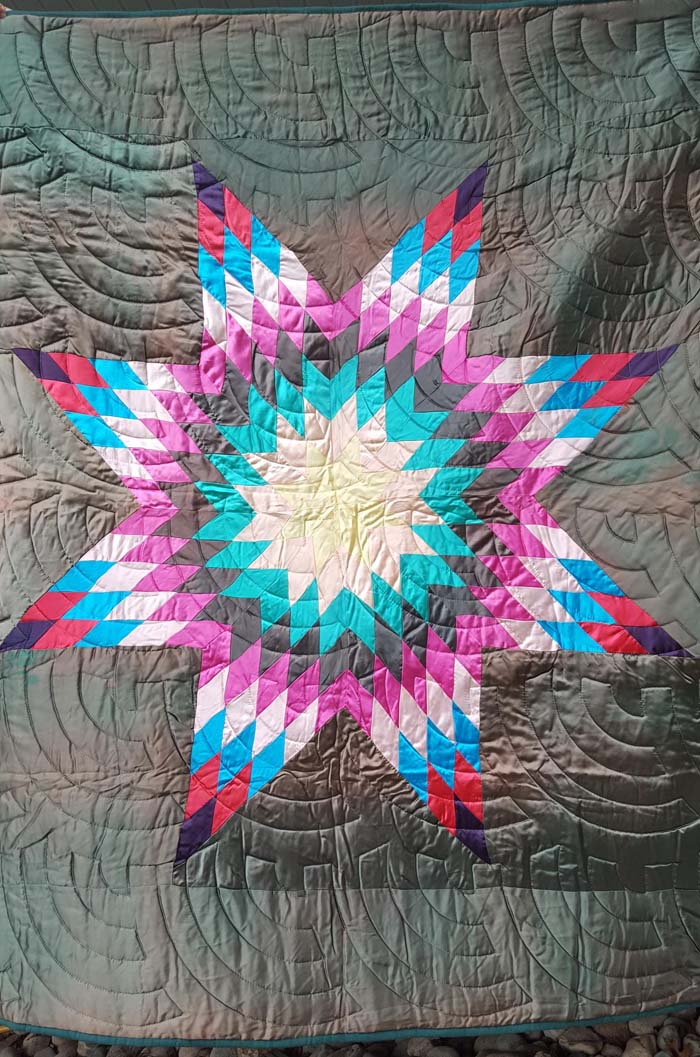 This one was presented to Paul Westberg by Rusty Boxer. This one was presented to Paul Westberg by Mikel Bruner.

Conclusion
The tradition of holding basketball tournament star quilt ceremonies has now spread to all three Fort Peck Reservation high schools, all of whom play in leagues that are primarily non-Native. The much-anticipated events attract sellout crowds filled with the parents and families of players as well as community members.

Through this ceremony, Sioux and Assiniboine have found a creative way to carry on a decades-old tradition. As old buffalo robes have been replaced by beautiful star quilts filled with love, comfort, and respect for those they honor, the basketball court has become a contemporary stage for an honoring ceremony that respects the coming of age, the passage of life, and the timelessness of Native values. Nearly all quilts made for the high school basketball star quilt ceremonies in northern Montana are done in variations of the star pattern, often incorporating a pieced or appliqued basketball. This quilt is made of satin, a material popular on the Fort Peck Reservation. These two quilts were collected by Kurt Dewhurst and Marsha MacDowell during their research.